Clarification: Observers here refers to the observer in the old Ember version (not sure if it is still there). It doesn’t contain event listeners. In older Ember versions, an observer is a function triggered when a value is changed. For example, a developer can define a function like:

An observer is a common pattern in large web apps and many frameworks support this pattern. I have also used this pattern a lot in my previous work but I think it’s a bad pattern. People may say observers make data binding easier. It’s true if your object model is well defined and needs no more development.

Suppose value B depends on value A. Value A may be changed in many different places. If we use the observer pattern, we only need to define an observer handler on B instead of adding code to fire a change B event in every place where the value of A is changed. That’s easier. However, what if in the future you want to change value A’s updating logic? For example, suppose there are currently two places where it will change value A to the same value. Let’s say they are place C and place D. In a new task, you don’t want to change B’s value if value A is changed in place C or you may want to change B to a different value if value A is changed in place C. Then you would need to add some special flag to the context which would usually be a complicated and ugly implementation so that B’s observer could read that flag and know the change is from place C. But if you directly call change value B function from place C and D instead of using observer, you only need to add one more input parameter to the change function which is easy in Javascript.

Another example is that suppose when you were implementing B’s observer, you didn’t know every place which changed value A. And based on your imperfect knowledge of A’s modification, you decided B’s observer logic and implemented it. Then later bugs will be fired for bad behavior when some uncovered places modify A’s value. Those uncovered places may even be out of your task’s requirement. But if you don’t use observer, you only need to implement B's and A’s dependency logic based on what you know and the task requirement. For those uncovered places, it either won’t cause any bad behavior in your task related to B or it is not necessary to have the dependency. People may say observers are good where they render data directly to view because there wouldn’t be complicated logic in rendering. But this is usually supported by HTML templates in most frameworks.

So I strongly recommend using as few observers as possible.

The event here is the only developer defined event. It doesn’t contain any browser events like (‘click’, ‘focus,’ etc.). A browser event listener is always fine to use. Compared to the observer pattern mentioned above, the event listener pattern is more flexible. However, I still don’t recommend using it. I think the event dispatcher pattern is mainly used in library and platform development because library/platform developers don't know how application developers want to handle events and they want to give the application developer more freedom in communication with platforms/libraries. For example, a web browser dispatches an event through JavaScript code so that the JavaScript application can handle an event at any level of the container and with any handlers.

However, within an application, there are cons:

Since web apps' UIs are usually developed by a single team, the team should completely know what logic should be triggered by a UI state change.  Therefore the main pros for the event dispatcher – listener pattern doesn’t make sense here. That’s why I don’t recommend this pattern.

There are many UI architectural patterns such as Model – View – Controller and Model – View – ViewModel. In each pattern, the terms “model” and “view” have slightly different meanings and responsibilities.

In the following discussion, I will use the Model – View pattern.

As the UI grows larger, the logic and code become very complicated, so we need to apply a good design pattern to make the code highly readable, easy to maintain, and stable. The complexities are mainly in two areas: 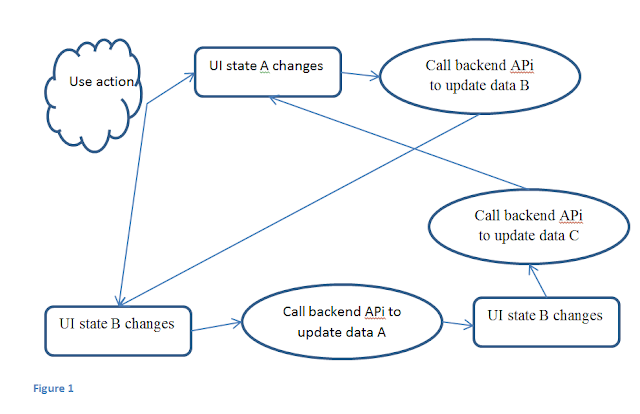 The above complexities could cause the following problems:

To address the above problems, we should:

Besides the major UI architectural problems discussed above, there are two minor problems:

The common solution to them is Object-Oriented Design. With OOD, we can put common logic in a basic function and extend it for a special component to add special logic. We can create a base class for a component which is most reusable. In a special application context, we can extend the base class to contain other components’ references in that context.

Sometimes when a bug happens, it is hard to figure out the root cause because the app is very large and complicated. To make debugging easier and avoid manually adding too much console.log code, we should develop some kind of JavaScript annotation (like @debug) which tells the compiler to add a console.log statement below the next statement containing  thenext statement’s necessary information like function return, property values, and so on.

Thus, to make it easy for analytics infrastructure developers to log the impressions, each component should implement an analytics interface which contains functions indicating if a component is impressed.

That's all for Part 2! Tune back in tomorrow when we'll wrap up this series by discussing large scale UI design and UI automation testing.

Published at DZone with permission of Swortal w. See the original article here.