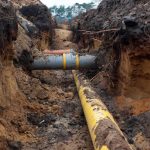 smart cities have been a hot topic of the past year or so, but much of the discussions have revolved around smarter management of the transport infrastructure in our cities. there are some fascinating projects underway that look at some of the less glamorous parts of urban life however.

for instance, i wrote a while back about a project that will use robotics to ‘self-repair’ cities. a group of small robots will be developed that can both identify problems in areas such as utility piping, street lighting, and road quality, before then fixing the problems themselves, all with minimal disruption to either the public or the environment.

the project is part of the engineering grand challenges research that aims to take on some of the biggest challenges currently facing the science and engineering worlds.

one interesting project is taking place in the sewers beneath the american city of cincinnati. the metropolitan sewer district of greater cincinnati (msd) aim to develop a ‘smart sewer’ that reduces the overflow into the cities rivers and creeks.

“our smart sewer system is anticipated to save tens of millions of dollars in capital investments in projects to control sewer overflows,” the team says. “this is our best chance of reducing spending and ultimately costs for our ratepayers.”

with budgets tight, the city had to think creatively and make more of the facilities they have. the approach they’ve taken is to create a system that is better able to respond to peaks and troughs in ‘demand’ in various areas of the city.

this allows msd to store flows in huge interceptor facilities located in various parts of the sewer system, with smart sensors used to detect and monitor flow levels and manage the gates and valves to direct flows to where there is sufficient space.

the system, developed by ayyeka , has helped the city to avoid 1.4 million gallons in sewer overflows in just a matter of weeks.

“the cost savings results from not having to build as many new capital projects to reduce the overflows, such as larger sewers and storage tanks,” msd says. “gray infrastructure in particular is very expensive and takes a long time to plan and construct.”

it’s the kind of no-brainer intervention that will increasingly come to define smart city projects. the project is believed to cost just $0.01 per gallon of overflow volume saved, compared to other commonly used methods, such as green stormwater controls that cost $0.23 per gallon or $0.40 per gallon for larger pipes.

of course, fascinating though the project is, it is also the kind of hidden venture that is unlikely to change the misperception people currently have around smart cities.

a report last year from the iet found that the public often lacks a real understanding of how smart cities will benefit them. the authors believe this is largely because those responsible for the roll-out of smart city type technologies seldom involve the public in their decision-making processes. this contributes to a distinct lack of buy-in by the public in the technology. what’s more, this is despite the early successes of platforms such as airbnb and uber.

when respondents were given a number of examples of what a smart city might offer them, however, they were rather more positive. for instance, there was a degree of support for things like smarter street lighting and buildings that were capable of both generating their own energy and dealing with their own waste. likewise, there was support for roads that were capable of supporting smoother traffic flows.

hopefully, therefore, projects like the smart sewer work being undertaken in cincinnati will help the public gain a better understanding of the ways smart sensors are supporting the flow of things in their city.

check out the video below to see more on the technology behind the project.