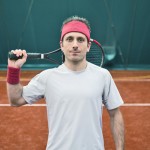 when i cycle indoors on my turbo trainer, a sweatband is an essential piece of equipment to try and manage the overheating that is an inevitable consequence of my activity.

ordinarily this garment serves the dual purpose of making me look silly whilst absorbing some of the copious amounts of sweat i generate during the hour or so on the bike.

alas, a team of researchers from uc berkeley may be about to give the humble sweatband a new lease of life.  their work, documented in a recently published paper , provides the sweatband with a number of capabilities, including telling the wearer whether they’re dehydrated.

it isn’t a particularly easy substance to measure and analyze however.  the researchers developed an integrated system that is capable of measuring multiple sweat analytes, before then transmitting this data to ones smartphone.

“having a wearable sweat sensor is really incredible because the metabolites and electrolytes measured by the javey device are vitally important for the health and well-being of an individual,” they say. “when studying the effects of exercise on human physiology, we typically take blood samples. with this noninvasive technology, someday it may be possible to know what’s going on physiologically without needle sticks or attaching little, disposable cups on you.”

the initial prototype device comes packed with five sensors fitted to a flexible circuit board.  these sensors measure things such as the skin temperature, electrolyte levels and glucose and lactate levels.

the temperature monitoring is particularly important as glucose and lactate sensors are heavily influenced by the temperature of the skin.  so, by taking the skin temperature on a regular basis, it allows the device to be calibrated and adjusted on the fly.

the measurements are then taken from the sensors via an array of integrated circuit chips, where the signals are amplified and adjusted for temperature changes before then being tramsitted wirelessly to the smartphone via an app.

put through its paces

the device was tested on dozens of volunteers as they engaged in a range of exercises both indoors and outdoors, including my favorite indoor cycling trainer.

the team are confident that the device will have value in the marketplace, and trumpet its versatility as a key selling point.

“we can easily shrink this device by integrating all the circuit functionalities into a single chip,” they say. “the number of biochemicals we target can also be ramped up so we can measure a lot of things at once. that makes large-scale clinical studies possible, which will help us better understand athletic performance and physiological responses to exercise.”

in the longer term, they hope to develop the device such that it is suitable for much larger, population level studies, with a potential to measure much more than just sweat.

it isn’t clear at this stage whether the team have commercial ambitions for their product, or any timeline for when it may make it to market.

nonetheless, it represents an interesting insight into what is technically possible, and offers a glimpse of how sportswear may progress in the coming years.

check out the video below for more information on the product.