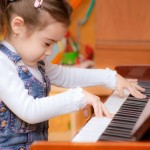 Last year I wrote about a new pair of smart glasses that had been developed by researchers at the University of Rochester that were used to provide live feedback on ones presentation as it was being delivered.

The service provides speakers with a recording of their speech, with their presentation analyzed in real time for things such as volume and speech rate.  This data is then presented to the speaker live to hopefully allow them to adjust either their cadence or volume (or ignore the advice altogether).

A team from Tufts University are now using smart glasses to try and help us to learn new skills.  The system, known as BACh or Brain Automated Chorales, aims to make it easier to novices to master the piano.

It begins by giving the learner a few simple tasks to perform on the piano whilst monitoring their brain activity as they do so.  The device is specifically looking out for oxygen levels, which it uses as a means of measuring the problem solving brain power being ploughed into the task.

With this information, BACh can tinker with the difficulty of the tasks being given to the learner so it’s in line with how they’re brain has coped with previous tasks.

This is all done via an algorithm that analyzes the data received from the users’ brain.  When the system was tested out on real students, the results suggest that those using BACh learned at a better rate than their peers attempting to learn without BACh.

It’s certainly an interesting approach, and whilst there are clear cost issues to be considered before such a method could be rolled out more widely, it does provide an interesting new avenue to explore.

You can see the system in action via the video below.  Let me know your thoughts in the comments below.