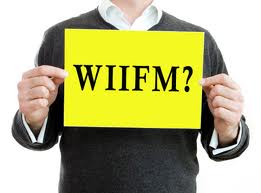 I have been engaged with a growing number of clients lately with discussions centred around the same topic; how do I get people adopting our Social Business platform? Well the bad news is that the old adage from Hollywood of “Build it and they will come” has never held true in the real world. And in regards to any new technology based initiatives it certainly has never been the case. The world is littered with the skeletons of well meaning intranets, business indicator dashboards and knowledge management systems, that were all beautifully designed and implemented, yet almost universally met with disaster as they were well under utilised. Admittedly cultural fit does play a major part in adoption and success of technology based change management programs, but I think the answer is simpler than that.

Success or failure can be boiled down to answering one simple question – What's in it for me?

Certainly as an average employee I would be interested in hearing from our CEO about how said initiative will allow us to compete better, better capture knowledge, get closer to our customers or build a better team working environment.

However, like most others when I hear an Executive extolling the virtues of their new program or enhancement to our working environment I view it with a scepticism based upon past experience. Is this yet another “lets try to do more with less” proposition? I mean, any employee with over 5 years experience today would have noticed that the expectations for working well beyond the standard hours put forward when we were first hired has become, not just the norm, but is now an expectation.

Take for example programs that I have seen developed around Social Learning.

Almost without fail, people participate in the online communities that are painstakingly designed and administered by HR, but engagement pails in comparison to what I have seen in engagement in 'informal' online employee communities. The key difference being that these informal communities, although set up for various, work related, interest groups, are just that – informal. People participate for personal reasons, whether it be to make there job easier but providing a place where others can find the information they need instead of filling up their inbox with requests or whatever other reason. The fact of the matter is that people participate in them for reasons that are almost as unique as the individuals themselves.

And while 90% of those in these communities don't actively contribute, the mere fact that they are in them and reading the content is learning. Learning without consciously doing so. These communities answer that question of 'what's in it for me' and based upon anecdotal evidence seem to gain higher acceptance and participation rate than those formally designed.

So what does that mean in the realm of Social Business initiatives?

1/ Consider using, for lack of a better word, 'a focus group as a proof of concept for your Social Business initiative. Educate them as to how others in the industry (and outside) have used similar tool sets to make their own life easier and then leave them to it. Naturally the choice of the particular 'focus group; will be of prime importance as well as team of knowledge workers, who need to collaborate and communicate with others within their group would be key as a first stage. The emphasis here is upon leaving them to their own devices to determine how, and if, said tool set can actually make their life easier – in turn driving the productivity which is secondary to their needs, but primary to that of the organisation.

2/ The second is to remember that trust takes ages to earn, is destroyed in an instant and almost never returns back to its original state. Because of that, yes measurement is necessary, but the role of the implementation team isn't one to judge. It's role is to promote what is recognised as best practice. Highlight the successes. Sure learn from the areas it didn't work, but make the team heroes within the organisation. Hold them up as an example of what they achieved and then take a step with another group and so on.

A big job? Certainly, but as they say. How do you eat an Elephant? Easy. Take one bite and chew like blazes! The same holds true for Social Business initiatives in the enterprise.