social media offers an opportunity to connect with your customers in an unprecedented way, allowing you to observe and direct the conversation around your brand. however, considering social media for your small business is a big decision. for the savvy business owner, the first step is research—which is why i dove into the tech support vertical to find 9 diverse examples we can learn from.

using social media to connect with your customers is exciting, but it’s also a long-term investment. you must be willing to continuously update your pages with fresh content and answer customers’ questions or concerns. the facebook and twitter pages for sri lanka-based company 24/7 techies started off promising, followed with frequent updates for months, but the most recent post is dated october 2013. 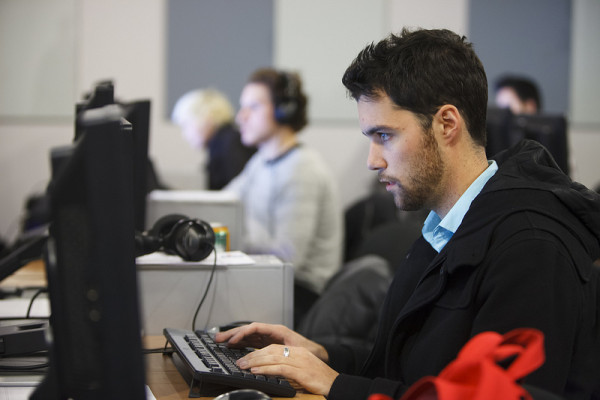 another rule of social media is to share often, so you can maintain and grow your share of mind with followers. acs services publishes interesting links and original content, but only about once every few months. this isn’t nearly enough content to make a difference—which is almost as bad as having no social pages at all. make a posting calendar to keep you on track!

cmit solutions is posting content frequently, and there’s a good balance between informational links and entertaining images. they’ve got the recipe right, but it’s time to start engaging customers by asking questions and opening dialogues—on both facebook and twitter. the fact that they have facebook pages for each location (some of which feature different content than the main page) might be confusing customers and diluting their influence.

considering the brand recognition geek squad has through its partnership with best buy, i’m surprised they don’t have more followers. (not to say nearly 40,000 isn’t a lot—i just expected the number to be higher.) the content of their posts is interesting and helpful, and they respond to commenters’ questions. perhaps they should be promoting their social channels more, through advertising or in-store. it wouldn’t hurt to up the frequency of posts, either.

the bulk of happy fox’s interaction is happening on twitter, which makes sense when you look at how interactive the staff is with twitter followers. customers love to connect with the companies and services they use—it makes them feel valued to know someone is listening and responding to them. if happy fox can bring this dynamic to their facebook page, they might be able to replicate their twitter success.

this us-based tech support company has more total followers than well-known competitors geek squad and at&t’s small business basics. while the numbers are impressive, it’s important to consider how well a company is engaging its followers. there’s a good balance between informative blog posts and fluffy entertainment, but the next step is encouraging comments and discussion.

coming in second in terms of total followers, this india-based tech support firm seems to be doing a good job of attracting users to its facebook page. one suggestion to consider—diversify the order of posts. there’s a very clear pattern here, with an overt advertisement every other post. being repetitive gets boring fast, so make sure not to fall in a rut!

if both of these social pages belong to supportsoft (known better as support.com), there is a branding issue between them. the facebook page uses the green color scheme found on their website, while the abandoned twitter profile uses an old red logo. looks like they gave up on using twitter, which is a shame considering how well they use the @ and # functions on facebook.

social media can open doors for your company and allow you to provide a higher level of customer service and engagement. if you decide to start facebook, twitter , or other social media profiles for your business, keep these tips in mind as you create your strategy. happy sharing!