One of my favorite books is Antifragile by Nassim Taleb where the author talks about things that gain from disorder. Nassim introduces the concept of antifragility which is similar to hormesis in biology or creative destruction in economics and analyzes it characteristics in great detail. If you find this topic interesting, there are also other authors who have examined the same phenomenon in different industries such as Gary Hamel, C. S. Holling, Jan Husdal. The concept of antifragile is the opposite of the fragile. A fragile thing such as a package of wine glasses is easily broken when dropped but an antifragile object would benefit from such stress. So rather than marking such a box with "Handle with Care", it would be labeled "Please Mishandle" and the wine would get better with each drop (would be awesome wouldn't it?).

According to Taleb, fragility, robustness, resilience and antifragility are all very different. Fragility involves loss and penalization from disorder. Robustness is enduring to stress with no harm nor gain. Resilience involves adapting to stress and staying the same. And antifragility involves gain and benefit from disorder. If we try to relate these concepts and their characteristics to software systems, one way to define them would be as the following.

Different systems are affected by different kind of disorder, such as stress, time, change, volatility, debt, etc. For software systems, the main disorder is the change. The business is in a constant changing environment and the software needs to adapt to the business needs quickly. That is implementing new requirements, changes to existing functionality, even creating new business opportunities through innovation. A software system has to change all the time, otherwise, it is obsolete.

This property describes systems that suffer when put under stress. Imagine a software project that is not easy to change at development time. For example, if it is not easy to extend, modify and deploy to the production environment. Or a system that is not able to handle unexpected user inputs or external system failures and breaks easily. That's a fragile system that is harmed by stress and penalized by change, a good example of fragile.

This is a system that can continue functioning in the presence of internal and external challenges without adaptation. Every system is robust up to a level. For example, a bottle is robust until it reaches the level of breaking point. A software system can be made robust to handle unanticipated user input or failures in external systems. For example handling NPE in Java, using try-catch-finally statements to handle unreliable invocations, having a thread pool to handle concurrent users, creating network connections using timeouts, are all examples of robustness for a software system. But a robust system doesn't adapt to a chaining environment and when the stress and change threshold is reached it would break. The qualities that define the robustness vary from system to system. An ATM, for example, needs to be robust and not fail in the middle of a transaction, whereas, a media streaming service can drop a frame or two, as long as it continues streaming under stress.

Before looking at the next level of software evolution - the antifragile systems, let's visualize and summarize different kinds of software system characteristics. 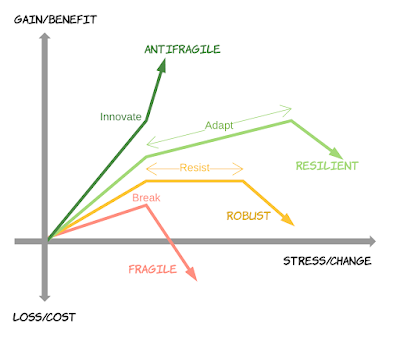 Many things in life are antifragile, such as the human body. When stressed at the right level, a muscle or bone wold come back stronger. But can a software system be antifragile? Certainly there are some tools, platforms, architectural styles, methodologies that can help create software with antifragile characteristics. Let's see some of the more popular ones:

If it takes few weeks to create a new developer environment, you can not react to change. If it takes three months to release a new feature, you can not react to change. If your ops team is watching the metrics dashboard and manually scaling applications up and down, you cannot embrace change. If the team is hardly catching up with the change, there is no way to gain from change. But once you put an appropriate organizational structure, the right tools, and culture in place, then you can start gaining from change. Then you can afford having Friday Hackathons, then you can start exploring open source projects and start contributing to them, then you can start open sourcing your internal projects and benefit from a community, and generally be the change itself. And why not the Netflix or the Amazon of tomorrow.