This week, CloudBees organized an Automotive Industry event in Böblingen, near Stuttgart, at MotorWorld, paradise for car lovers of all types and generations. The event gathered some of the leading car and OEM vendors and some great sessions on how the CloudBees Jenkins Platform is being used in this industry got presented.

The automotive industry can be used as a great proxy to explain the impact of software on established markets, and how the same will increasingly impact other markets. Essentially, as software is becoming increasingly important in how companies differentiate their products, some maverick vendors decide to extensively play the software card in order to disrupt the entrenched vendors.

In the Automotive Industry, That Maverick is Called Tesla.

Obviously, Tesla offers high-performance electric cars, but that might not be what matters the most nor what worries the industry. What’s unique about Tesla is their extensive use of software to differentiate cars.

If you look at car vendors, their main focus is on cars as a “hardware” piece. They focus on engine power, safety, fuel efficiency, durability, design, etc. The car is essentially a big piece of hardware. Within that hardware, software is used for some embedded features (bus communication, diagnosis, entertainment system, etc.), but software is not driving the fundamental concept of the car in any way. It is either an accessory to it, or so embedded it in obscure sub-systems it is not visible to anybody (think about the Anti-Lock Braking system - ABS - for example, it is software, but you don’t even think about it). In this view of the world, software is pretty much “burnt” into the car at production time. Updates are possible but unlikely, and typically only happen to fix major issues.

If you now look at Tesla, they’ve truly built a computer on wheels. Software is a key aspect of the car, in the exact same way the engine or the safety is. Through regular updates, Tesla is not only able to pushes fixes but actually adds new features to their car. Those updates do not require any visit to the shop: they just happen over-the-air, whenever you schedule it, at night for example. Park your car in version 1.0, get to work the next day with version 1.1. 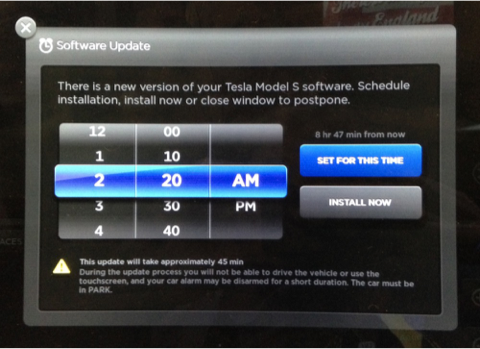 In a recent update for example, Tesla added the “auto-pilot” feature, making it possible for your cars – within well defined constraints – to self-navigate in the traffic, change lane, etc. And this is heavily disrupting the entire automotive ecosystem! 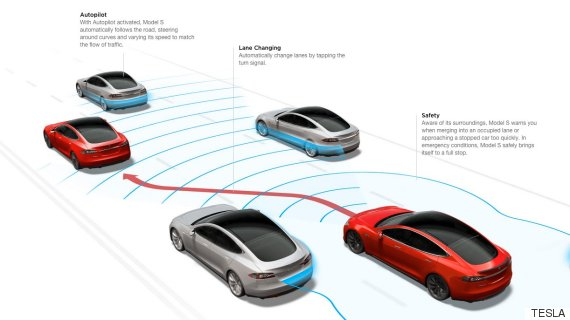 Take two buyers of new cars, a Tesla and another vendor, each buying a car in 2015 with about the same features and cost. As they leave the garage for the first time, it is expected that their car just depreciated by 10% at least. Yet, a few months after, Tesla releases the “auto-pilot” feature. Suddenly, the value of both cars differs: the Tesla is suddenly comparatively more valuable than the first one, it has more features, it is up to current market standards. It is actually one of the first time in the automotive industry that a vendor is able to increase the value of your car after you bought it. And it also opens the door to new revenue streams for Tesla (not all new features have to be free).

But in order to make that happen, Tesla has to disconnect the lifecycle of the “hardware”, from the lifecycle of the software. Software has its existence above and beyond the production time of the car. In many domains who already went through that transition, this already exists. Take your phone for example: the same hardware can sustain several versions of Android or iOS (unlike previous generation phones à la Nokia for example). The same revolution is happening to the car industry.

This field is where CloudBees is active. Our platform helps companies get better at producing software. Not once in a car lifetime, but in a continuous fashion, iteratively, this is the new way of consuming software, the new way of producing value and evaluating whether it hits the mark or not, and adapting.

Tomorrow, self-driving cars will be the norm. And in that new era, software is king. If you look at Google’s current prototypes, they have made that point even more obvious: the hardware is essentially just a host for software, they have “OEM’ed” hardware (aka cars) from another vendor, and boosted them through software to become what’s probably the most advanced cars you can find on the market today. It is very probably that by 2040, cars that are not self-driving won’t be legally allowed on public roads. Too risky, not efficient enough at driving in high-density scenarios, people driving cars will be a thing of the past. Yet, only a handful of highly sophisticated companies will have the funding and expertise to build such software. This growing predominance of software represents both a unique challenge and opportunity for the entire automotive ecosystem. To make things more complicated, the automotive industry is a complex one, organized around car vendors, OEM providers, 2nd and 3rd tiers providers, etc. the entire value chain has to be redefined.

Time will tell which vendors have been able to redefine themselves and either become the “Google”  or the “Kodak” of the car industry. It is very likely that historical vendors will vanish as part of that transition.

While such a phenomenon is currently pretty visible in the automotive industry, this shift is taking place in many others. Just think about the transformation that the banking industry is going through, the watch industry, etc.

Where does the market you are operating in fit into that picture?

P.S.: The slides of my keynotes are here.