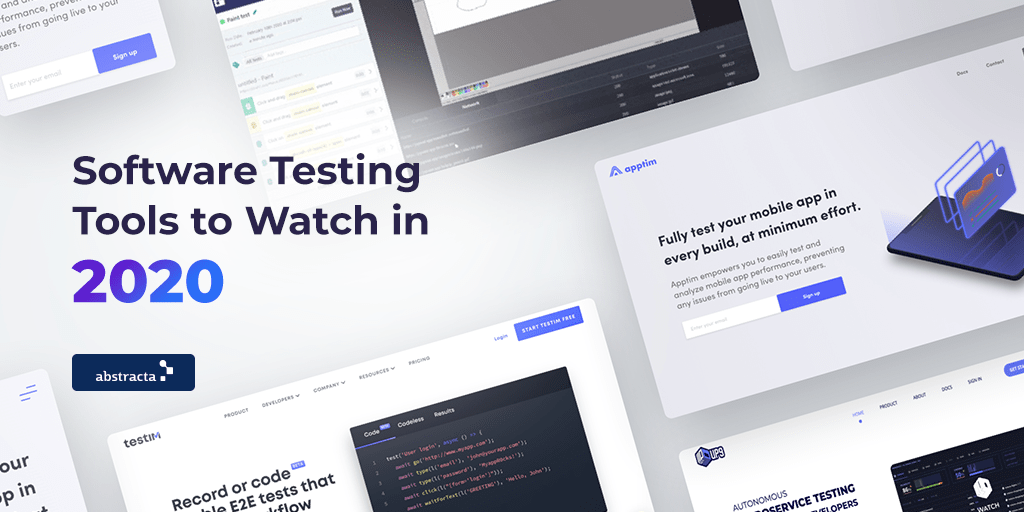 Do you like to stay in the know about the most up-and-coming software testing tools?

These days our team has been buzzing about plenty of tools we’ve come across, hosting tutorials and internal chats to share knowledge about them with one another and we figured we’d share them with you in this article!

Here are the top software testing tools that we're keeping an eye on in 2020:

A new tool created by some of our very own Abstracta team members (so, yes, naturally we’re excited about it), Apptim empowers mobile developers and testers to easily test their apps and analyze their performance to prevent any critical issues from going live. While the user can run an exploratory testing session within Apptim on Android or iOS devices, the tool automatically measures app render times, power consumption, resource usage, and captures crashes. It then compiles all of these results in an in-depth report that also offers suggestions for improvement.

While not new, BlazeMeter is a 100% JMeter-compatible, self-service web load testing cloud. Load tests are easily created and configured online. Once these tests are created, it is possible to run them either using the BlazeMeter Web UI or using the BlazeMeter REST API. The second option means that instead of manually starting the tests, users simply create an automated script that will automatically run a predefined test via the API.

Another tool built around open source JMeter, BlocklyJMX is a new web-based alternative for viewing and editing test plan files. While it’s not a mature tool, it delivers on what it aims to achieve. It isn’t a JMeter substitute, but a rather promising alternative to JMeter’s UI when creating scripts.

GXtest was developed by our three co-founders over a decade ago. Over the years, it’s gone through several iterations and today, we’ve released the fourth version alongside GeneXus with features that help to shift-left testing.

Reflect is a new code-less test automation tool that we think is a great option for manual testers who want to start automating web regression testing. Its creators needed to find a cost-effective, zero-code, zero-installation tool for recording and executing UX tests that could be easier to run and maintain. When they didn’t find what they were looking for, they built one!

It’s no secret that we typically advocate for open source tools whenever possible, but our team has quickly been taken by this new tool. Testim.io leverages machine learning for the authoring, execution, and maintenance of automated test cases. It also boasts various plugins to integrate the tests into a CI/CD Jenkins pipeline, Jira, and personalized grids for the test execution.

The tool auto-generates test code in the background based on service traffic and triggers automatic fault detection and continuous reliability analysis. It constantly runs and assesses system reliability and offers rich reports.

This brand new tool has promising potential because of the outstanding engineers behind it like Alon Girmonsky (who previously founded BlazeMeter) and Andrey Pokhilko (who was previously at BlazeMeter and a huge open-source contributor to JMeter and the Taurus projects).

Still, in closed beta, we are learning more about what projects we can use the tool for and which features we like the most… So stay tuned for a further review!

That’s just a shortlist of software testing tools that are either new to the market or are releasing new, exciting capabilities in 2020.

What do you think? What other tools would you add to this list? Please, let us know in the comments!

Published at DZone with permission of Kalei White. See the original article here.