i've been asked to post the slides for the javafx presentation that i delivered at javazone 2008.  because the presentation itself was written in javafx, i've bundled it up so that you can run it from a java web start link.  first, however, i'd like to show you some screenshots and provide an explanation of what you'll be looking at: 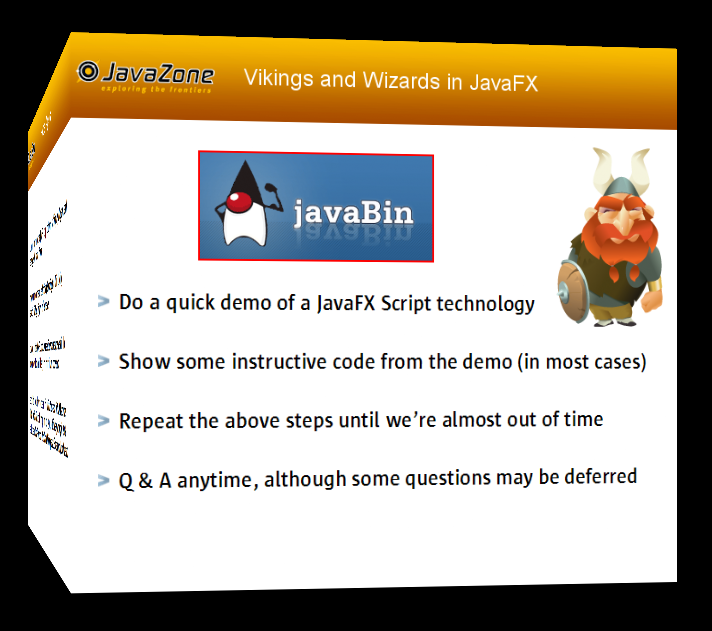 as shown above, the presentation (entitled vikings and wizards in javafx ) is shown on the faces of a rotating cube.  the norwegian java users group, named javabin, does a great job in organizing the javazone conference, which also explains the graphics on the first "slide".

to view the next or previous slide, you can click the image buttons that have a right or left pointing triangle, respectively.  this will rotate the cube, which is accomplished using the perspectivetransform effect, located in the javafx.scene.effect package . 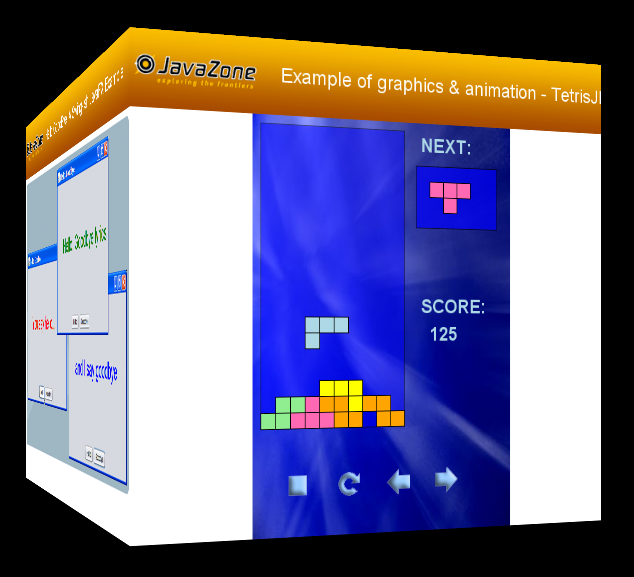 some of the slides are "live" (running javafx functionality within them).  for example, you can interact with the tetrixjfx game, the "are you a viking" wizard, the custom node examples (menunode and decknode), and the morphing example.  for the latter, just click on the yellow circle and watch the morphing begin!  to see more information about these applications, visit the blog posts for tetrisjfx , vikings and wizards , rolling your own custom nodes , and getting decked 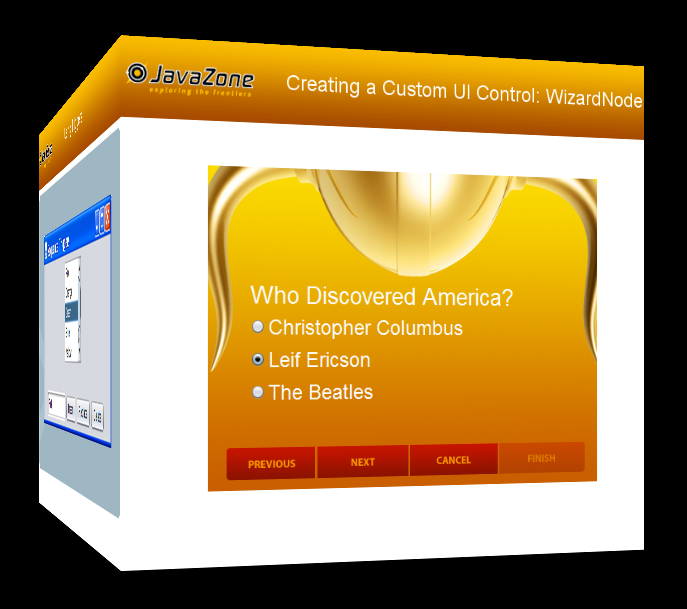 by the way, the presentation runs in an undecorated frame , which means that there is no border, close box, etc.  i make my desktop background black and minimize any open windows before presenting so that the cube appears to be rotating in a big dark space.  as soon as the graphics designer (mark dingman of malden labs) gets a chance to create a cool looking graphical close box, i'll put it in the application.  for now, however, you'll have to end the application manually.  you'll need jre 6 to run this, and java se 6 update 10 will give you a faster deployment experience.  go ahead and give it a whirl by clicking the java web start button below!

note: please keep in mind that this is running with the javafx preview sdk which has not been optimized for performance.  behavior and performance of the perspectivetransform on vista, for example, are definitely sub-optimal at the moment.  these are known issues that the javafx gui team is confident have already been corrected in the upcoming javafx sdk 1.0 release.