For location-based search, it is very common to search for objects based on their spatial location. e.g. find all restaurants within 5 miles of my current location, or find all schools within the zipcode of 95110 ... etc.

A query can be represented as another rectangle. The query is about locating the spatial objects whose MBR overlaps with the query rectangle. 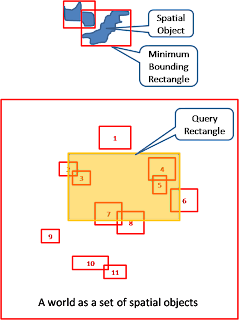 RTree is a spatial indexing technique such that given a query rectangle, we can quickly locate the spatial object results.

The concept is similar to BTree. We group spatial objects that are close by each other and form a tree whose intermediate nodes contains "close-by" objects. Since the MBR of the parent node contains all MBR of its children, the Objects are close by if their parent's MBR is minimized. 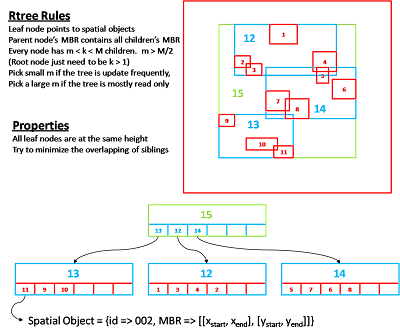 Start from the root, we examine each children's MRB to see if it overlaps with the query MBR. We skip the whole subtree if there is no overlapping, otherwise, we recurse the search by drilling into each child.

Notice that unlike other tree algorithm where only traverse down one path. Our search here needs to traverse down multiple path if the overlaps happen. Therefore, we need to structure the tree to minimize the overlapping as high in the tree as possible. This means we want to minimize the sum of MBR areas along each path (from the root to the leaf) as much as possible.

If the split goes all the way to the root, the original root will then be split and a new root is created.

Notice that the content with these delete node is not all garbage, since they still have some children that are valid nodes (but were removed from the tree). Now we need to reinsert all these valid nodes back in the tree.

Finally, we check if the root node contains only one child, we throw away the original root and use its own child to become the new root.

Update happens when an existing spatial node changes its dimension. One way is to just change the spatial node's MBR but not change the RTree. A better way (but more expensive) is to delete the node, modify it MBR and then insert it back to the RTree.