NetBeans uses its projects' settings for javac.source (and javac.target) in more ways than simply enforcing javac's use of the -source and -target. In this post, I look at some of the numerous benefits of appropriately setting the Java release source level in NetBeans.

In a standard ("Java Application") NetBeans project, the JDK version is for the project is specified in the Project -> Properties -> Sources window. This is shown in the next screen snapshot with a really old version (1.2) of the SDK displayed. 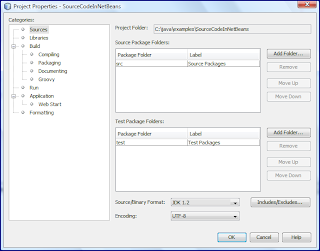 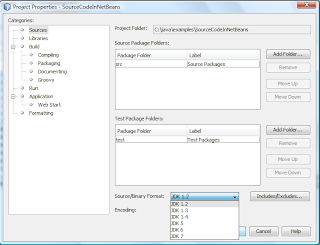 Some benefits of setting the source level appropriately in NetBeans are obvious. For example, if the source JDK release is not set to at least 1.5 (or 5), then standard language constructs such as annotations, enums, and generics are shown are compilation errors in NetBeans. An example of this is shown in the next screen snapshot, which depicts the NetBeans error message when an enum is specified in a NetBeans project in which the JDK release is specified as 1.4.

The last example showed how using an "older" release can lead to errors regarding language features that did not exist for that release. An opposite benefit of this can be achieved by moving NetBeans's project's release to the new SDK release when appropriate because it can help developers identify ways in which they can improve their code base with the new version. I specifically discussed this approach using NetBeans 7 to "modernize" Java code bases to newer releases of Java in the blog post Seven NetBeans Hints for Modernizing Java Code. In that post, I demonstrated how NetBeans 7 (and even some older versions of NetBeans) can help flag areas of code where J2SE 5 and Java SE 7 new features apply and are not being used.

It's easy to think that there is no use in setting the source release in NetBeans to 1.6 (6) because Java SE 6 did not introduce any new language features. However, it turns out that there still are some differences and it's probably best to have 1.6 specified if that's the JDK the software is being written against. In the blog post Differences between source level 1.5 and 1.6 in NetBeans, Antonio Santiago wrote in early 2008 that NetBeans made use of Java SE 6's new Swing-related classes when JDK 1.6 was set as the release. This is preferable to using third-party libraries.

Section 9.6.3.4 of the Java SE 7 Java Language Specification states, "This behavior differs from that in Java SE 5.0, where @Override caused a compile-time error if applied to a method that implemented a method from a superinterface that was not also present in a superclass." More details regarding @Override in J2SE 5 versus Java SE 6 are available here.

Returning from the side note on @Override, one of my favorite additions to Java SE 7 is not even a language feature. The new Objects class is especially handy for writing more standard and safer implementations of the "common" methods equals(Object) and hashCode(). If a developer has his or her NetBeans project configured to use JDK 1.7 as the release, NetBeans takes advantage of the Objects class to implement these methods.

I have looked at some of the benefits NetBeans provides for recent versions of the JDK (1.5, 1.6, and 1.7), but I am sure there are more that I'm not aware of. The point of all this is that it is best to ensure that a particular project is configured to be using the correct source version even if it is believed that the version difference does not matter. It may not matter outside of NetBeans (such as to javac) in some cases, but it likely does matter to NetBeans.