Organizations who want to take advantage of the many benefits of NoSQL databases, often find that they have two challenges:

Some also find the confusion with the NoSQL name. The abbreviation stands for 'Not only SQL', but it can also be misinterpreted it as 'No to SQL', thus accepting that in order to use NoSQL database, organizations will not only have to convert their relational data model into the document model, but also get training on whichever APIs for the NoSQL database that they will select.

In reality, the NoSQL database industry has never abandoned the most popular data access for databases. Many NoSQL vendors are still using a variation of SQL. Cosmos DB, Cassandra CQL, Elasticsearch SQL, Cockroach Labs. Even with MongoDB query language, you will find that it is based on the select-join-project construct, which is the foundation of relational algebra that is used in SQL.

One database company in this NoSQL space, that has addressed this issue full-on, is Couchbase with its N1QL query language. While Couchbase stores the data in the native JSON format, the data model that it supports can either be relational or hierarchical structure, which is often used in the document-based model for its schema flexibility and extensibility. This is possible because Couchbase provides a SQL like query language - N1QL, which extends the SQL language to allow users to manipulate the hierarchical nature of the document model. All this is built on top of Couchbase high-performance Data Service with its key-value APIs.

But in today's NoSQL database market, the options are numerous, and as the results can pose many challenges for organizations who are looking to ensure that their database technology investments can take advantage of all the many benefits that are currently available with NoSQL technology.

To help customers with the decision, Altoros — a company that focuses on helping companies to shift from their legacy IT system to the future, have published a Query Comparison Report to compare the query language in today’s most popular databases. It has selected to focus on MySQL/SQL, Couchbase N1QL, and MongoDB query languages. Each query language was assessed for their implementations to meet the different query scenarios using the following criteria.

All the examples of queries and database dumps, which can help to deploy and run all the scenarios from this report can be found in this GitHub repository.

The goal of the report is to compare the query languages from the perspective of the traditional RDBMS applications. For that it has selected:

An Activity Management application model, that is often found in the most of the CRM systems that manage Sales, Services and Marketing activities. The report setup includes both a relational model for MySQL and the document database model for Couchbase and MongoDB.

It also uses a set of query scenarios that most users of these systems would recognize.

For each scenario, the report provides the corresponding solutions written in SQL, N1QL and MongoDB query language, then provides the assessment for each solution.

Using MySQL-SQL as the reference point, the report assesses Couchbase N1QL and MongoDB Query Language based on a number of criteria.

The Number of Lines of Code 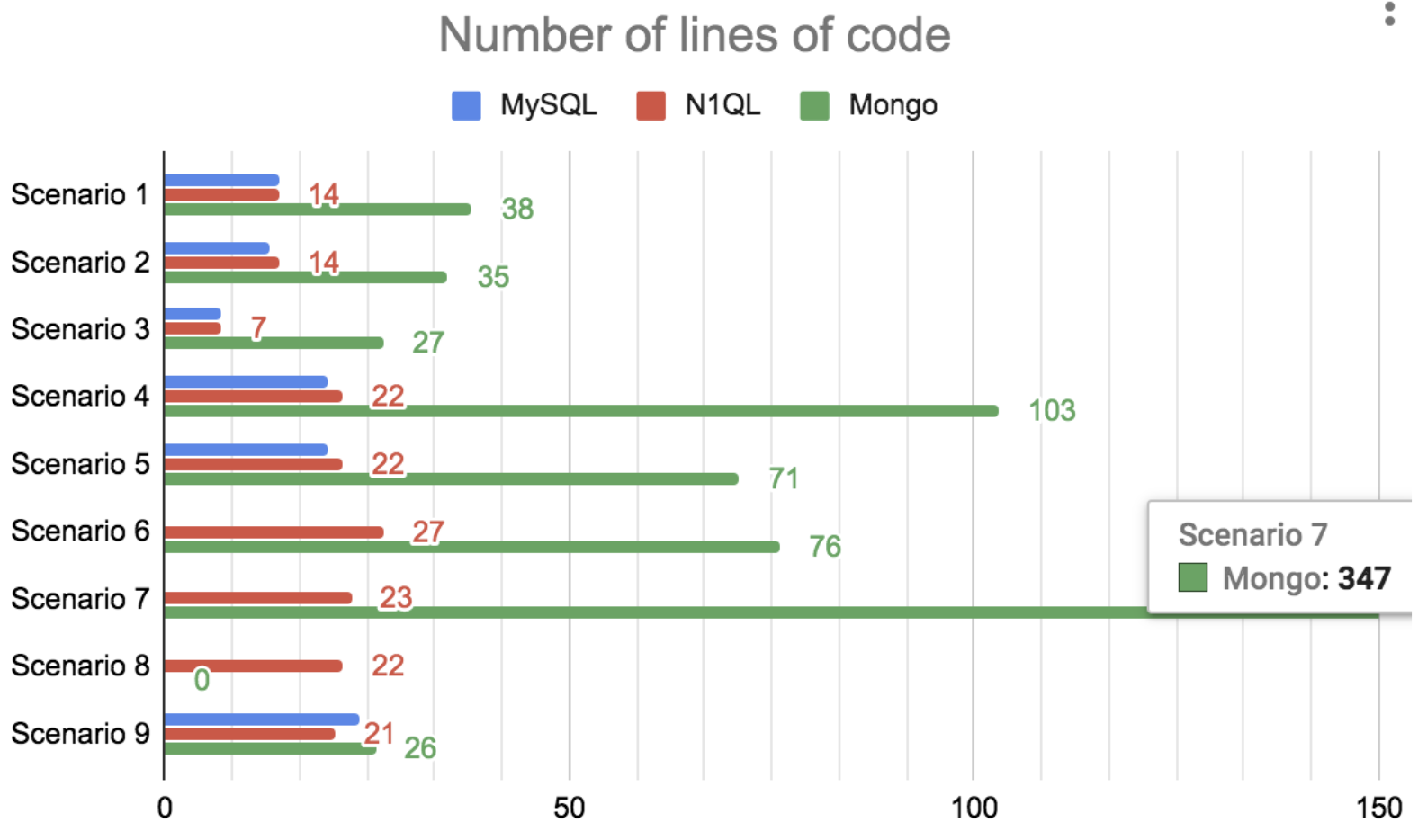 The chart shows the number of lines of code for each query. While this metric can be subjected to misrepresentation as all query languages have their own recommended formatting, it can provide a simple guide as to the complexity involved. 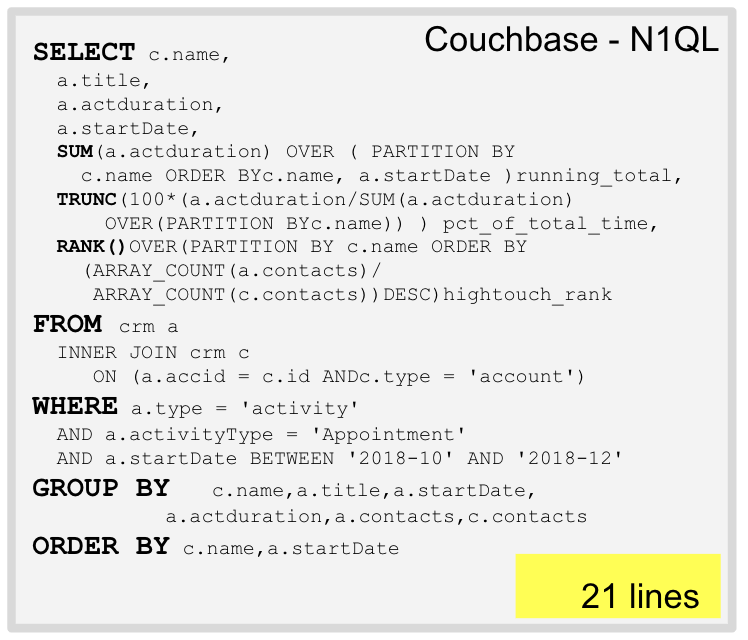 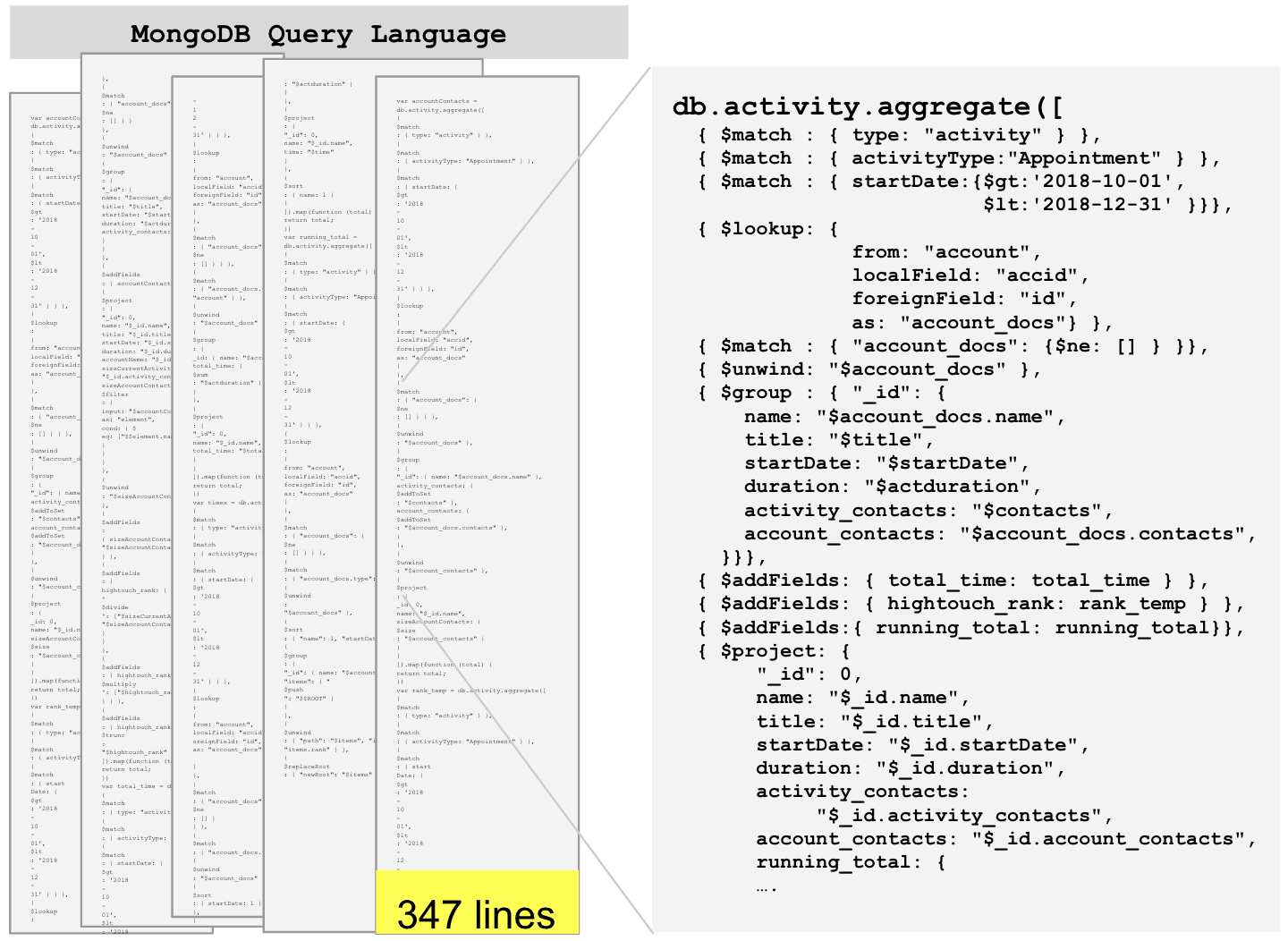 Please note that this is the MongoDB query solution provided by the Altoros team. As with any implementation, there could be other ways to write the Mongo code, but this is what the team had come up with.

The Number of Client Server Trips 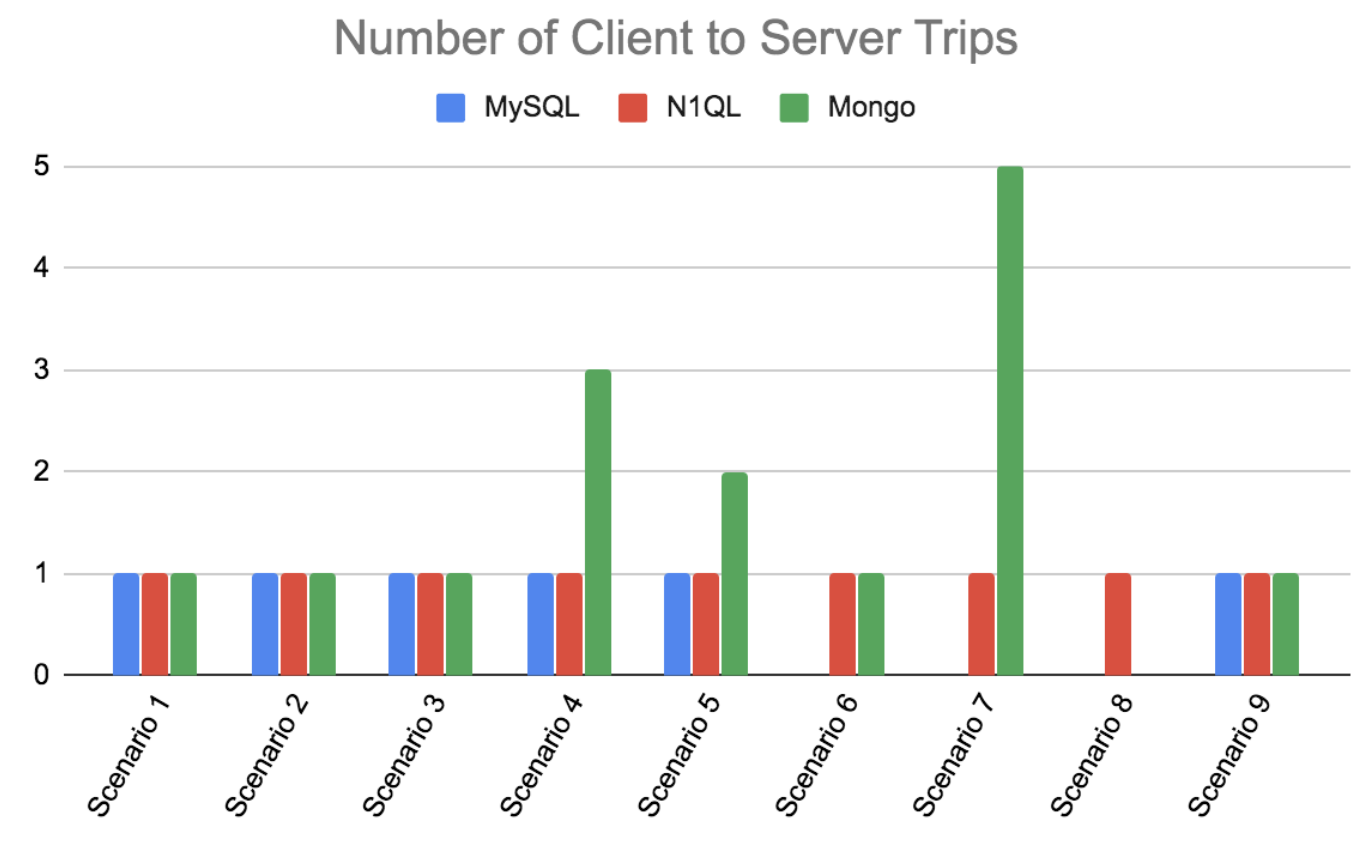 The chart shows the number of trips that the application has to submit to the database server. 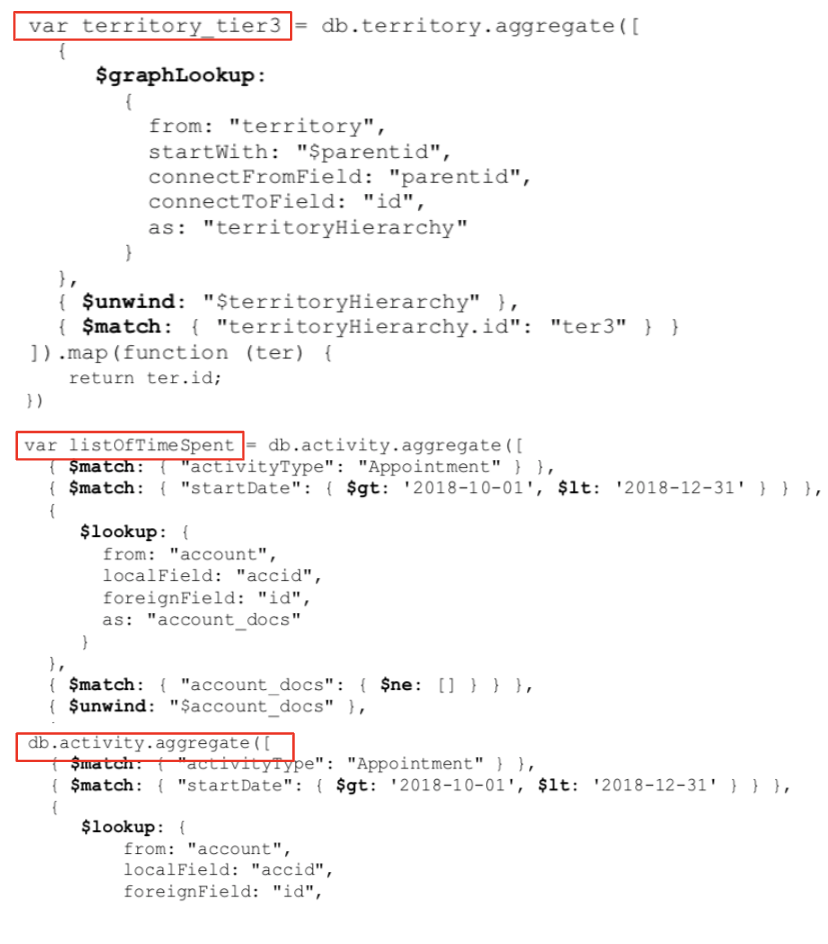 3. Index Advisor as a Service for N1QL — https://index-advisor.couchbase.com/indexadvisor