Learn how to squash bugs!

To err is human; to introduce bugs is to be a developer, and to debug is part of everyday life. Debugging is not just about the fix — sometimes it's the drudgery of trying to locate the root cause that kills passion, especially when you have thousands or even millions of lines of code. A former Oracle database developer, who helped maintain Oracle v12.2 and its 25 million lines of C code, described his struggling life with bugs this way:

He was frustrated with the situation, and this is something we want to avoid in our projects!

You may also like: Six Most Popular Bug Tracking Tools

Modern computer programs are so large and complex that designing a way to easily locate bugs would greatly improve a developer's quality of life. Why should you not build a bot to automatically find program bugs? At our recent TiDB Hackathon 2019, my teammates and I successfully brought this idea to reality, and our project won third prize! 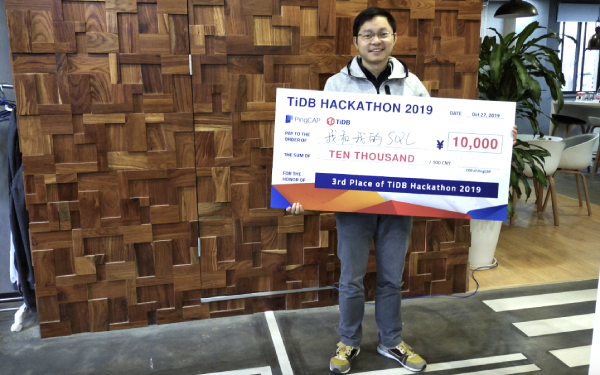 "Check" out that big check!

The Bug Tracking Bot We Built

At the Hackathon, we built a bot that helps us quickly locate several bugs in TiDB's source code. (BTW, for those who don't know TiDB — it's an open-source distributed SQL database written in Go.) Below, you can see how our bot highlights potentially faulty areas in the code. The higher the failure rate, the darker the color; the higher the failure count, the brighter the block.

This bot was built based on the following techniques:

The rest of this post describes in detail how we used the above techniques to build our bot. By the end of the article, you'll know the bot's three most important components, and hopefully, find inspiration for your cool ideas.

We also provide a simple demo on fuzz_debug_platform - TiSqlDebug. Run the four commands and see the heatmaps yourself! Feel encouraged to jump on board and help us at any time!

How We Built the Bot?

This project was initially inspired by APOLLO: Automatic Detection and Diagnosis of Performance Regressions in Database Systems, a VLDB paper written by researchers from Georgia Institute of Technology (GT) and eBay Inc. We appreciate their great work. The paper presents a design of the Apollo toolchain which detects, reports, and diagnoses performance regressions in database management systems (DBMSs).

This approach can be also applied to finding bugs, so let's understand some of Apollo's basics first.

In the end, the Apollo system produces a bug report that includes:

In the real world, analyzing execution traces is very complicated. You have to consider the impact of concurrencies, loops, recursions, and so on. Plus, we only had two days to present our Hackathon project. We needed a simpler way to display our results.

So we found another paper, Visualization of Test Information to Assist Fault Localization. This paper presents a technique that uses varying colors and brightness to visually map the participation of each code block in the passed and failed test cases.

What's even cooler is that you can apply both automated debugging and visualization techniques to do a lot of other things. I'll share some thoughts in a later section. Before that, let's see how we hacked our way to build this bug-hunting bot.

Here are our answers.

Question #1: How Do We Generate a Lot of Test Cases?

To do an accurate and effective statistical diagnosis, we need to feed the bot a fair amount of test cases. Thus, we need a SQL fuzzing tool that randomly constructs valid SQL queries for testing the TiDB database.

Projects such as RAGS and SQLSmith provide a popular SQL fuzzing framework in the DBMS community. For our scenario, we used an open-source stochastic testing framework, go-randgen, to implement SQL fuzzing.

Users first define a grammar file that contains some Backus–Naur form (BNF) grammars for SQL. go-randgen then starts from the “query” statement and randomly traverses the “SQL grammar tree” in the file to generate an SQL query. This process is shown below as a red line path.

Also, as shown below, we implemented a SQL fuzzing demonstration page that shows which SQL BNF grammar is most likely to generate a failed SQL query. Each BNF grammar is assigned a color value based on the ratio of the passed and failed test cases (SQL queries) that the grammar appears in.

Question #2: How Do We Track the Execution of Each SQL Query?

Apollo uses the dynamic instrumentation tool DynamoRIO to track the execution of each SQL query. But we were not sure whether this tool worked for a Golang database and how long it would take, so we had this workaround idea — why not directly instrument the source code before compiling it?

By referring to the implementation of a Golang tool cover, we wrote a tidb-wrapper to instrument TiDB's source code and generate a wrapped version of it. We then injected an HTTP server into the program.

Injecting an HTTP server is useful when you work with SQL query summaries. A query summary is the hex representation of the 32-bit MurmurHash result of the query and is used to simplify data transfer.

For example, if a SQL query's summary is “df6bfbff”, we can then browse “HTTP://<tidb-server-ip>:43222/trace/df6bfbff”. The HTTP server will print the query's execution traces (including the files and the lines of code) in the JSON format.

In the returned JSON list, each array of the “line” field stores the line numbers at which a basic block starts and ends. A basic block is a code block that cannot be split into smaller branches. It is the smallest “unit” for our statistics.

But how can we identify all the basic blocks in a Golang source file? We found a similar implementation in the Golang source code, and borrowed it and created a library called go-blockscanner.

Our project focused on diagnosing correctness bugs in TiDB, so we configured the bot in a single-thread mode that sends the SQL query to TiDB one at a time. Thus, we can safely consider all the basic blocks executed from the time the server/conn.go:handleQuery method is called to the time the HTTP server is accessed as the execution traces of a SQL query.

Once the bot gets the traces from the HTTP server, it offloads the server by removing all the trace information from it.

Question #3: How Do We Visually Display the Potentially Faulty Basic Blocks?

Now we have all the basic blocks that each test case (SQL query) executes. Next, let's build a visualization model that illustrates the chance that each basic block leads to a failed test case.

We implemented the following metrics for the visualization model: 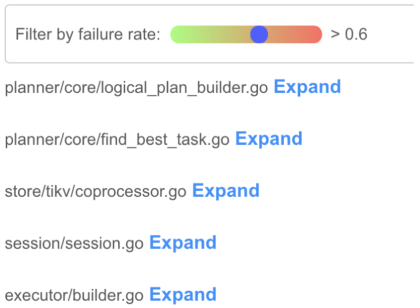 Our limited time in the Hackathon only allowed us to present a prototype for this dream: When we finish the hard work of the day, we don't have to wake up in the middle of the night to find bugs and correct code. We just send a bot to hunt for bugs before going to bed. When we get up in the morning, the bot automatically reports to us where the program's fault is most likely to occur.

But we still have a long way to go. Our bot has the following limitations that require further work:

Let us know if you find more issues and limitations!

As mentioned earlier, the techniques that our bot uses can do more than just find bugs in DBMSs. You can apply them to build or improve a lot of other things. Here are some of our thoughts:

Potential applications also include test coverage count and performance issue diagnosis. There are tons of cool stuff that you can do. Let's team up together at fuzz_debug_platform and set our imaginations free!

Why Are Bugs So Common in Software Engineering?

How to Organize a Bug Hunt

Published at DZone with permission of Du QinYuan. See the original article here.