Coding native APIs is all the rage, but have you ever taken a step back and asked, “How does this compare to standards-based connectivity?” You should.

With the exponential growth of new data sources, coding to native APIs is all the rage. For example, you may want to learn to code to the Salesforce APIs so that you can access your customer data with an off-the-shelf analytics application. Or, you may have realized that Big Data and NoSQL are skyrocketing and want to explore the native Cassandra query language, CQL.

Whatever the case, we think you are severely limiting your scope and your choices when you choose native coding over standards-based connectivity. Here’s why: 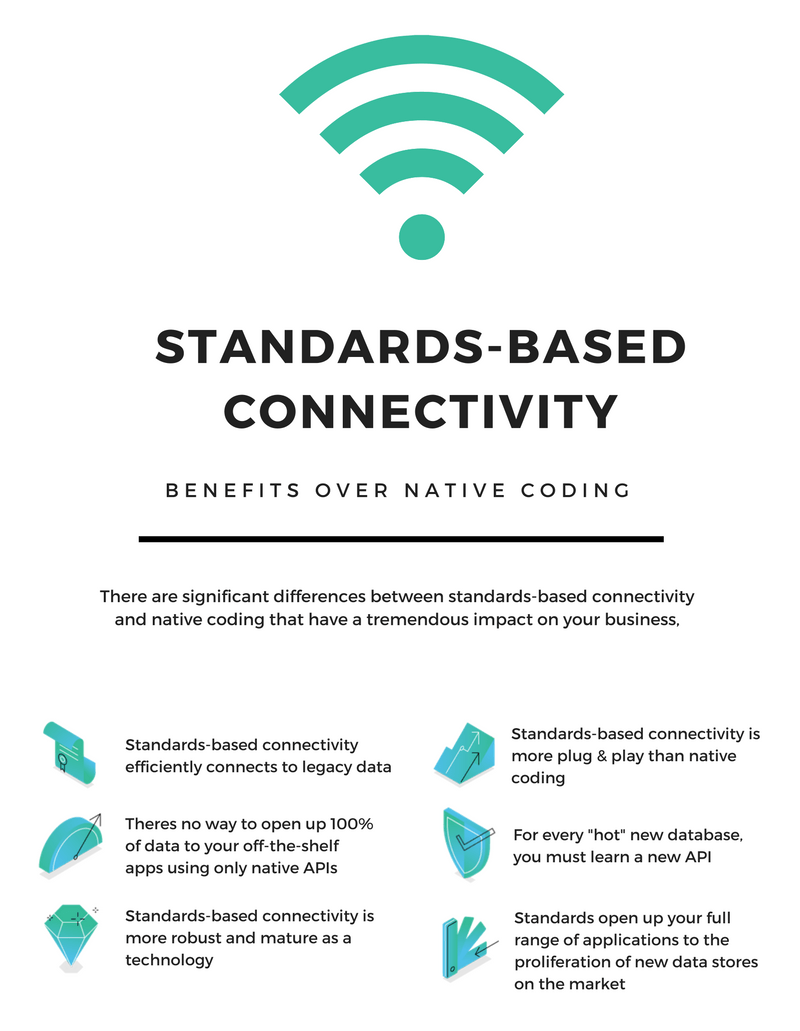 Why Do You Need Standards?

In the Big Data ecosystem, there are two distinct, yet highly intertwined, entities: databases and applications. Applications are written in specific programming languages, and the top three most popular languages in 2016 are C, Java, and Python. Databases, on the other hand, are queried via languages like SQL. Why is this important? Application and databases do not magically communicate with each other without help. A middle interface is needed to translate these languages between the application and the database in order to avoid learning and incorporating database languages inside their applications.

ODBC and JDBC were created for this exact purpose. Open Database Connectivity (ODBC), developed by the SQL Access Group in 1992, acts as a language/platform-independent translator between an application and a database. Long story short, ODBC enables your application to query and return information from any relational or non-relational database using ODBC syntax. This frees your application from needing a database-specific language. Another huge benefit is that when you want to support a new data source with your application, you just need to install its ODBC driver (which we do for you very quickly).

JDBC (founded by Sun Microsystems), similar to ODBC, enables communication between the application and database as well, but in this case, using Java based frameworks or code to talk to databases. JDBC provides the connection between Java and databases like Oracle, Sybase, and DB2. If you need to access an ODBC-compliant database using JDBC, you can do this through the use of the JDBC-to-ODBC bridge.

OData, introduced by Microsoft, is a standardized REST interface that is quickly gaining ground for its open source approach as well as its exceptional scalability. OData is referred to as “SQL for the Web” due to its ability to query across the internet. As mentioned by Mike Johnson in his post, “What Is OData and Why You Need It,” when you think about OData, you should think REST/JSON because it’s basically a standardized REST interface. This means that whenever you are able to get to a RESTful interface, you can use the OData standard. So whether you’re programming on Windows Mobile, iOS, Android or trying to use a cloud-based application such as Salesforce Connect to enrich your Salesforce data, OData can be there to help you out.