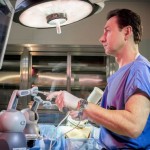 At the back end of last year I wrote about a new robotic surgeon that had been developed by a team from the John A. Paulson School of Engineering and Applied Science and the Wyss Institute for Biologically Inspired Engineering.

The team were trying to develop tactile robots that could adequately perform the kind of fiddly work so often required in surgery.

“Current conventional fabrication techniques limit the complexity and the sophistication of these millimeter-sized sensors while significantly driving up the cost of assembly and implementation,” the team said. “This poses a barrier to widespread adoption of force-sensing soft robotic surgical tools that can perform minimally invasive and complex surgeries in an inherently safe way.”

This is undoubtedly cool, but a Californian company is attempting to take robotic surgery one step further.

The company, called Virtual Incision, is attempting to turn this into reality.  They have trialled what is believed to be the first miniature robotic device for surgery to help remove cancerous growths in a patient in Paraguay.

The device is incredible because rather than operating on the patient from the outside, the robots are actually doing their work from inside the patient.  They are fed into the body via a small cut in the abdomen and then tackles its work using many of the tools doctors are already familiar with.

“To the best of our knowledge, this is the first time an active miniaturized robot has performed complex surgical tasks with the robot inside a living human, which is a significant milestone in robotics and in surgery,” the company say.

With the first surgeries successfully completed, the company now begin the long process of gaining regulatory approval, after which they hope to start selling them commercially.

I’ve written about similar miniaturized techniques for improving fertilization, but this is arguably even more impressive again.  Check out the video below for more information on the process: