Time after time I keep running to this same issue: hardware companies don't get Android. Companies building expensive products are either completely failing in their mobile app strategy across the board or put all their efforts to their iOS app effectively making their Android apps an afterthought.

But what does it matter as long as it works (on some level)?
Trust. It's all about trust.

I simply don't trust companies who don't seem to care about Android users. I've been burned too many times before. And I don't think I'm the only one.

Because of past bad experiences my shopping decision now includes looking up the Android app of the product I'm considering purchasing and seeing if it looks like an Android app and if it seems to be built the right way (scalable, uses notifications correctly, etc basic Android platform knowledge).

If I see things like use of the menu-button-of-shame, strange notification use, use of iOS UI components or UI structure etc. I know that the company is not regarding Android as a first class citizen in their own ecosystem.

When the platform I'm using is clearly at the end of the priority queue of the company whose products I'm considering buying it tells me few things based on my past experience. The UX of the mobile app is likely to be subpar. I'm likely going to get a feature limited version of the software and all new and improved features are going to arrive to me much later than if I was using iOS. Still... I'm paying the same price for the hardware product.

I simply do not trust that the device is worth the money if the company doesn't think that it's worth their time to look into the most used mobile platform of the world.

Some companies building high-end (or at least expensive) products like BOSE seem to be completely failing to understand the importance of creating mobile user experiences. With theirSoundTouch Controller (iOS) product they seem to have gone the route of ignoring all platforms and build an app with some cross-platform tool and the results are as expected.

There's no way I'll put my money into your product if you don't understand how to build mobile apps. It might be that use of the mobile app is just a secondary way of controlling the system and "an additional feature" but if this is the quality of your product I doubt I'll enjoy the rest of it either! 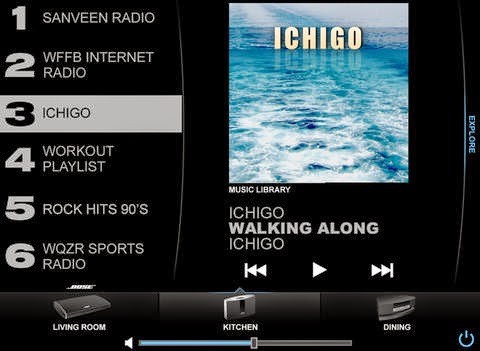 Now, this might be justified on some level but there's limits. Making hardware that talks to mobile devices is difficult. Bluetooth as a technology sucks big time but that's unfortunately what we have to use (at least for now). It probably makes sense for companies to pick the largest segment of their market to target first when building software to their hardware which is relatively standards and least fragmented.

After the start I'd expect to see the Android support added relatively quickly. It's a massive market. Let's say that you decide to target just couple of the top-end Android phones in the first iteration you will likely target a very similarly sized audience. While you might encounter some issue with some devices you can start ironing out the issues one-by-one.

But seeing something like this in an online store of bleeding edge hardware maker a year after the device release causes problems. As customer shopping in the Runtastic store this makes me pause. I will think twice buying any of the hardware that is compatible with Android as I'm not sure where my platform fits in their corporate strategy?

In case of Runtastic this becomes even worse. With Runtastic I'm not only buying their hardware to use. I'm also buying into their ecosystem. I'll be uploading my info to their systems, using their exercise apps and so on. If I subscribe to their ecosystem will I be treated on the same level as people using iOS devices?

Then there's something that I don't understand at all. This shouldnever be done by anyone. A company that takes time to make their hardware compatible with Android but for some unfathomable reason decides to port their iOS app directly to Android without looking into Android platform guidelines, UX etc. I cannot understand how this still happens in 2014.

Building Android apps right way is much easier than trying to make your apps look and function like iOS apps. Still. Some companies insisting doing this in the way we in Finland call "climbing a tree ass first" ("perse edellä puuhun).

Parrot's Flower Power is an interesting product that monitors how your flowers are doing. But what they've done with their Android app is beyond belief. It is a 1-to-1 direct port of their iOS app. From the minute you open the app on your Android device you feel like it is not built for you. 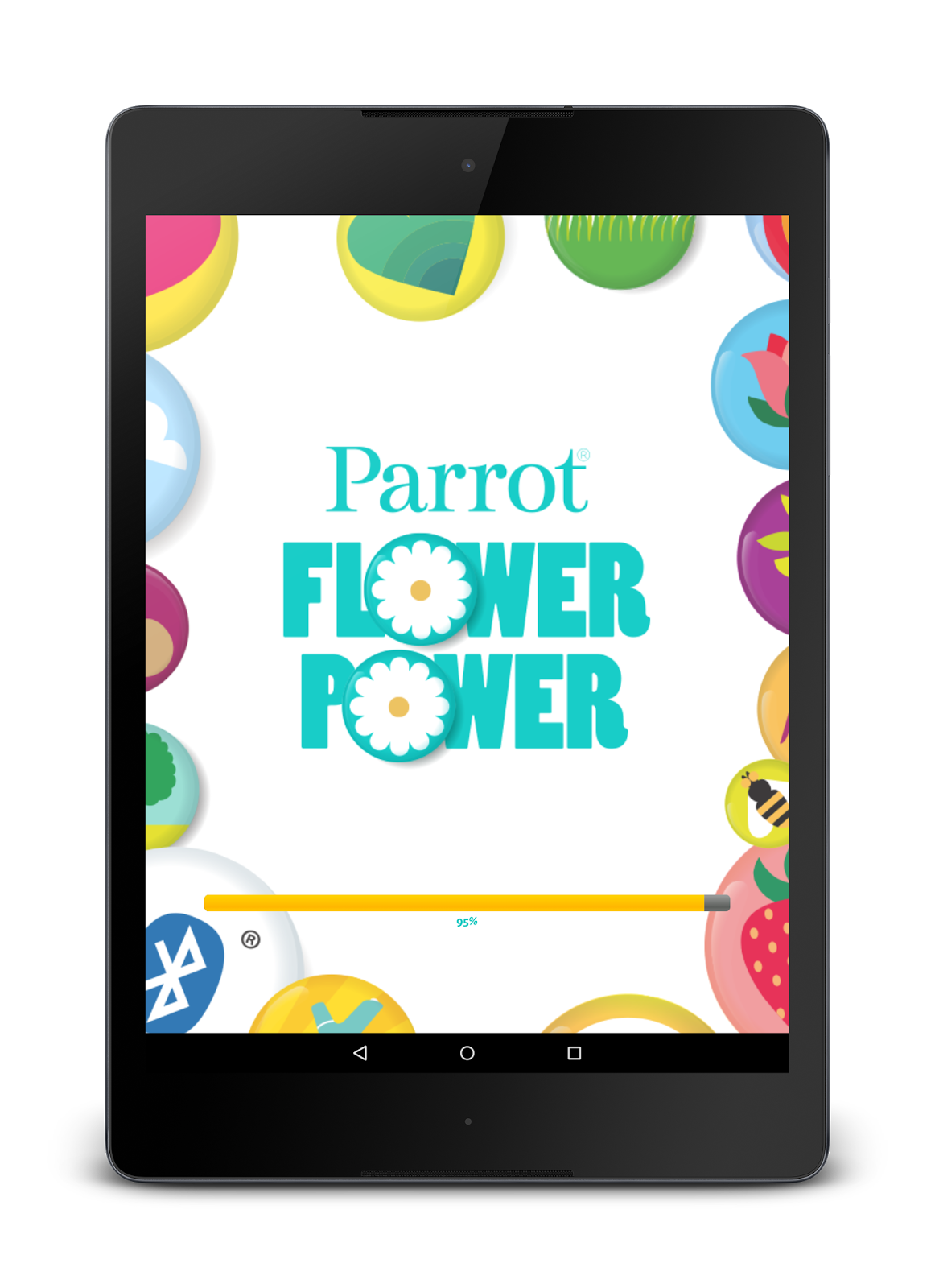 The app uses iOS bottom tabs which immediately make the app navigation not functional when combined with the Android back button. It's also style-wise mostly just confusing to all Android users. Tabs in screens don't work as expected (where's my swipe gesture), the whole font throughout the app is strange, it's full of custom controls that don't belong to the platform and they've even implemented features that you really don't need to implement on Android as the platform gives them to you for free. And top of everything the app is, of course, locked into one orientation (a sure tell that the design is not flexible).

I simply cannot understand what made them to do this? Are there no Android users in the company management? Is there no designers using Android at all in the company? This app is very confusing, ugly and doesn't belong on Android. There's no way I will buy hardware that is supported this poorly on my platform.

Another thing with hardware manufacturers that I fail to understand is the lack of Android presence on their websites. Maybe the most striking example of this is Parrot Zik 2.0 website. Take a look at the site. Would you imagine that you could use the headphones with Android as well? On the surface no. Every single image on the site is an iPhone running their software. There's even sentences like "They are made for iPhone, iPod, iPad.".

These things are not cheap. The Zik 2.0 costs almost $400 in Amazon.com by the time of writing this.

Scanning the Parrot website for compatibility there's, in fact, exactly one mention of "Android" and it is this: "Free app compatible with smartphones running on iOS, Android".

Anyone wanna take a guess how good their Android app is?

This $400 headset comes with a companion app that looks like absolute crap. It's, of course, exact clone of the iOS app but in this case it's bad on both platforms.

The app is locked on in portrait on phones and to landscape on tablets. It also fails in some very basic UI design things like using margins and alignment. It also has reinvented all the controls.

The best of all it has a menu-button-of-shame. This is such a direct proof that this app was built without any knowledge of the Android platform. 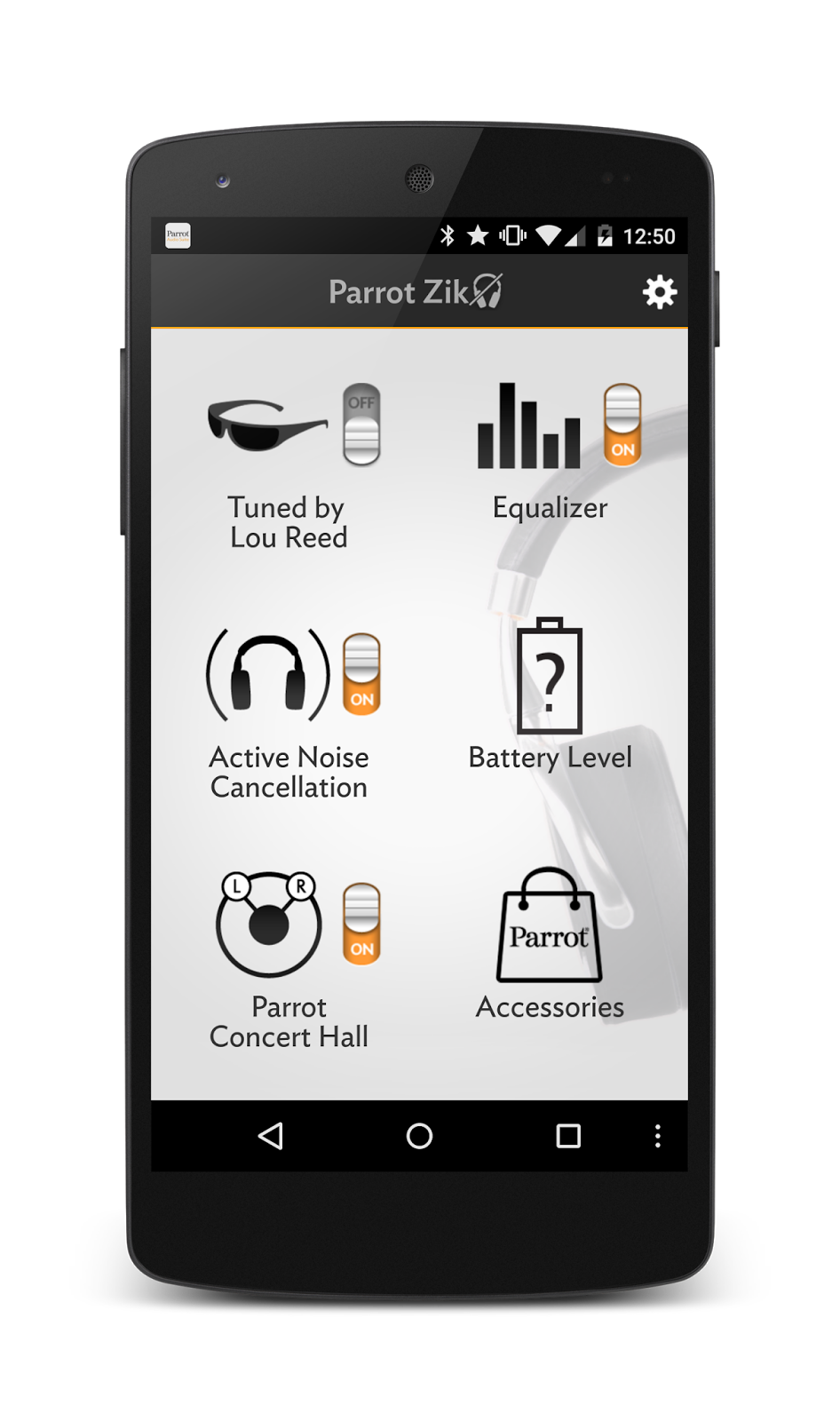 The app also immediately adds a persistent notification to your status bar when you open it. The notification content simply baffles me. And maybe not a big surprise that the notification's priority is set incorrectly so it's always fully visible. 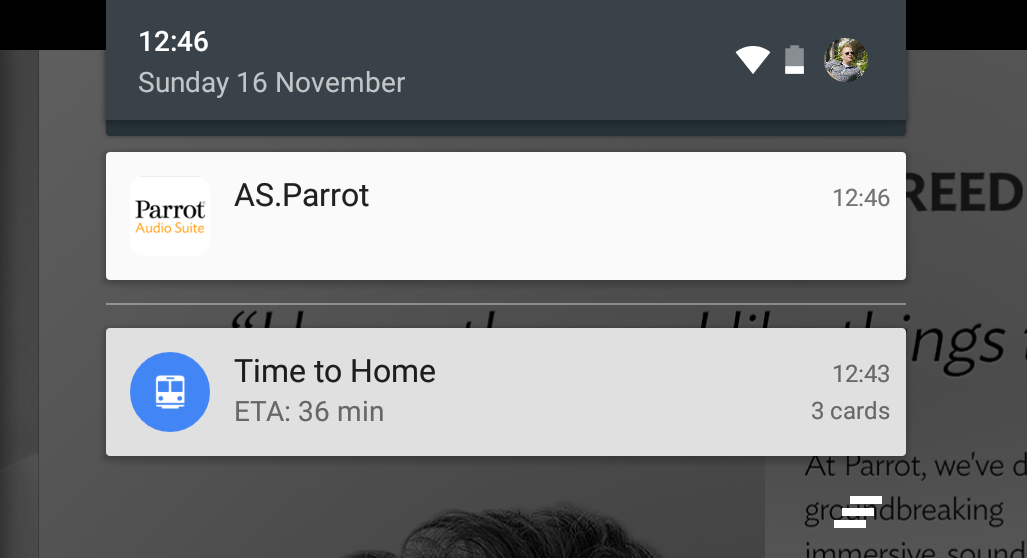 There's a lot more I could point out in the app as issues but I think I've made my point. Do I want to pay $400 for headphones if this is the quality I can expect? Hell no!

Kickstarter and indiegogo are both full of tech projects looking for funding. More often than not you see these small startups fighting for funding completely fail to understand that platform differences matter. You see pitches in Kickstarter that claim support for iOS and Android but they only show iOS devices in their campaign page (or even worse, some strange abominations like below). 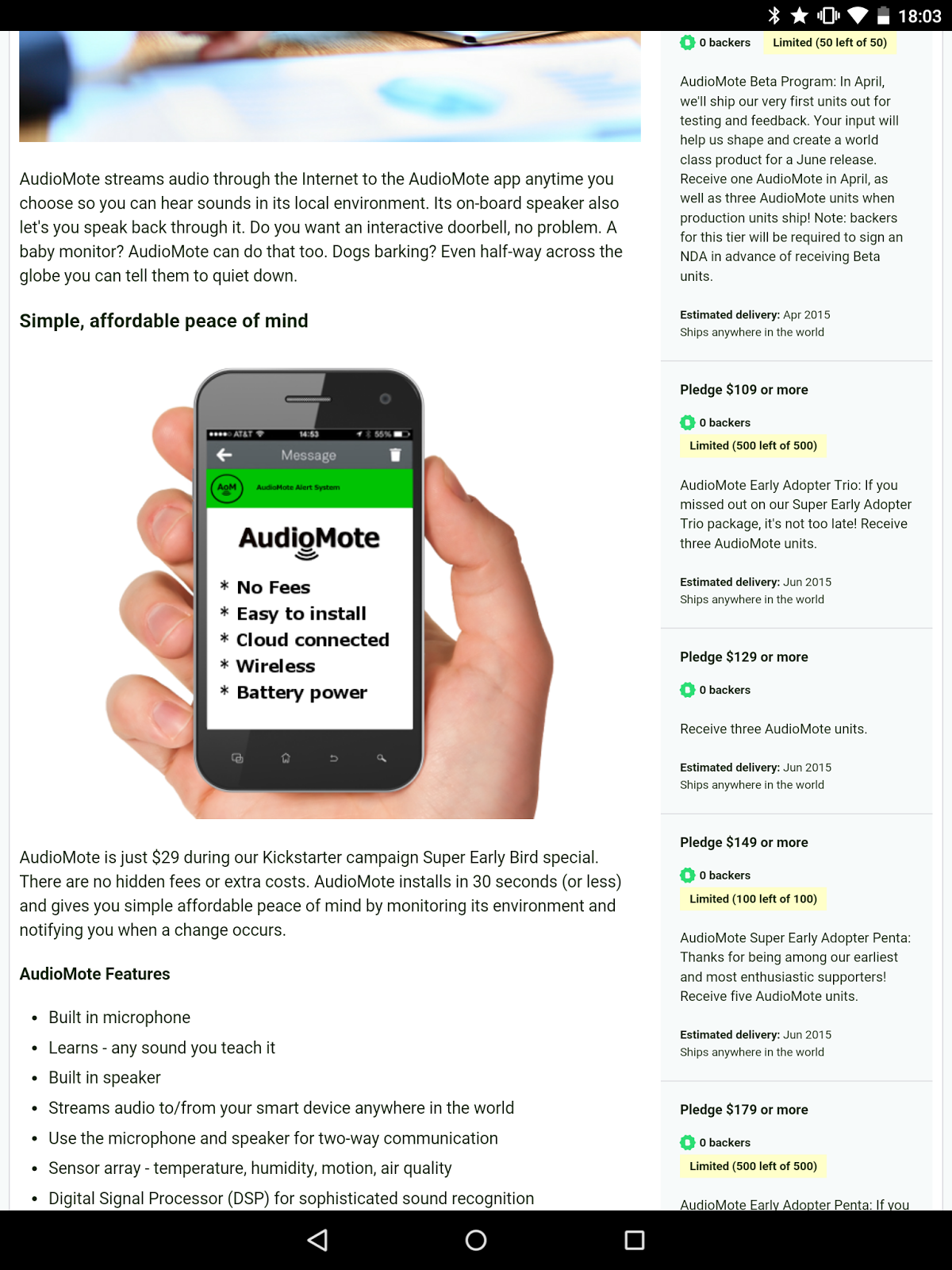 As Android community, we're already getting burned very often by large manufacturers and it's making us careful. When you choose to show only iOS devices on your campaign page it tells us that if I back your project I'll likely have to wait for features iOS users will get earlier. Personally, I'm not backing projects like that anymore.

Android users don't spend money. iOS users are where the money is. - You've probably heard this statement before. If this is true you can hardly blame the manufacturers for putting their efforts into iOS and then doing something half-arsed to tick the box for having an Android app later if they get around to it.

I would not be surprised if this attitude in the industry was the cause for Android users not spending the money to these products. It's quite natural. If you show that you don't care about my UX I'm not going to give my money to you.

If you think that Android users would not buy your products maybe the fault lies with you and not with Android users? Are you creating products worth buying? Can you really afford to ignore 80% of the potential market?

This post turned out to be a bit more whiny than I intended it to be but I think the point becomes clear. While in many areas Android has finally became a first class platform in hardware companion apps there's a lot of space for improvement.

While there are hardware manufacturers who are already pushing quality of their mobile software they're more of an exception than a rule. I see this as a lot of unused potential. A manufacturer doing their Android apps right can differentiate positively from the crowd. Any takers?