Wallaroo is a high-performance, open-source framework for building distributed stateful applications. In an earlier post, we looked at how Wallaroo scales distributed state. In this post, we’re going to see how you can use Wallaroo to implement multiple data processing tasks performed over the same shared state. We’ll be implementing an application we’ll call “Market Spread” that keeps track of the latest pricing information by stock while simultaneously using that state to determine whether stock order requests should be rejected.

Wallaroo allows you to represent data processing tasks as distinct pipelines from the ingestion of data to the emission of outputs. A Wallaroo application is composed of one or more of these pipelines. An application is then distributed over one or more workers, which correspond to Wallaroo processes. One of the core goals for Wallaroo is that the application developer can focus on the domain logic instead of thinking about scale (see this post for more details).

In this post, I’m going to explain how to define Market Spread as a two-pipeline Wallaroo application that involves a single state partition shared by both pipelines. The principles described here can easily be extended to more complex applications.

First, we’re going to look at what a “pipeline” means in Wallaroo. Next, we’ll look at how Wallaroo state partitions work. And then, with these two sets of concepts in mind, we’ll implement “Market Spread” with two pipelines, each interacting with the same state partition.

The Market Spread application will ingest two incoming streams of data, one representing current information about stock prices (we’ll be calling this “market data”) and the other representing a sequence of stock orders. The application will use the stock pricing information to update its market state partition. Meanwhile, it will check the stream of market orders against that same market state partition to determine if it should emit alerts to an external system. We’ll look at some of the code for this application in the body of the post, but you can go here to see the entire example.

The simplest possible pipeline would consist of just a source. However, this wouldn’t do anything useful. In practice, a pipeline will either terminate at a sink or at a state computation that updates some Wallaroo state. Here’s an example of a pipeline definition taken from an earlier post describing a word count application:

We set up a new pipeline with the new_pipeline() API call, where we specify the pipeline source. Here, the source receives lines of text over TCP. We send these lines to a parallelized split computation that breaks them into individual words. These words are then sent to a state computation that counts the words and updates running totals in a state partition. Finally, we send our running totals to a sink that writes the outputs over TCP to an external system.

In addition to computation metrics, Wallaroo records pipeline-specific metrics which are sent over TCP to either the Wallaroo Metrics UI or a user-defined system that understands our protocol. Via the Metrics UI, you can see the latency from the point of ingestion into the pipeline to the end point of that pipeline, whether that is a sink or some state computation. You can also see the pipeline throughput.

We explored how Wallaroo handles distributed state in some detail in an earlier post. Here we’re just going to look at the basics. Wallaroo provides in-memory application state. This means that we don’t rely on costly and potentially unreliable calls to external systems to update and read state. This is good for performance and for providing correctness guarantees. For our purposes here, though, the most important aspect of Wallaroo state is how it is partitioned within and across workers.

When you define a stateful Wallaroo application, you define a state partition by providing a set of partition keys and a partition function that maps inputs to keys. Wallaroo divides its state into distinct state entities in a one-to-one correspondence with the partition keys. These state entities act as boundaries for atomic transactions (an idea inspired by this paper by Pat Helland). They also act as units of parallelization, both within and between workers. 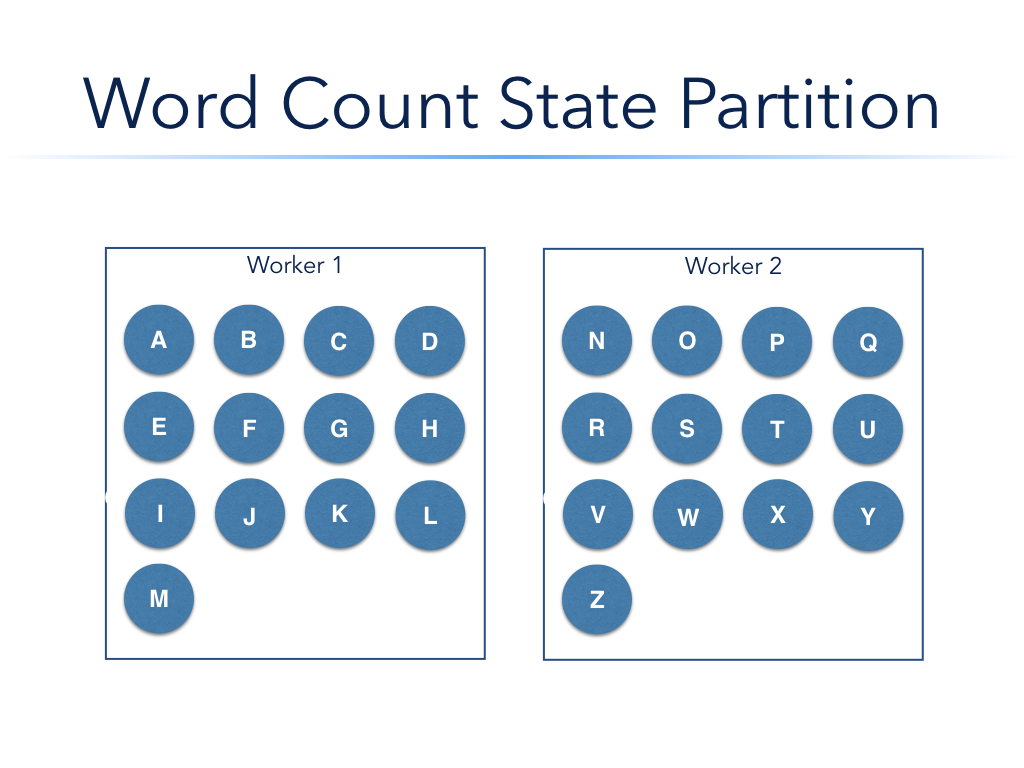 So far, we have looked at an application that has a single pipeline. We’re now ready to move to a two-pipeline application. For this purpose, we’re going to build an application called Market Spread. The purpose of this application is twofold: (1) to keep track of recent data about stock prices (“market data”) and (2) to check streaming orders against that market state in order to detect anomalies and, if necessary, send out alerts to an external system indicating that an order should be rejected. These two purposes conveniently map to two Wallaroo pipelines.

As mentioned above, each pipeline has a data source. In the case of the Market Spread application, we have two incoming streams of data. On one hand, we have a stream of recent market data that we will use to update market state by stock symbol. On the other hand, we have a stream of orders that we will check against that market state. The following diagram illustrates the structure of the application: 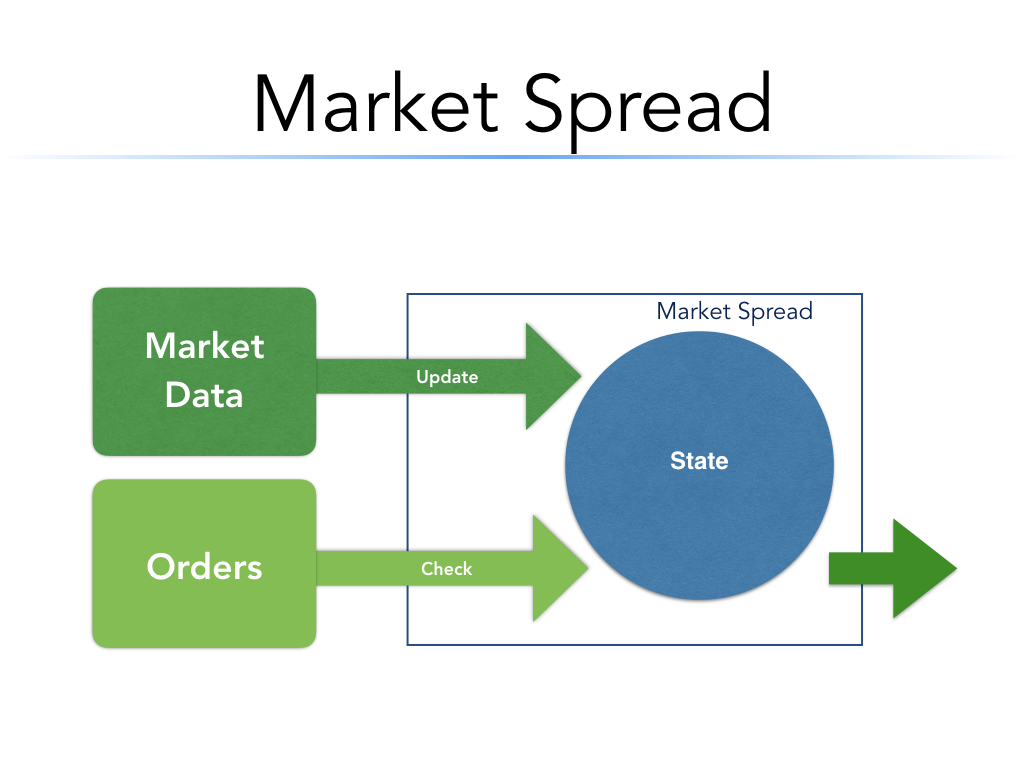 I mentioned above that, in practice, a pipeline will either terminate at a sink or at a state update computation. Our first pipeline ingests recent market data and uses that data to make updates to our market state. At that point, there is nothing left to do, so the pipeline terminates. Our second pipeline ingests orders, checks those orders against the market state, and then, under certain conditions, sends out an alert to an external system indicating that an order should be rejected. This means that the second pipeline terminates at a sink, since we will sometimes be emitting outputs.

You’ve probably already noticed that we’re going to be sharing state across these two pipelines. We want to check our orders against the same market state that we’re updating in our first pipeline. So how do we do this? The short answer is that we give the state partition a name (represented as a String) and use this in the definition of both pipelines. We’ll see how this works in the context of defining the entire application.

In order to define a Wallaroo application using the Python API, we must first define a function called application_setup() where our application definition will go. We begin by setting up our TCP addresses and our state partition keys:

Wallaroo provides the helper methods tcp_part_input_addrs and tcp_parse_output_addrs to parse the command line arguments --inputand --output respectively for addresses in the format host:port. Meanwhile, we define a couple of helper functions to define our partition keys, which are going to be numbers derived from stock symbols. load_valid_symbols() loads in a sequence of symbol strings from a text file. If a stock symbol is under 4 characters, we pad it with spaces on the left so that it’s 4 characters long. str_to_partition() then takes the resulting String and derives a numerical value. The numerical values will serve as the keys into our state partition. Here are the helper functions for reference:

We are now ready to define our first pipeline:

We name this pipeline “Market Data” and define a source and a state partition. Notice that the pipeline definition ends in a call to done(), which means that the pipeline terminates without reaching a sink. We define this pipeline’s source as a TCP source using the input addresses we parsed earlier and a class called MarketDataDecoder for decoding our binary representation of data about a symbol. MarketDataDecoder is defined as follows:

The details are not important for our purposes here. What matters is that we implement three methods. header_length() returns the length in bytes of each binary message header sent over TCP. payload_length() takes a header and derives the message payload length. Finally, decode() takes the binary payload itself and derives a MarketDataMessage, which we will use to update our market state.

Once the source is defined, we move to the state partition, which was defined as follows:

This call tells Wallaroo two things. First, it defines the state partition, telling Wallaroo how many state entities there will be (one per key), how to initialize each state entity, and how to map inputs to partition keys. Second, it tells Wallaroo that, in this pipeline, we want to perform a certain state computation against whichever state entity we route our input to. In this case, the state computation is UpdateMarketData, which is defined as follows:

The details of the logic are not important for the purposes of this post, but the short version is that we use the current bid-ask spread for a given stock symbol to determine if we should reject orders for that symbol.

A state computation returns a tuple representing the output of the computation and a boolean signifying whether we changed state. In this case, we return None for our output since we are only updating state. And we return True because we updated state.

Our call to done() indicates that we are finished defining this pipeline. But we actually want to use the state we’re updating. So now we must define our second pipeline:

This time, we name the pipeline “Orders” and we use the OrderDecoder, which takes incoming binary data and derives an Order object (it’s similar to the MarketDataDecoder we saw above). We then define the state partition again. You’ll notice that the definition is the same as with the first pipeline with the exception of CheckOrder, which is the class responsible for checking the order against market state and potentially emitting an OrderResult if an alert is called for.

Currently, Wallaroo requires some redundant information when specifying that a state partition defined earlier is used in a later pipeline. We will eventually simplify this aspect of the API, but for now, when sharing the same state partition across pipelines, you will copy the same call with the exception of the state computation class (in this case CheckOrder). In particular, make sure you are using the same string identifier for the state partition.

Here is the definition of our state computation for this pipeline:

Finally, we define the pipeline sink via a call to to_sink(). We supply the output host and port that we parsed earlier as well as a class responsible for encoding an OrderResult object into a binary format that the external system knows how to read.

In this post, we implemented the Market Spread application as a two-pipeline Wallaroo application. We looked at what “pipelines” mean in the context of a Wallaroo application. We saw that Wallaroo partitions state by keys within and across workers, and that an app developer must provide those keys and a partition function that Wallaroo will use to route messages to the appropriate state entities. Finally, we used these concepts to implement a two-pipeline Market Spread application that used one pipeline to update a state partition and another to check data against that state and potentially output the results to an external system.

If you’d like to see the full code, it’s available on GitHub. If you would like to ask us more in-depth technical questions, or if you have any suggestions, please get in touch via our mailing list or our IRC channel.

Published at DZone with permission of Wallaroo Labs. See the original article here.