As mentioned in Part 1 of the blog, we need to run Prometheus and Grafana in the Kubernetes environment on our Amazon EKS. The recommended way is to use Kube-Prometheus, an Open Source project. Not only will this simplify the deployment, but it adds a lot more components, like the Prometheus Node Exporter which monitors Linux host metrics and typically used in a Kubernetes environment.

Clone the https://github.com/coreos/kube-prometheus repository from Github, but do not create any manifests just yet.

Components included in this package:

This tutorial works on the basis that the manifests which bring up the relevant resources for Prometheus Operator are still located in the folder `manifests`.

Please adjust accordingly if changes have been made since as the repository is experimental and subject to change.

The ServiceMonitor tells Prometheus to monitor a Service resource that defines the endpoints Prometheus scrapes for incoming metrics provided by the couchbase-exporter. This file, couchbase-serviceMonitor.yaml, should be kube-prometheus/manifests directory.

The `Service` will define the port that we described in our ServiceMonitor at `spec.endpoint[0].port` earlier. This file, couchbase-service.yaml, should be kube-prometheus/manifests directory.

Prometheus discovers the monitoring end points, dynamically, by matching the labels on the ServiceMonitor to the Services which specify the cluster and end points, Port 9091 in our case.

Follow the specific command given in the GitHub README to bring up our created resources along with the other provided default manifests.

Components such as Prometheus, AlertManager, NodeExporter and Grafana should then startup and we can confirm this by inspecting the pods in the namespace `monitoring`.

Create the Kubernetes namespace and CRDs

Wait for a few minutes before the next step, but it may be necessary to run the command multiple times for all components to be created successfully.

Components such as Prometheus, AlertManager, NodeExporter and Grafana should then startup and we can confirm this by inspecting the pods in the namespace `monitoring`.

Check that Our `ServiceMonitor` Has Been Created

Check that Our `Service` Has Been Created

In the above output, we not only see the services, but also the ports. We will use this information to forward these ports, like we did with the Couchbase Administration UI, in order to access these services.

To check that all is working correctly with the Prometheus Operator deployment, run the following command to view the logs:

We have already forwarded the Couchbase Admin UI port 8091 from one Couchbase node previously, but I’m giving this again, this time from the service.

In addition to that port, we actually need only the Grafana service access, Port 3000. However, let’s access Prometheus service Port 9090 as well. Then we can take a look at all the metrics from the different exporters and try a little PromQL, the Prometheus Query Language as well.

Now, the 3 above should be sufficient. However, there’s some additional advantage of taking a look at the metrics from each individual service as well. The Couchbase exporter exposes the Couchbase metrics on Port 9091. So, we can forward those ports as well. Note that you really need only access to Grafana. 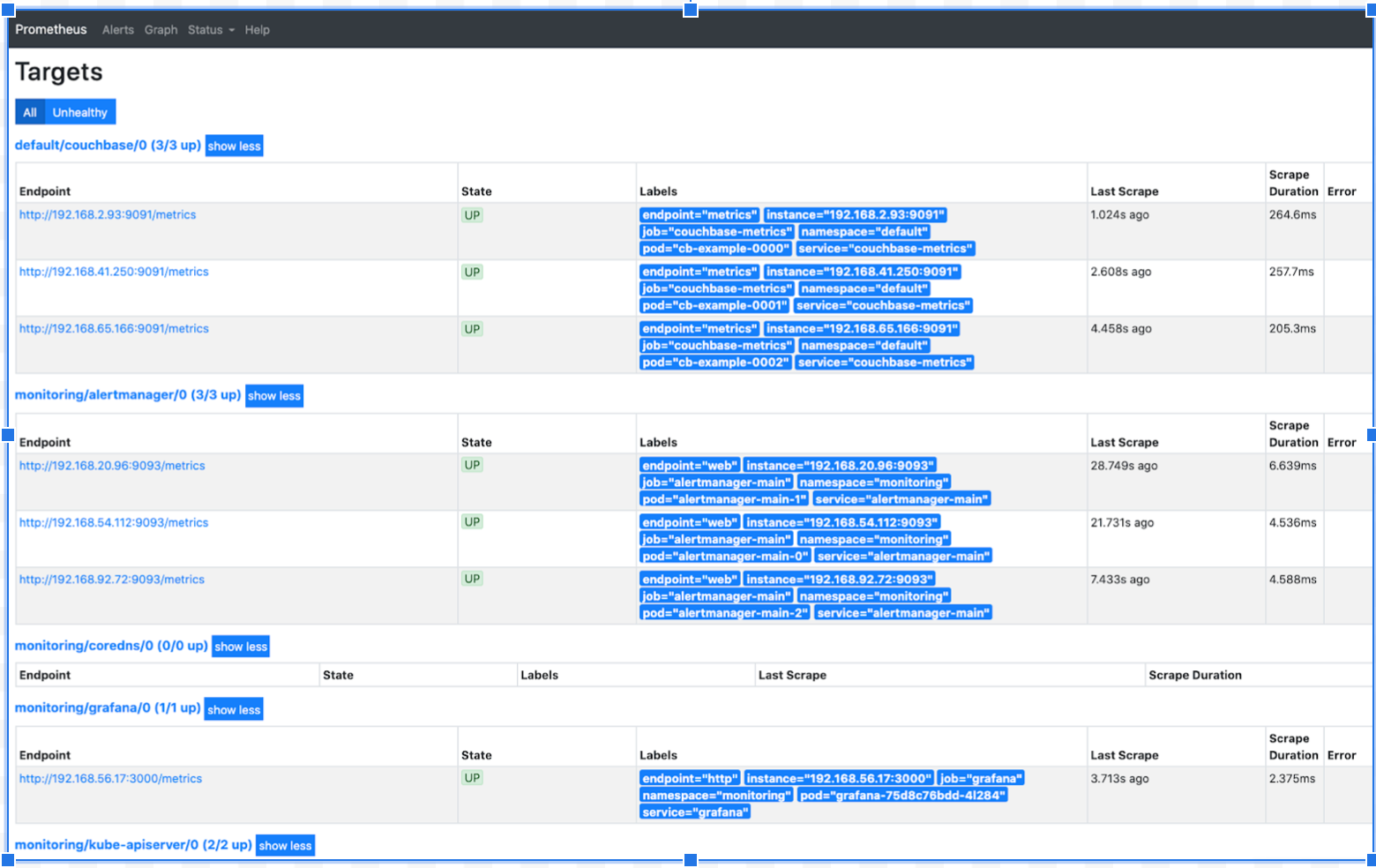 All Prometheus targets should be UP. There are quite a few of these since Kube-Prometheus deployed a bunch of exporters.

Check out the Raw Couchbase Metrics

This output is useful as you can rapidly search through the list.

The drop box gives you the list of metrics scraped. This is the complete list of all the metrics scraped by all the exporters and that's a pretty daunting list.  One method to narrow down the list to just Couchbase metrics, is of course, to access the 9091 endpoint as previously described.

The kube-prometheus deployment of Grafana already has the Prometheus Data Source defined and a large set of Default Dashboards. Let's check out the Default Node Dashboard

We will not be building a complete Dashboard, but a small sample with a few panels to show how it's done. This dashboard will monitor the number of items in a bucket and the number of GET and SET operations.

Note: Please have the pillow-fight application running as described in Part 1. This will generate the operations which we are interested in monitoring.

We are interested in the current items in a bucket. There are a couple of metrics which supply that, cluster wide and per node. Let's use the per node metric. We will then allow Prometheus to handle all aggregations, as per best practices. Another advantage is that we can even show the current items in the bucket, per node basis just to check if our data set is skewed.

Let's take a look at one Element:

In the above example, we are interested in these labels: bucket, part of node (the middle part, cb-example which is the cluster name, and pod. We are also interested in service in order to filter. These will help us design a dashboard where we can view the metrics by bucket, node or cluster. 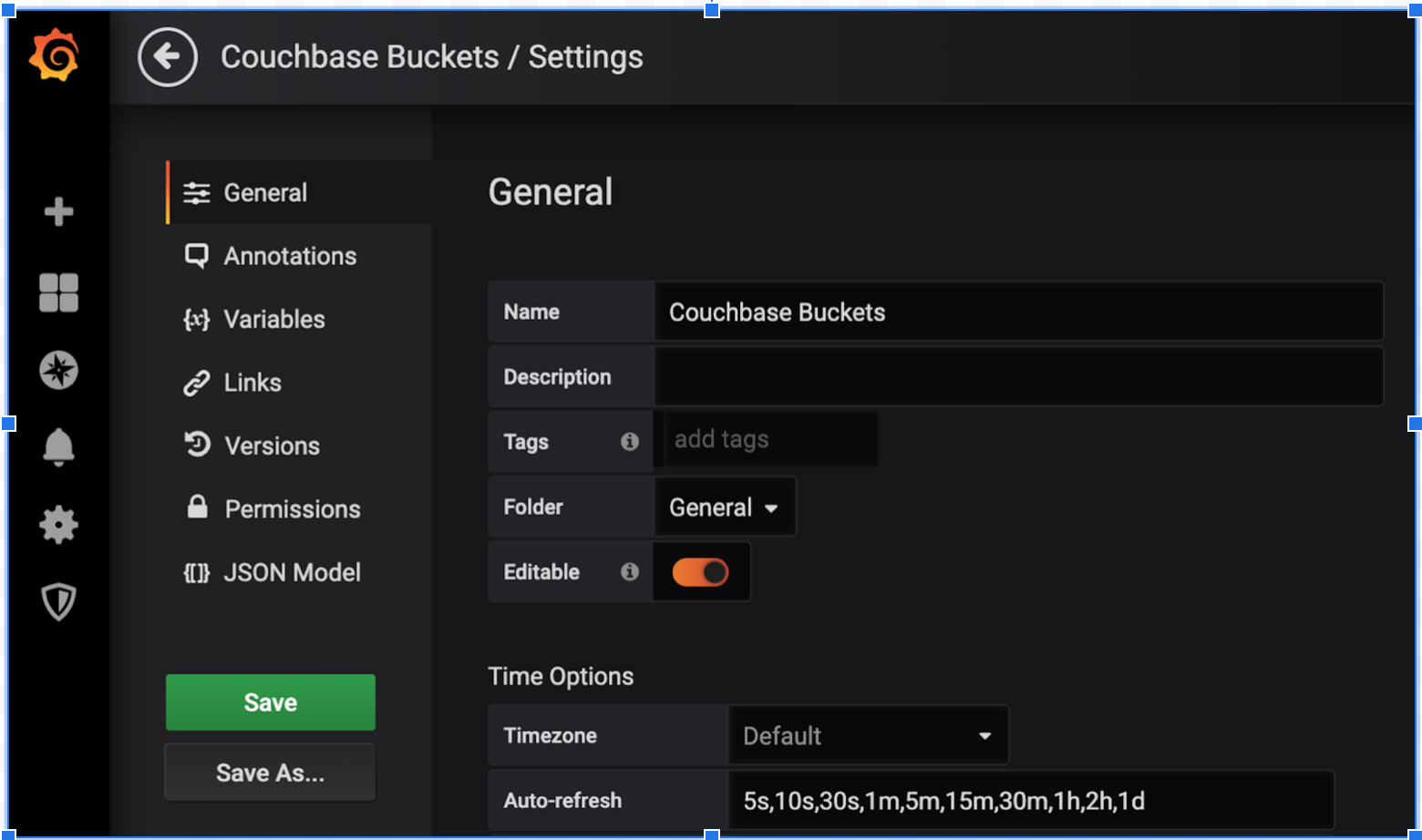 Since we want the metrics per bucket, node, and cluster, let's add these variables so that they can be selected in a drop box. 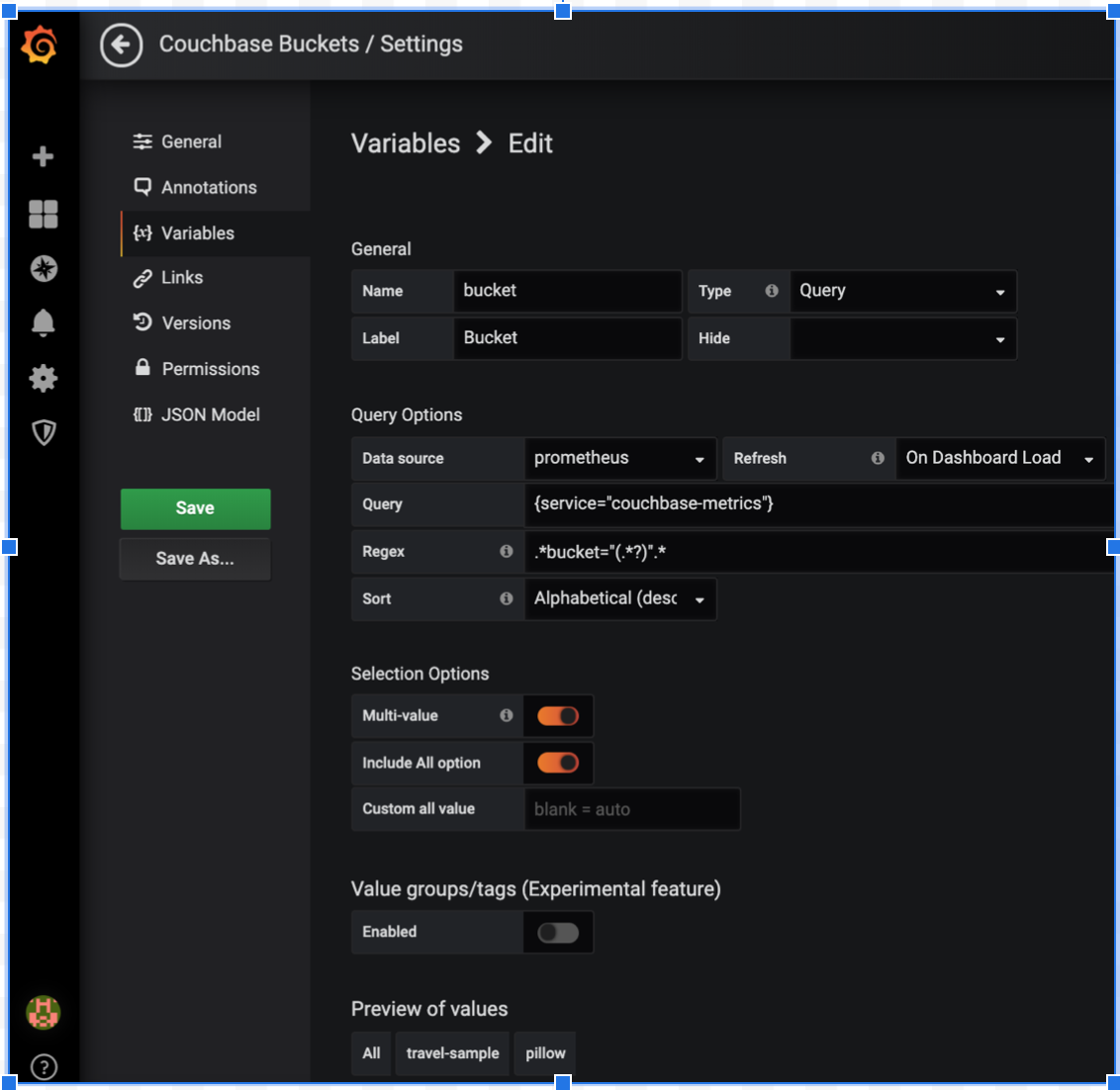 The above example creates the variable bucket. Note the Query and Regex expression. Let's create 2 more so that we have 3 variables: 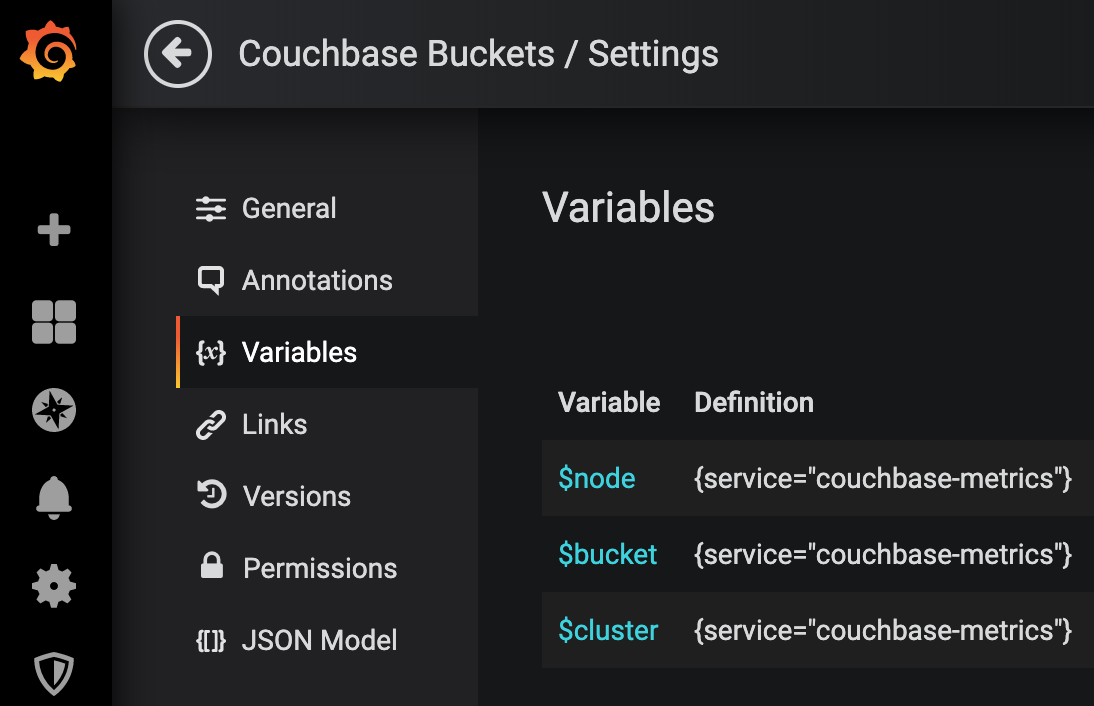 The Query does not change for these 3, but here are the Regex expressions:

Create 3 Panels for Current Items, GETs, and SETs

You can duplicate each panel and edit them. These are the queries: 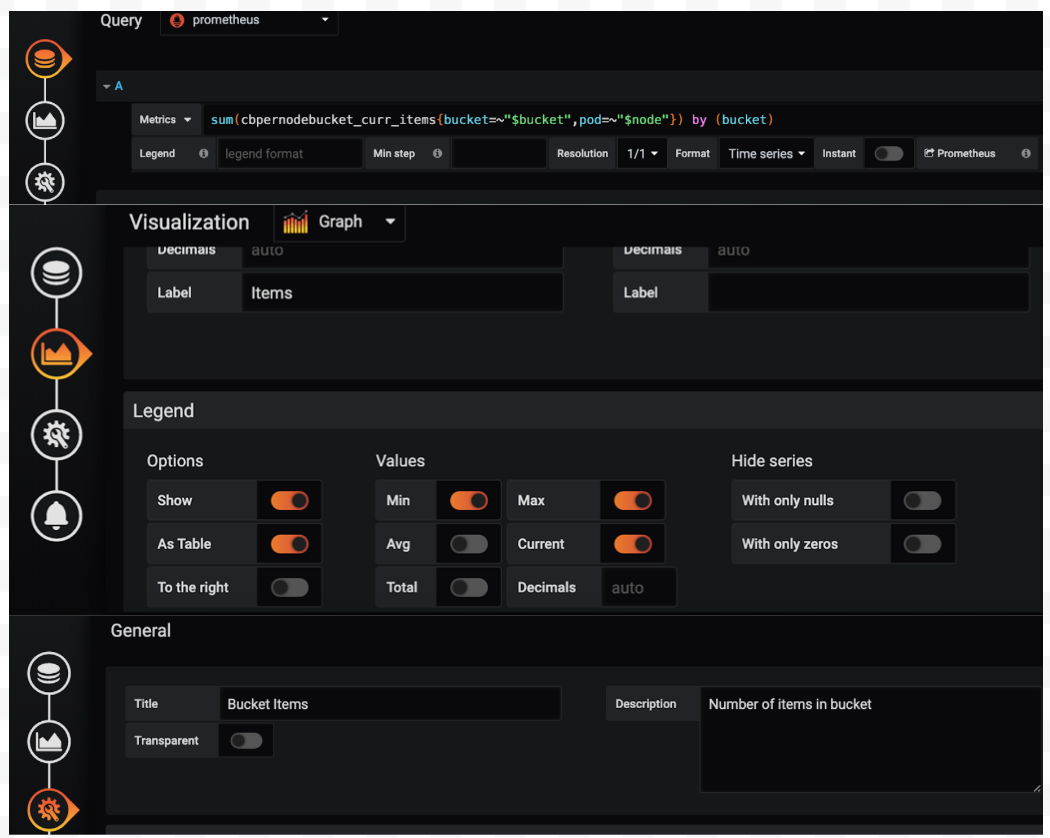 This is how our final sample dashboard looks like.

Finally, clean up your deployment: