this has been roughly adapted from this serverfault question for the case when it gets removed/deleted/closed.

the question was about how to configure a flash game server on linux, but on ec2.  i had a good look around, but didn't find any true step-by-step ec2 tutorials for proper beginners.  so i made one.  this one is fairly specific to smartfox server towards the end, but the first few bits about creating an instance, and adding stuff to the security group should be generic enough to be useful.

right.  you'll need to get a vps, or at least an amazon ec2 cloud instance to run this on. i'm 99.99% certain that you can't use the free package at 000webhost to do this.  they're a pure webhost, and you need somewhere you can configure and install java, and the smartfox server.

you'll need to provide them with a credit/debit card number, but they won't charge you as long as you keep within the free tier resource limits.

once you've got an account, go here and start an ec2 instance.

this all assumes you know a bit about linux, but if you create your first instance using ubuntu linux 12.04 64-bit server, it'll make everything a bit easier!

when you click to create an instance you get this chooser: 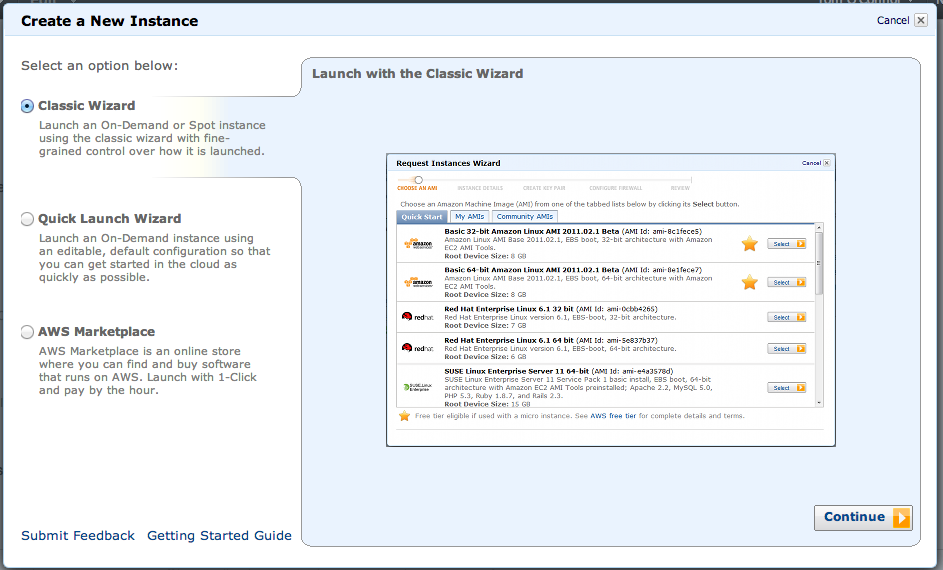 select "classic wizard" and this ami to boot.

select the for this instance..

and the defaults on the next page too.

and then name it.

you now need to create a ssh key, and name that too.  when you click "download keypair" your browser will save the private key.  keep this safe, because if you lose it, you've effectively lost the master key to your new server.

now we need to create a security group.  this is the firewall of amazon ec2.

add inbound rules for ssh, http and https.  this'll be enough for now.

review the selections you've made.

hurrah! it should now be booting..

time to get into it.  this is the control panel.

select your new server instance, and right click it and you get this menu.

which is nearly right, except as it's an ubuntu instance, you want to

gonna need the smartfox installer next ..

download with wget, then tar xzvf and extract it.

so, you can go ahead and start the damn thing now.

interestingly enough, it looks like smartfox needs port 8080 opening up on the aws security group firewall.

on the sidebar of the control panel, there's a security groups link.

add the rule, and **apply the changes**.

you should now be able to reach your smartfox game server on the dns name given to you by amazon ec2 in the control panel.  it's the same bit you ssh'd to earlier.