let’s break this down, just a little.

a view is nothing but a query. the definition given by microsoft is that it’s a virtual table that’s defined by a query. it’s a query that is used to mask data or perform a complex join or similar behaviors. views are queries that get stored in the database. views can be easily referred to as if they were a tables. that’s it. i’ve written in the past about views , including how they can possibly perform poorly .

a stored procedure is also a query, or a series of queries, or, a whole lot more. microsoft’s definition of a stored procedure basically defines it as programming object that can accept input through parameters, perform actions, and provide various types of output. stored procedures are also stored in the database, but that’s about the end of the direct correlations to a view. heck, you can call views from stored procedures, so i’m really at a loss as to where this tip comes from.

in short, yes, both these objects have in them queries, but these are fundamentally different objects. you can’t really say that using one or the other is faster because they each do different things. further, you can write code that will perform poorly using either construct.

here’s the view definition i’m going to use for the tests:

we’re also going to create another stored procedure that uses the view:

because stored procedures and views are different, we’ll have to call these different objects in different ways:

in this way, we can run each of these queries independently and compare the results between them.

if you run each of the queries above, you will find that they all create a nearly identical execution plan:

you can click on that to make it bigger. if we compare all the different plans, one set of details does stand out: 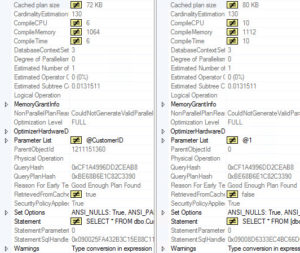 there is a difference in the compile time between the view by itself and the stored procedures (they were almost identical). let’s look at performance over a few thousand executions:

this is measured in microsends, so the variation we’re seeing is likely just some disparity on i/o, cpu or something else since the differences are trivial at 10mc or 5%. while that may seem like the view is suffering, please note that the view inside the procedure actually ran faster by 5%. again, this is explained by the fact that we’re only talking about a 10-microsecond difference. i’m not sure if that’s within the margin for error on the extended event sql_batch_complete or not (i couldn’t find documentation stating what it might be), but i’ll bet it’s close. i believe it’s safe to say that the average performance of these queries is identical.

what about execution time including compile time, since there is a difference:

the difference in the performance including compile time for the procedure alone is 700mc better on average than the view. that’s an 8% difference. it was almost that high for the view that used the procedure at 7%.

if we’re just talking compile time then, there is a significant win if we avoid the view. this is no doubt because of the extra work involved in unpacking the view and going through the simplification process within the optimizer. plus, the view alone in our query was parameterized by the optimizer in order to assist it’s performance over time (as we saw in the average results without the recompile). all that extra work explains the 8% difference.

what if we change the query around a little. i decide that all i want to see right now from the view is the customerid:

when i execute this, i get a whole new execution plan:

the execution time drops a little to around 190mc on average and the reads go from 8 to 2. the stored procedure would have to get rewritten to only return customerid. does that mean that views are faster than stored procs? absolutely not. it just means that there is some degree of flexibility built into the view, as a construct, that’s not there in a stored procedure, as a construct. these are fundamentally different objects.

what if we change the query against the view again:

once more the execution plan will change to something different than before:

performance drops to about 300mc and we get 10 reads instead of 8. does that mean that views are slower than stored procedures? no. we’re attempting to compare two different objects that perform two different functions within sql server.