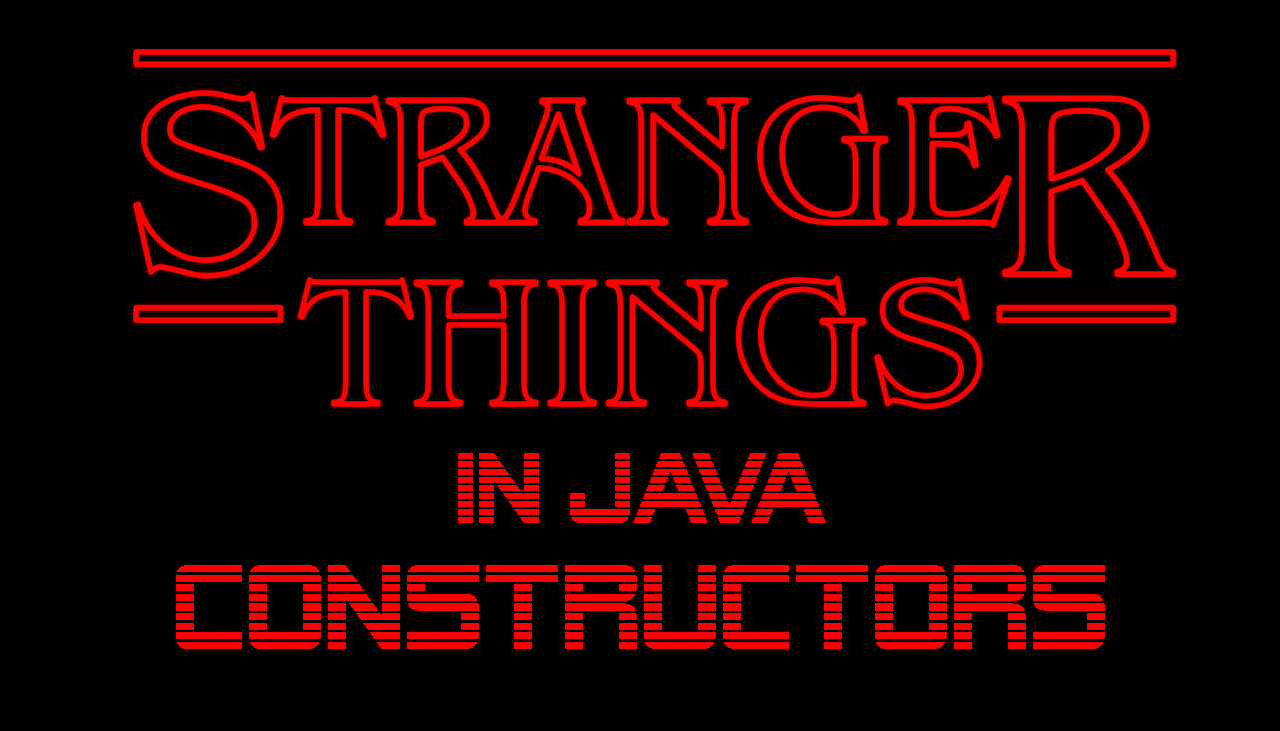 What you are reading is the second in a series of articles titled “Stranger things in Java” (find the first article here), inspired by the contents of my book “Java for Aliens”. These articles are dedicated to insights of the Java language. Deepening the topics we use every day, will allow us to master Java coding even in the strangest scenario.

We already know that a constructor is considered a special method, which by its nature, is especially suitable for the initialization of instance variables. A simple example of a constructor is the one contained within the following class:

Note that, while methods are invoked using the dot operator (the "." symbol):

The constructors are invoked through the new operator :

In particular, unlike an ordinary method, a constructor has the following characteristics:

The last point is clarified in the next section.

Inheritance is not applicable to constructors. Even when they are declared public, constructors are not inherited for a very simple reason: their own name. For example, let’s consider the following JavaBook class extension of the Book class:

For example, if we want to instantiate a JavaBook object we will write:

invoking the constructor of the JavaBook class with the new operator.

Now suppose we inherited the Book constructor in the JavaBook class. In order to use this constructor, we should be able to write the following statement:

The fact that constructors are not inherited from subclasses, is consistent with the syntax of the language, but at the same time contradicts the principles of object-oriented programming. In particular, the paradigms of reuse and abstraction seem to be violated. In fact, when the developer decided to implement the inheritance mechanism, he had to test its validity using the so-called is a relationship. To the question: "can an object instantiated by the candidate subclass also be considered an object of the candidate superclass?" he has indeed answered affirmatively.

In this particular case, a Java book is a book, and therefore it must have all the characteristics of a book. In particular, the constructor must also be reused. Not being able to inherit it, however, abstraction seems to have been violated. Instead, it is precisely in such a situation that Java demonstrates its consistency. In fact, we can add another property to the constructor definition:

For example, let’s add some convenience constructors to the Book and JavaBook classes

The reader, having learned that the constructors are not inherited, should conclude that the instance of a JavaBook, through a syntax of the type:

would output the following string:

The output instead will be:

In fact, the JavaBook constructor first invokes the constructor of the superclass Book and then it executes. The mandatory call to a superclass constructor is made using the super keyword, which is introduced below.

In fact, in every constructor, there is always a call to the constructor of the superclass, through a special syntax that uses the super keyword, which is used as a method to pass parameters to. Again, if the instruction is not explicitly present, it will be added in the bytecode at compile time. For example, in the JavaBook class, the constructor will be modified by the compiler as follows:

Now suppose we want to modify the superclass Book as we saw in the first example of this article:

This class can compile successfully, but its JavaBook subclass no longer:

So, modifying the superclass, we introduce an error in the subclass. By interpreting the compiler's error message, however, one can guess what happened: it all depends on the hidden work of the compiler.

To fix the problem, the best solution seems to modify the JavaBook class as follows:

With the previous syntax, we have explicitly invoked the superclass constructor which takes a string as input.

The JavaBook class could call the most suitable constructor depending on the case:

Overload, Constructors, and the this Keyword

Note how the constructors invoke each other avoiding duplicating already written code.

In this way the reuse paradigm will be favored.

Clarification on How Constructors Call Each Other

declares a first constructor that invokes the second with the this() statement. In the second constructor, however, the compiler explicitly adds the super() statement as the first statement. The call to a superclass constructor (which in this case is the Object class) has only been postponed.

We cannot even call a constructor using the super or this keywords from an ordinary method. Only constructor can use these instructions.

We know that there is no constructor inheritance, but the instantiation of a subclass, thanks to the super statement, will always cause a call to a superclass constructor. In any case, since there is no inheritance, it makes no sense to speak of override of constructors, or constructor polymorphism. But there is a situation that concerns the constructors and the order in which they are executed with respect to the initialization of the attributes, to be taken into account, and which we will explain below.

Since the scenario is a bit complex to explain in the abstract, let's get into the context of a code example. Let's consider the following abstract class Tool:

Finally, consider the following class that instantiates the Hammer subclass:

These classes are compiled correctly, but by launching the ToolsTest class, we will get the following output at runtime:

in fact, the data variable is used before it can be initialized in the subclass, and therefore still has a null value. In particular, when we invoked the constructor of the Hammer class, as the first (implicit) instruction, the constructor of the Tool superclass was invoked, which in turn directly invokes the doWork method, which prints the message when the data variable had not yet been initialized.

In this case, we only got an incorrect output, but actually, the use of references with null values can easily lead to the runtime being interrupted by NullPointerException type exceptions. For example, if we modify the doWork method in the subclass as follows:

then the program would print the following output:

In this article, we have seen how a basic argument of the language such as constructors actually hides even complex scenarios. As usual, having a solid theoretical basis will allow us to manage all use cases without surprises. With the keywords this and super, we will be able to correctly manage reuse and abstraction paradigms even with constructors, although they are not inherited and consequently it is not possible to rewrite them in subclasses. We have also seen how important it is to know the compiler behavior. In fact, although the insertions of implicit code in the bytecode have been designed to facilitate learning and reduce the verbosity of the language, actually they can also lead to malfunctions of the code if not properly mastered.

This article is inspired by various paragraphs the book 'Java for Aliens.' Actually, the topic is explored further in other chapters .