In this tutorial, I will show you the easiest way to fetch tweets from Twitter using Twitter's API.

We will fetch some tweets, store them into a DataFrame and do some interactive visualization to get some insights.

In order to access Twitter's API you need to have the below:

We start by storing our keys and tokens in variables

Next we import the libraries we'll use for now:

Tweepy is the library we'll use to access Twitter's API. If you don't have any of those libraries you can just run a pip install for the missing library.

Now we authenticate using our credentials as follows:

Once we are authenticated it's as simple as just picking any topic we want to search for on Twitter to see what people are tweeting about in the context of that topic.

For example, let's pick a very generic word, "Food," see what people are tweeting about in that context:

api.searchgenerally returns a lot of attributes for a tweet (one of them is the tweet itself). Other attributes are things like the user name of the Twitter user sending the tweet, how many followers they have, if the tweet was retweeted, and many of other attributes (we will see how to get some of those later).

For now, what I am interested in is just the tweet itself, so I am returning tweet.text.

The result is as follows: 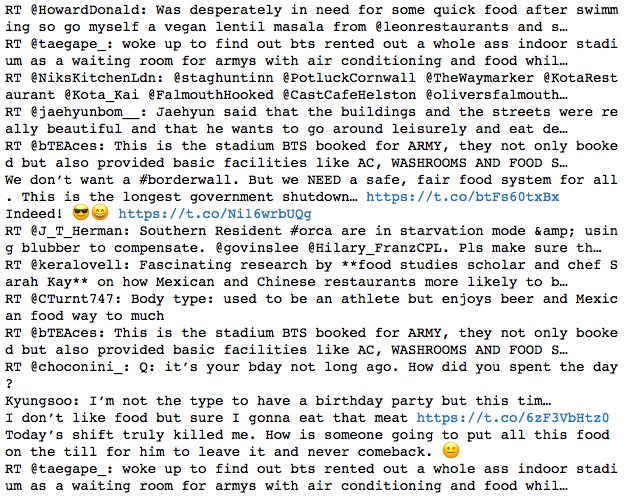 By default, api.search returns 15 tweets, but if we want more tweets we can get up to 100 tweets by adding count = 100. Count is just one of the arguments we can play around with among others, like the language, location, etc. You can check them out here if you are interested in filtering the results according to your preference.

At this point, we managed to fetch tweets in under 15 lines of code.

If you want to get a larger number of tweets along with their attributes and do some data visualization keep reading.

Getting the Tweets + Some Attributes

In this section, we will get some tweets plus some of their related attributes and store them in a structured format.

If we are interested in getting more than 100 tweets at a time, which we are in our case, we will not be able to do so by just using api.search. We will need to use tweepy.Cursor which will allow us to get as many tweets as we desire. I did not get too deep into trying to understand what Cursoring does, but the general idea in our case is that it will allow us to read 100 tweets, store them in a page inherently, then read the next 100 tweets.

For our purpose, the end result is that it will just keep going on fetching tweets until we ask it to stop by breaking the loop.

I will first start by creating an empty DataFrame with the columns we'll need.

Next, I will define a function as follows.

Let's look at this function from the inside out:

Now, I can just call my function as follows, looking for tweets about food again and naming my file "my_tweets."

It will keep running until 1000 tweets are returned (of course you can set the limit to whatever number of tweets you may want to get).

Okay, now I can open the Excel sheet in my directory to see the result or get the result in my DataFrame as follows:

Okay, great! Everything is working as planned.

In this section, we will do some interactive visualization on 200,000+ tweets that I already had streamed and saved to get some insights.

I will be using plotly based on this article to produce some visualizations without going into the details of using plotly. If you are interested in more details about the capabilities of plotly, you can check the article, it is a great resource. Note that if you want to play with the actual interactive visualizations you need to go to this link as I posted them below as pictures.

Let's look at our DataFrame:

It makes sense to have some user locations missing since not all Twitter users put their location on their profile.

For User, I am not sure why those 17 entries are missing, but, anyway, for our scope here we will not need to deal with missing values.

Let's also take a quick peek at the first 5 rows of our DataFrame:

I would like to add an extra column to this DataFrame that indicates the sentiment of a tweet.

We will also need to add another column with the tweets stripped of useless symbols, then run the sentiment analyzer on those cleaned up tweets to be more effective.

Let's look at some random rows to make sure our functions worked correctly.

Okay, it seems like our functions are working. Note that doing sentiment analysis by directly feeding our text to the textblob sentiment analyzer like that will not yield 100% perfect results for all tweets. In order to do so, we need to do some more detailed text pre-processing, but for the purpose of this tutorial what we have so far will suffice.

At this point, we are ready to do some data visualization.

A few things I am interested to see are: 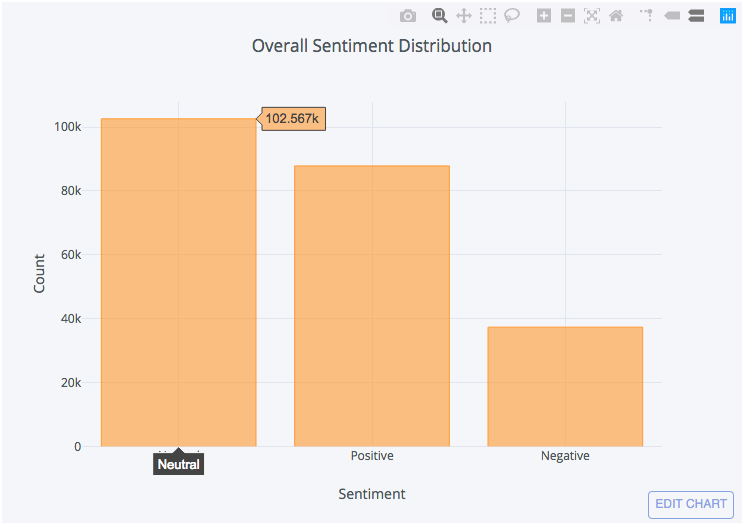 Below I just created a new DataFrame from our original one filtering with retweet counts above or equal to 50k. 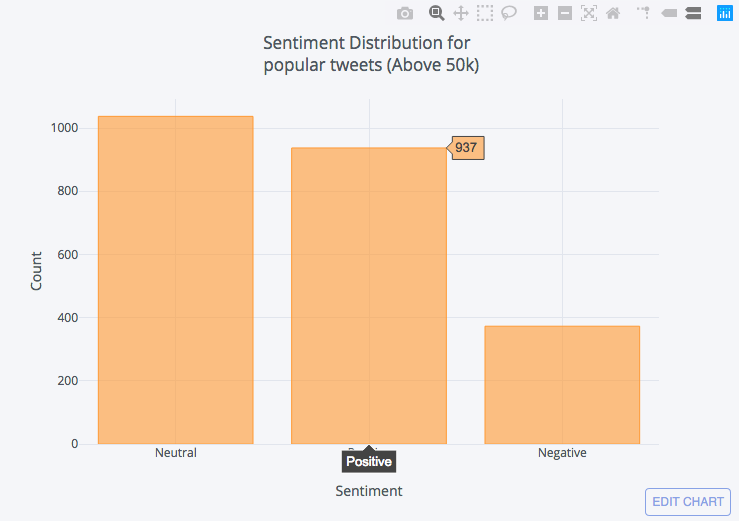 Create a new DataFrame from our original one filtering with retweet counts between 500 and 10,000. 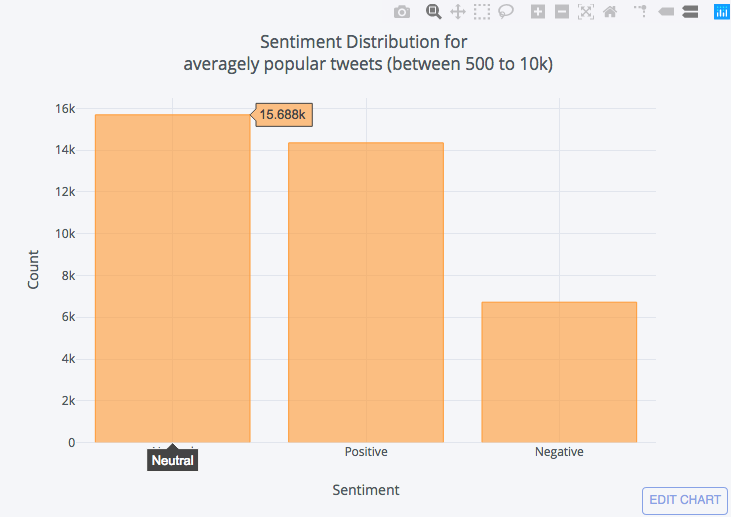 Create a newDataFrame from our original one by filtering with retweet counts less than or equal to 100. 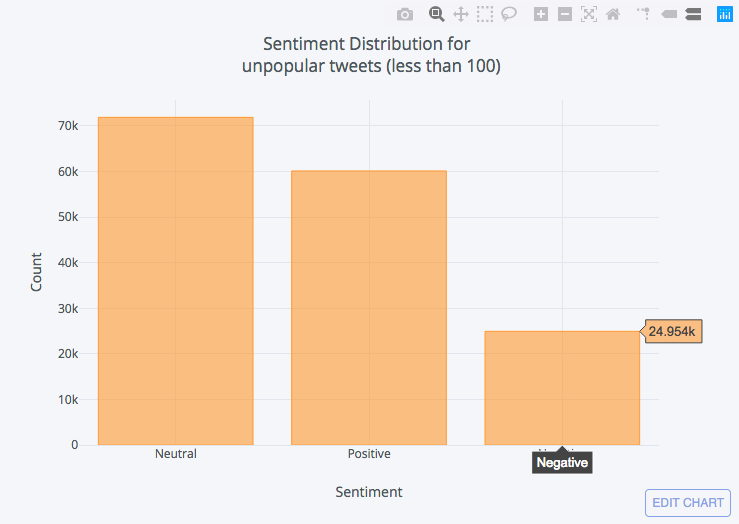 From the above charts, we can conclude that:

Correlation Between Tweeting Frequency and Followers

Here I am putting the values on a log scale to reduce the impact of outliers. 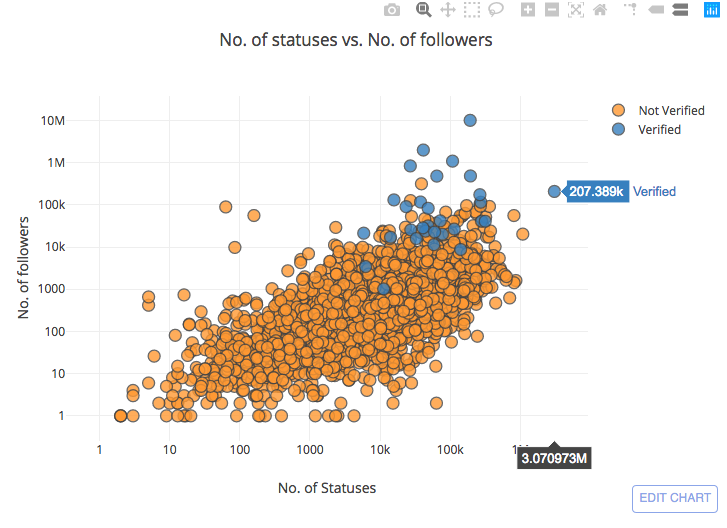 Note: in the above chart I am not using the full 200,000+ data set as it gets really slow to load it as an interactive chart. Instead, I just sampled 3,000 entries.

From the chart we conclude two things:

To visualize the most frequently used words we will use a word cloud, which is a great way to do such a task. Word clouds give us an image showing all the words used in a piece of text in different sizes where words shown in bigger sizes are used more frequently.

In order to get meaningful results, we need to filter our tweets by removing stopwords. Stop words are generally commonly used words that act as fillers in a sentence and it is common practice to remove such words in natural language processing as although we use them for our understanding of a sentence as human beings they do not add any meaning for computers when processing language and they actually act as noise in the data.

The word cloud library has a built-in stop words list that we already imported above which can be used to filter out stop words in our text.

First, we need to create join all our tweets as follows:

Next, we create the word cloud:

Note that above I am not using the built-in list of stopwords included with the WordCloud library. I am using a much larger list that includes tons of stop words in several languages, but I am not going to paste it here to avoid taking up useless space in this tutorial, as it is a very big list (you can find such lists if you search online). Anyway, if you want to use the built-in list, you can just ignore the above code and use the below:

Finally, we plot the word cloud and show it as an image: 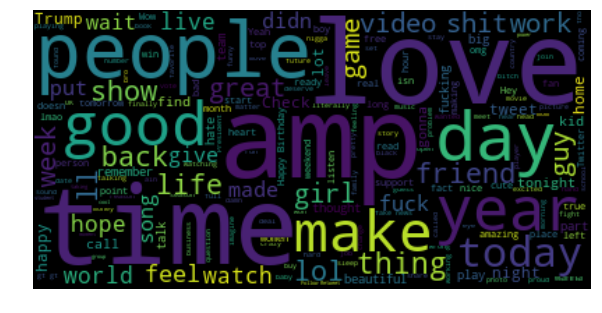 We can also plot the frequencies of words as follows: 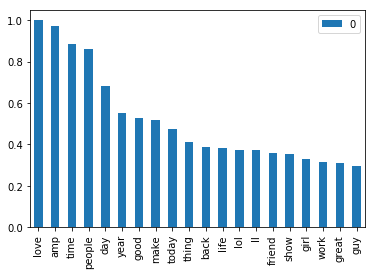 Let's do the same thing again, only for popular tweets by just changing this piece of code: 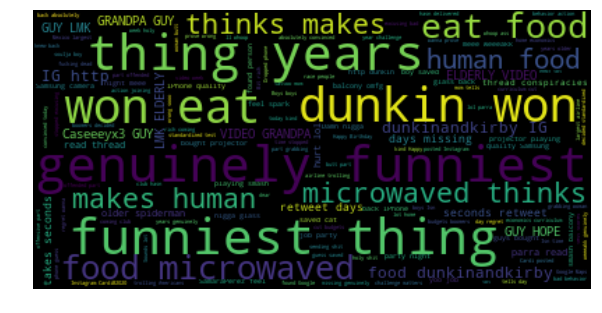 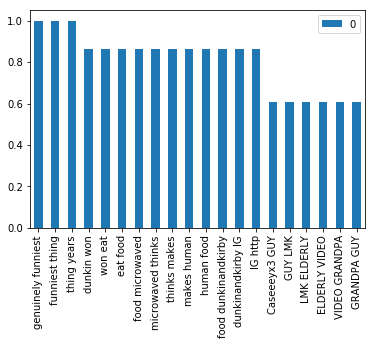 Now you get the idea of how to do this also for average and unpopular tweets.

I hope you found this tutorial useful.

This article was originally posted on https://oaref.blogspot.com/

Published at DZone with permission of Omar Aref. See the original article here.