C# doesn't have a built-in function to repeat a string. There are different versions for string.Repeat() available on the internet and it's up to the reader to find out which version works better. Here is the list of most popular implementations I found across the web. I list my findings here with the results of a simple performance test.

I found these six implementations to be most popular:

The last one is a little bit rare, actually, but I added it here as it also gave great results.

Here is the source code of all six methods. I left out sanity checks and other bullet-proofing to keep methods clean of all additional functionalities.

I ran simple performance tests on all those methods. Here is what I did:

Here are my performance test results. Times are given in milliseconds (divide by 1 thousand to get seconds). 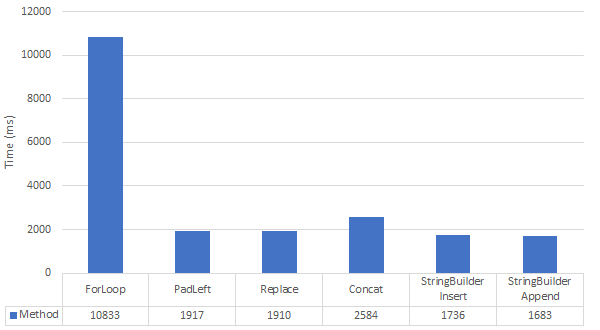 We can clearly see that ForLoop is total overkill. It doesn't have any optimizations and it results in a large number of allocations and buffer copies. It is out of the question to use this method in production. But, be warned — ForLoop works fast and doesn't show any signs of performance problems if it is not used intensively.

There are many implementations available for the string repeat method, and not all of them are equal from a performance perspective. We saw that the most primitive version using for-loop has awful performance while a more cumbersome method using StringBuilder and AppendJoin was the best. If there is more than one implementation available, then it's a good idea to run some tests to see what is the best-peforming implementation and go with this.