In a classical prediction use case, the predicted output is either a number (for regression) or category (for classification). A set of training data (x, y) where x is the input and y is the labeled output is provided to train a parameterized predictive model.

This problem is typically viewed as an optimization problem and uses a gradient descent approach to solve it.

In some cases, y is not as simple as a number or a class. For example:

In these cases, the output y can be viewed as an object. But wait, can we break down the object as multiple numbers/categories and use the classical regression/classification approach to solve it? Not quite, because the lost function cannot be just formulated as the summation of loss of individual components. For example, two French sentences using different words may still be a very good translation of the same English sentence. So we need to generalize a bit more and introduce the concept of an object and compatibility here.

The prediction problem can be generalized as: Given input x, finding an object y such that y is the "most compatible" with x. The compatibility is a parameterized function that we are going to learn from the training data.

Notice that the training process is different from classical ML in the following way.

After we learn the compatibility function parameters, at inference phase, we will apply the first optimization to the given input x to find the most compatible y_opt such that F(x, y_opt; w) is the maximum.

Rather than trying to exactly match y_hat to y in the training data, structured learning enables us to learn a more abstract relationship (ie: compatibility) between x and y so that we can output other equally good y even it is not the same as the y in the training data. This more-generalized form is very powerful when we don't have a lot of training data. The downside of structured learning is it is compute intensive because at the inference phase, it needs to solve an optimization problem, which is typically expensive. 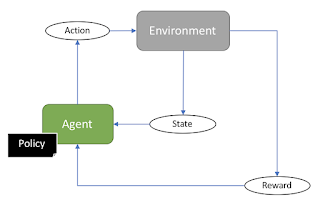 Another important design consideration is how the reward is assigned. Of course, we can use the actual reward from the environment to train the policy, but this is usually very inefficient. Imagine when playing the chess game; we only get the reward at the end when we win/lose the game. Propagating this reward all the way to each move will be very inefficient. To make the learning faster, we usually use a technique called "reward shaping" to basically assign some artificial reward along the trajectory to bias the agent towards certain desirable actions (based on domain knowledge).

One special form of reward shaping is "imitation learning" where we assign intermediate reward based on how the action "similar" to when an expert does in real-life circumstances. Let's say we collect a set of observations that the expert is taking action y in state x, and try to learn a model that the agent will bias to take action y when seeing state x. But wait, does it sound like a supervised learning problem? Can we just train a prediction model from x to y and then we are done?

Unfortunately, it is not as simple. Expert data is typically very sparse and expensive to get, meaning we usually don't have too many data from the expert. Imagine in a self-driving program, if we want to learn how to react when the car is almost crash, we may not find any situation in the expert's observation because the expert may not run into such dangerous situation at all. On the other hand, we don't need to copy exactly when the expert did in every situation, we just need to copy those that are relevant to the situation.

"Inverse Reinforcement Learning" comes to the rescue. Basically, it cuts off the reward from the environment and replaces it with a "reward estimator function," which is trained from a set of expert behavior, assuming that expert behavior will achieve the highest reward. 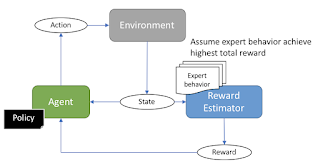 The underlying algorithm of inverse reinforcement learning is based on the "structured learning" algorithm. In this case, the x is the start state, y is the output of the trajectory of the expert, which is basically the training data. And y_opt is the output of the trajectory based on the agent policy, which is learned from the reward function using Reinforcement Learning algorithm. The compatibility function is basically our reward function because we assume expert behavior achieves the highest reward.

Then we bring it to the structured learning algorithm as shown below: 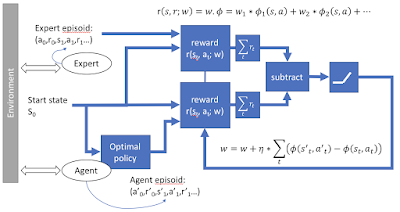 The agent still needs to interact with the environment (or simulator) to get its trajectory, but the environment only needs to determine the next state, but not the reward. Again, there are two nested optimization loops in the algorithm