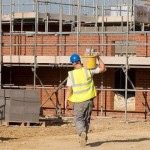 improvization and experimentation are typically regarded as friends of innovation, as they encourage us to test out new approaches and thinking.  a recent study suggests this might not always be the case however.

the study explored the behavior of small and medium sized spanish construction firms, and found that innovation was typically done via this experimental approach.

unfortunately, whilst this did indeed generate improvements, the innovations were often not shared with anyone, so were subsequently lost.

the spanish construction industry has been through a particularly tough time as a result of the financial crisis.  large firms have largely survived by diversifying to find new opportunities in international markets.

this kind of strategy is often much harder for smaller firms to mimic however, and the constant hunt for new contracts often results in firms taking a short-term perspective.

these challenging circumstances prompt many managers to focus their efforts on production planning and control, to the detriment of longer term tasks such as innovation.

the process of innovation

becoming better at capturing the innovations and improvements that do occur could represent a big advantage for smaller companies therefore.

“it was really interesting to get the sense that site managers are indeed conscious of the fact that they are being innovative, mainly to solve the problems that arise at the construction site or to satisfy client requests. these are technical improvements that occur from time to time and are born out of the necessity. their problem is a lack of time-in addition to a lack of recognition by company management-that holds them back from reflecting, recording and properly sharing those innovations”

the government has had a hand in changing matters by mandating that between 10-30% of public tenders should be focused on innovation, which has prompted a change in attitude.

the managers had a key role in communicating this importance throughout their organizations and introducing changes that helped to systemize innovation.

“by making simple modifications to some procedures, site managers were properly notified about troubleshooting cases that were likely to become a source of innovation,” the authors say. “this way, they received attention and support from the company’s central services in order to find the best solution, record it and properly share it.”

these systemic changes include having a department specifically devoted to innovation, or at least someone who can be said to be in charge of innovation.

given the limited resources many small companies suffer with, the authors suggest utilizing external support, whether that’s consultants or even crowdsourced support.

the authors go on to say that any improvements that are identified then need to be circulated throughout the ecosystem of suppliers, staff, subcontractors and even clients so that the results are sustained in the long-term.

suffice to say, the study itself was in a solitary industry, so i wouldn’t advocate carrying the conclusions automatically across sectors, but it does nonetheless highlight some of the challenges of innovating in small companies, and raises some possible solutions to those challenges.