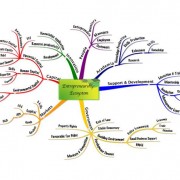 Humans have a hardwired sense for fair play and justice, so it’s probably natural to believe that the best technologies tend to be the ones that conquer the market and succeed.

Of course, reality is seldom so straightforward, and history is littered with examples of great technologies that fail to take off whilst seemingly inferior products rocket to mainstream success.

A recent paper set out to explore just why this happens. The researchers examined both the technologies themselves, but also the ecosystems in which they operated.

The researchers studied 10 different technologies that were introduced into the semiconductor lithography over a 40 year period to try and understand what contributed to market adoption.

They found that the ecosystem within which the technology sits is crucially important. So, for instance, electric cars rely on the creation of a charging ecosystem for it to take off, and a network of garages that are equipped to repair the vehicles.

So, in other words, for a new technology to come in and have a strong chance of success, it’s likely that a developed ecosystem would be required to support that growth.

This is a fundamental aspect of why sharing ideas and being open with your innovation is so important.  A study a few years ago from a team at the University of Buffalo looked at the pros and cons of giving up patent protection on a product.

It found that when we tightly protect our intellectual property, it has a big impact on the ecosystem surrounding your product, which then has a detrimental impact on your chances of success.

By contrast, when you’re open with your IP, you allow other people to build complimentary add-ons, and this makes the entire market or ecosystem much stronger, with the knock-on benefit for your own product.

So, if you want your innovation to succeed, it’s best to be open with it.