Long weekends are good. They need not be too long to be good. A workday off on a Friday makes a weekend a long weekend. Though it's just a single-day addition to the regular two-day weekend, the quantum of relaxation and creativity it brings is more than 33%.  You could go on a long drive to the beach and have fun. Rather than long drives and beaches, a programmer's idea of fun is to design and implement a mini-project outside of their work domain.

During one long weekend this year, occasioned due to the harvest festival Makar Sankranthi falling on Friday, the 14th of January, I ventured to program the task of finding the number of syllables in a word.

The most famous poetic pattern is the Iambic Pentameter. Shakespeare wrote most of his verses in it. To know what it is, we need to understand some terms, very clearly explained by Debora Schwartz [1] as:

Not just the iambic pentameter, but for all rhythmic poetry patterns, the basic unit to know is the syllable, which essentially is how many times you make vowel sounds when pronouncing a word.

What follows is a journal of what I did during my long weekend.

I spent Friday poking around the web and taking notes (this process is more fancifully called research).

There are some general rules for counting the number of syllables in a word.

My favorite programming language and framework is Ruby and Rails. With the discovery of the syllable-counting algorithm and code, my task became simple. I simply had to port the code from Python.

On the second day, I had LitTech fun. LitTech is my term for what data science calls NLP (natural language processing). I converted the extensive Python algorithm that I had Googled for counting syllables to Ruby. I quickly built up a Rails application around that algorithm and deployed it on my cloud server where I run my side projects. To test it out, I entered the words "Hyderabad Readers And Writers." It gave the syllable count as seen in the following screenshot. 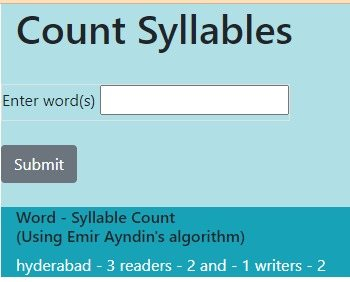 I had yet to verify the accuracy of my migrated Ruby algorithm. I planned to run some test cases on Sunday. I informed my literature club (HydRAW) members of my application.

Sunday, the third day of the Sankranthi weekend started dark, cloudy, and cool. But that did not deter me from LitTech fun. I played the soulful crooning of Manjari and Papon on YouTube continuously to get extra spirit nourishment. One of my book club members pointed out a discrepancy — "Hyderabad" is four syllables whereas my application was counting three.

Once the above functionality was done, I proceeded to find why the current algorithm was giving Hyderabad three syllables. Indeed, there was a check for the letter "y."

But I had goofed up twice in converting the code from Python to Ruby.

The second boo-boo was I missed an if condition. So, added it.

The interesting part is that Python enumerate over a list gives index and element whereas Ruby each_with_index gives it in the reverse order: element and index. So, for the main loop, I had to write | j, i | instead of | i, j |. The following three screenshots show the original Python code, my error Ruby code, and the fixed Ruby code.

Now the algorithm counted Hyderabad correctly as having four syllables.

I also added code to write words in a file whenever there is a discrepancy between the syllable count given by the self-algorithm and that from RapidAPI. I can use those words to check the algorithm and improve it.

The application is deployed on my side-projects server: https://www.mahboob.tech/poetry/
The source code is available in my GitHub repositories: https://github.com/mh-github/poetry