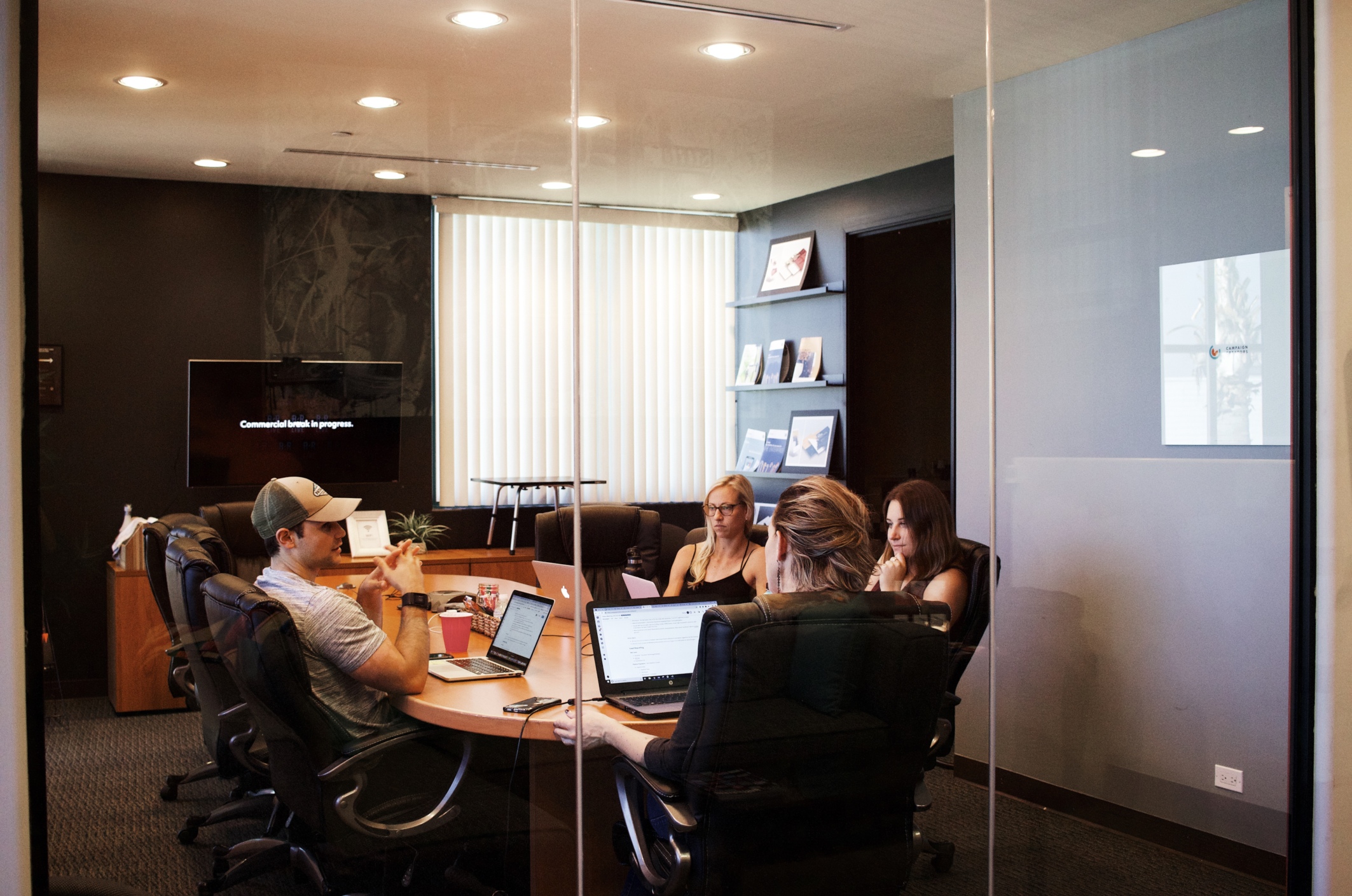 Systems thinking can help get your meetings back on track.

We judge others by what they do; we judge ourselves by our intentions."

Your organization has been disturbed by late launches in its last few new products, and now management has charged you with "getting to the bottom of the problem." You schedule a series of management team meetings with the goal of uncovering the source of the delays and redesigning the launch process to create on-time product releases. You now will have to commit to the entire team that you won't miss the deadline moving forward. Sound familiar?

Everyone wants to solve the problem by going deeper into its root cause. The first meeting begins with a "post-mortem" on the latest release crisis. The team members tackle the issue with enthusiasm, jumping in with their own perspectives of what went wrong and why. At first, the meeting seems to be going well, since everyone is obviously engaged in solving the problem. But as the meeting progresses, you start to feel like the group is spinning its wheels. The stories begin to resemble a jumble of personal anecdotes that share no common elements: "Well, in our team, we tried doing something new, and this is what happened..." or "This reminds me of the time when we implemented process Y and we were carrying spare parts in brown paper bags..." Lots of interesting stories are being exchanged, but they do not seem to be leading to a common understanding of the root causes.

The Trap & The Recovery

One way that leaders can move beyond event-level thinking to a deeper understanding of an issue is to use a modified version of the Vision Realization Matrix (see "Vision Deployment Matrix: A Framework for Large-Scale Change,"). Specifically, applying the first two columns of the matrix ("current reality" and "desired future reality") to a particular problem can provide a framework for both analyzing the current situation and designing an effective, long-term solution (see "From Events to Vision: Structured Problem-Solving").

The matrix distinguishes between different levels of seeing and understanding a situation. The "Events" level captures stories about specific incidents or events that indicate a problem. The next level, " Patterns," expands the time horizon. At this stage, the team might ask, "Are these individual events or stories part of a larger pattern that has been unfolding over time?" Next, the "Systemic Structures" level looks at the structures that might be producing the observed pattern of behavior. Since those systemic structures are usually physical manifestations of deeply held mental models in the organization, the "Mental Models" level prompts the team to surface them. Finally, at the "Vision" level, the group considers how the vision of what the organization is creating might be influencing those mental models. 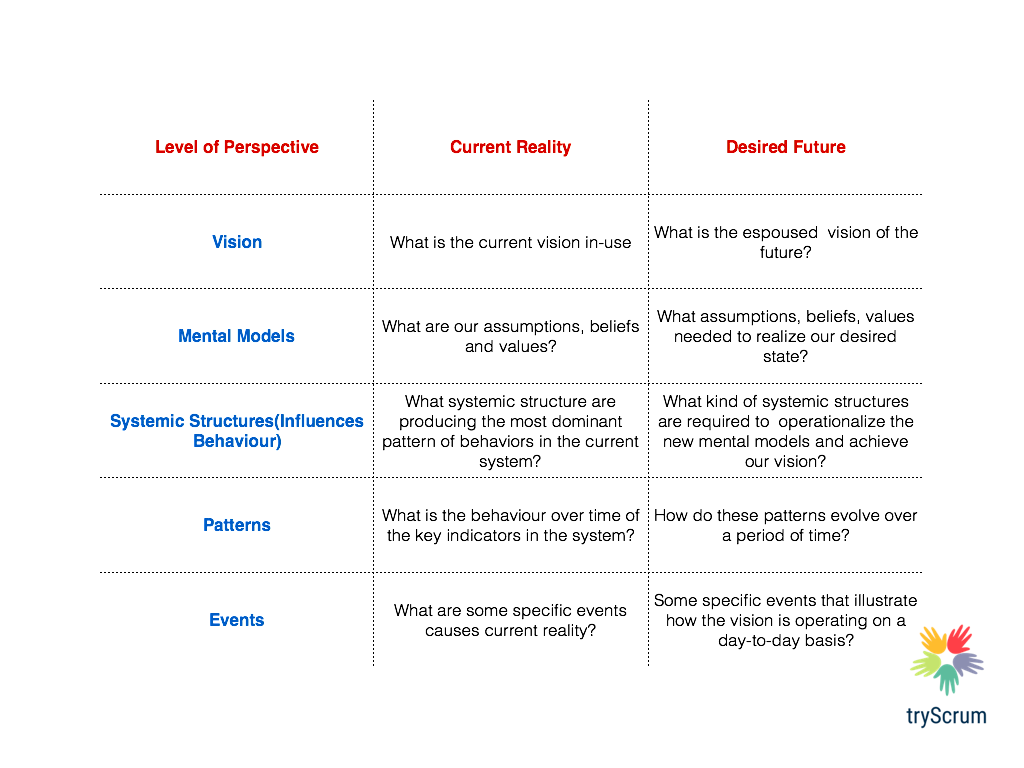 Analyzing a problem or situation from a systemic level (Multiple levels) can be useful in several ways. First, it forces us to go beyond event-level thinking, where our ability to affect the future is low, to a perspective that offers greater leverage for creating systemic change. Second, the matrix provides a way to distinguish between different ideas and experiences (e.g., "Does this story illustrate a problem situation or a prevalent mental model?"). Finally, when the conversation does jump from events to specific systems to assumptions and so on, the matrix can provide a coherent framework for mapping everyone's contribution in real time.

Using the Matrix to Optimize Globally

By filling in the matrix around a particular problem or issue, the team members can work together to raise their understanding from the level of events to patterns, systemic structures, mental models, and vision. For example, in the product launch situation, the team started with stories of a particular launch failure. After some discussion, the team discovered that the penetration tests for verification were never conducted. But instead of going further into the details of why that process was neglected, the team can ask questions designed to draw the stories up to the patterns level, such as, "Was this indicative of a pattern that happens with all products?" Additional stories can then be used to establish whether that is indeed a pattern. The teams can then identify potential patterns to group similar patterns.

The next step is to identify the underlying structures that may currently be responsible for such behavior.

In this example, the penetration test efforts all relied on a central group of people who were chronically overused by all the products under development, hence verifications were rarely done to the level specified. When the group tried to understand how engineers could justify skipping such an important step, they revealed an implicit mental model: "not knowing there is a problem and moving forward is better than knowing there is a problem and moving forward." In short, the division had been operating according to an "ignorance is bliss" strategy.

To understand where this assumption came from, the group asked, "What is the implicit vision driving the process?" The most common answer was "to minimize unwanted senior management attention." In other words, no one in product development wanted to have problems surface on their "watch."

Although this team focused on the "Current Reality" column, they could also fill out the "Desired Future Reality" column by asking what kinds of new structures might be needed to prevent these problems from happening in the future. 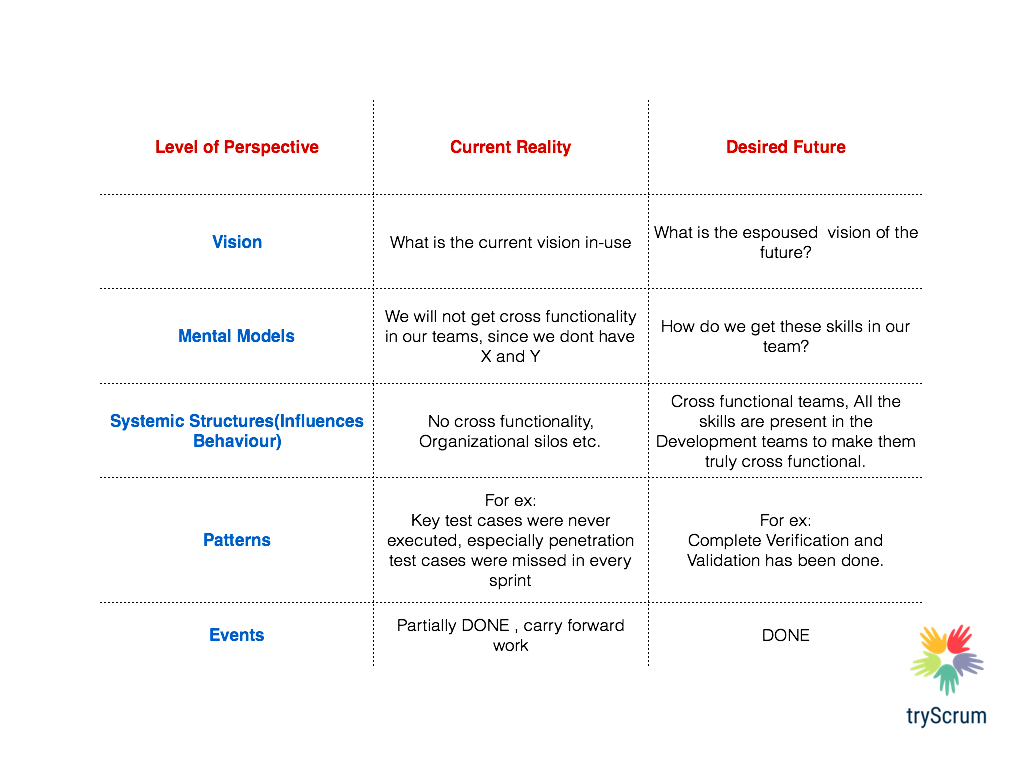 The following set of questions can be used to guide conversations as a team moves among the different levels of perspective. In looking at current reality, it may be easier to start at the level of events (since that is where stories usually begin) and work your way up the levels. When mapping out the desired future reality, however, it may be better to begin at the level of vision and go down to the other levels so that your desired future reality is not limited by the current reality. Having said that, it is likely that in actual meetings the conversation will bounce all over the place. The main point is to use the matrix to capture the conversation in a coherent framework.

By elevating the conversation from local thinking to systems thinking and beyond, this simple tool can help managers make clearer sense of their own experiences, and use those experiences to formulate more effective solutions to the problems at hand.

Our mission is to Humanize Organizations by going deeper to unlock prescience to challenge the established thinking and drive Transformation. We bring the right people together to build capabilities that enable Organizations to achieve sustainable transformation. tryScrum.com  brings great value to clients by building capabilities through our training, Coaching and consulting services.