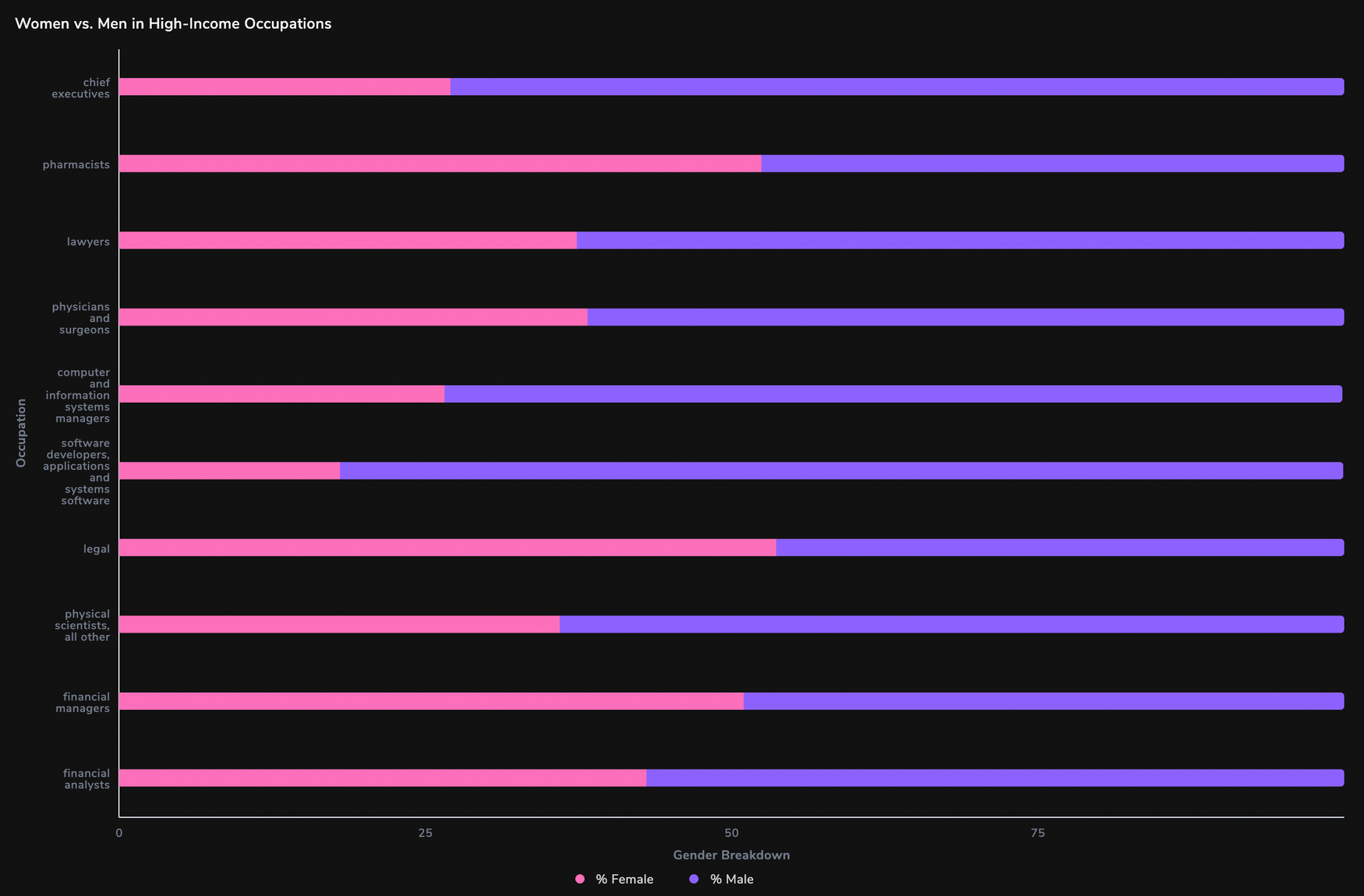 Chances are when you hear "0.77 cents on the dollar," an increasingly contentious subject — the gender pay gap — comes to mind.  Today, we will explore a US Bureau of Labor Statistics dataset containing information about America's workforce (as of Jan. 2015) to answer the following questions:

To answer these questions, we'll be importing the dataset mentioned above (available on Kaggle) into an Arctype SQLite database, where we'll use queries and dashboards to manipulate and interpret the data.

The dataset contains 558 instances (or rows) and seven attributes (or columns). Before moving on to statistics, we’ll need to load our dataset into Arctype. Arctype is an easy-to-use SQL client for PostgreSQL, MySQL, and SQLite. With Arctype, you can create tables and visualize the dataset without the hassle of coding.

To import a CSV file as a table, simply select ‘Tables’ within any workspace, and click the upload button, located with the other table controls:

After successfully importing the CSV data, a new tab containing the table will appear in your workspace. The Wage Gap dataset looks something like this:

Before we move on to data analysis, and to avoid discrepancies while performing a mathematical operation, we need to check our data for any null values, which can be performed using a variation of this query formula:

We now have 142 rows left—let’s add some new columns to our table that calculate basic statistics for our male-female comparison:

Adding new columns in SQLite is fairly simple.  Just plug in your table name, desired column name, data type, and a default value (if you want):

We will substitute the above query with the following values:

Note that in SQLite, we can add only one column at a time. The repetition is, therefore, necessary to add the remaining columns.

We have initially assigned a default value of NULL to all the new columns. Now, let’s populate these columns as per their formulas:

The CAST as FLOAT command is important because division would result in values less than 1. Since the default type for these columns is INTEGER or NUMBER, the new column would have 0 as their final rounded value.

Now, it's time to interpret our dataset using visualizations! Let's start by looking at occupations with the most equal and unequal incomes based on gender.

Comparing The Most Equal vs. Unequal Fields with Horizontal Bar Charts

The fields with a ratio closer to 1 can be seen as more equal fields, while a ratio value closer to 0 indicates a substantial discrepancy Using the SQL query below, we can sort the data in descending order to get the top 10 occupations with the highest proportion of female to male income:

Similarly, to get the most unbalanced fields, we can simply reverse the sorting order and get the top 10 results.

To compare the ratios side by side, let's create a couple of horizontal bar charts displaying these ratios. After running the query, select 'Chart' from the options at the top of the query window. A list of chart types will appear on the right side of the app:

Select the 'Horizontal Bar Chart' option and fill in the labels for X-axis and Y-axis. The resulting charts should look like this:

Note: we have multiplied f_share by 100 in order to output values as percentages rather than decimals.

We will use a horizontal bar chart for this query as well. Following the same procedure, and the final charts should look like this:

The fields in which women have the smallest share are not necessarily the fields with the most income. Therefore, looking at the problem with gender as a driving force — from this angle, at least — can be ambiguous and possibly misleading.

We can, however, draw a comparison between the share of both men and women in the most as well as least paying fields.

We will now extract both m_share and f_share in a single query and compare them for each occupation using a query like this:

Select the option of a Stacked Horizontal Bar Chart with f_share and m_share on the X-axis and occupation on the Y-axis. The resulting graphs are as follows:

We can see that the most paying fields are dominantly male-driven. The contrast is especially stark for occupations such as Chief Executives, Engineers, etc. While the situation is better in the least paying fields, in which women tend to represent a larger portion of the workforce, we can still notice that fields like Agriculture are heavily male-driven.  More importantly, however, female representation is (on the whole) higher as income decreases, which would indicate that the wage gap is in fact real.

We can also compare the average wages of men and women working in the same field against the overall average weekly income. This will give us some sense of whether or not the wages actually differ by gender.

First, let's extract the most paying fields sorted by the average weekly income in descending order:

Select Bar Chart from the Chart Menu. Set occupation as X-label while plotting Female, Male, and Overall on Y-axis. We should get the following output:

In this article, we explored the wage gap in America by comparing meaningful statistics such as weekly income, shares, etc. Using SQL and Arctype to conduct analysis, we've determined the most- and least- affected fields (see ‘Most Equal vs. Unequal Fields'). The corresponding bar graph shows that occupations like Wholesale and Healthcare enjoy a fair distribution of female to male workers. On the other hand, fields such as legal and finance are substantially more skewed.

However, our analysis also indicates that occupations with considerable gender imbalances — both predominantly female and male — do not necessarily correlate with the highest- and lowest-paying jobs (see ‘Female Representation in Different Occupations’).

Therefore, we instead looked into the gender breakdown by occupation, which helped us gain insight into whether the wage gap is equal across all industries. The stacked bar charts here (see 'Gender Breakdown in High- and Low-Income Occupations') clearly show a male-dominated atmosphere, especially in higher-paying fields. On the other hand, fields with lower wages such as cashiers and housekeeping are primarily female-driven. While the wage gap differs by industry, most of them still skew substantially towards males.

To answer the last question — regarding how income varies with gender — we extracted the overall average weekly income for each occupation, and then compared it with the male and female weekly income (see 'Comparing Average Incomes'). We could not help but notice that the female income is less than the average income in most — if not all — categories. Inevitably, male income exceeded that threshold by quite a margin.

The data here is clear: in a world where women comprise 49% of the population, we still have to work on inclusivity and our perception of gender — especially in the workforce.

Published at DZone with permission of Igor Bobriakov. See the original article here.