Okay, let's get down to it: There's nothing magical or unusual about protecting your organization's most-sensitive information by storing it on secure servers maintained in-house, while placing its less-sensitive data on secure servers maintained by a third party. This may sound simple, but managing such a hybrid setup is anything but. In fact, complexity increases exponentially when adopting a hybrid-cloud strategy, as Arthur Cole explains in a June 10, 2016, article on IT Business Edge.

All that flexibility and control made possible by hybrid-cloud systems comes at a steep price, according to Cole. While advanced operating systems and middleware can potentially remove some of the intricacies of designing, implementing, maintaining, and upgrading hybrid networks, companies are still left with the thorny choice of which management tools to use, whether to rely on proprietary solutions or go with open source, and last but not least, how to integrate the new system with your legacy data. 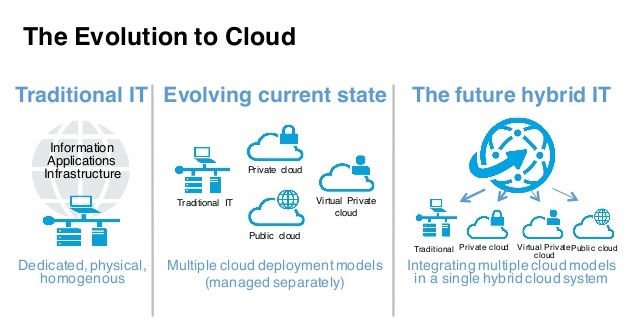 IT's transition continues from a dedicated, physical environment, to multiple clouds linked to in-house resources, and finally to a single hybrid-cloud environment. Source: James Bond

Matching a cloud-management system to your organization's unique data requirements gets no easier as the vendor options proliferate. Traditional providers, such as NetApp (ONTAP 9) and HPE (Cloud Suite on the OpenStack-based Helios platform) have been joined by the open-source Apache Mesosphere project backed by HPE and Microsoft, as well as NephoScale, offered by the folks behind the NephOS cloud operating system based on OpenStack Liberty.

The cloud-management platform choice gets even muddier as more cloud providers release their own management solutions tailored to the unique cloud infrastructures provisioned by their enterprise customers. What such single-service offerings lack, obviously, is support for multi-vendor cloud operations. Before you know it, your data could be back in the silo you've been working so hard to liberate it from.

Outsource the Infrastructure to Focus on IT's Human Capital

The overarching benefit of software-defined architectures is that they free IT from the hardware limitations of the past. Now the only limit to what your organization can accomplish is the talents and imagination of your team. This refocuses IT on the human side of management, as Kristen Knapp writes in a June 2016 article on Tech Target. The flexibility that is the hybrid cloud's claim to fame also presents one of the technology's thorniest management issues: Which workloads go on the public cloud, and which belong on the private cloud?

For financial and healthcare industries, the choice is often determined by compliance requirements. Yet public-cloud services now support the governance and compliance standards these industries must meet, according to a cloud consultant quoted by Knapp. Still, to facilitate auditing, the trend continues to separate workloads based on compliance needs.

The public cloud/private cloud choice is often determined by the age of the application. Legacy apps may simply be too expensive to adapt to the public cloud, particularly because they tend to be bloated resource hogs compared to their leaner, more-efficient cloud-native counterparts.

The Real Work Begins With Your Hybrid-Integration Plan

Once you've selected your platform and management tools, and determined which workloads go public and which stay private, it's time to apply the glue that will keep all the components operating as a single well-oiled machine. The key to putting the pieces together nicely and neatly is careful implementation of RESTful APIs and similar application-integration methods.

Your data-traffic patterns are going to affect your apps' performance and resiliency. This is where multipathing comes into play. By creating multiple paths for data to travel between hybrid-network environments, you can improve load balancing and reduce latency. In many cases, it makes financial sense to establish a direct connection between the public and private sides of your hybrid cloud, such as AWS' Direct Connect and Microsoft Azure's ExpressRoute (many third-party connectors are available as well).

More Provider Options Than Ever: Which Is Best for You?

As companies come to rely on cloud services for more of their IT operations, the nature of the provider side of the equation is going through big transitions of its own. A recent Forrester report titled Hybrid Cloud Management Solutions of Major Service Providers found that solutions for managing assets in hybrid-cloud environments are offered by independent software vendors, traditional service companies, and open-source communities. IT Wire's Peter Dinham writes about the Forrester study in a June 1, 2016, article.

That makes finding the best provider for your organization's needs more challenging. As service providers develop their own IP assets, comparing various offerings becomes more complex. In addition, the technology is changing so quickly that the relationships between the components of any hybrid-cloud integration are not well established. You won't find many standards for managing hybrid clouds, either. 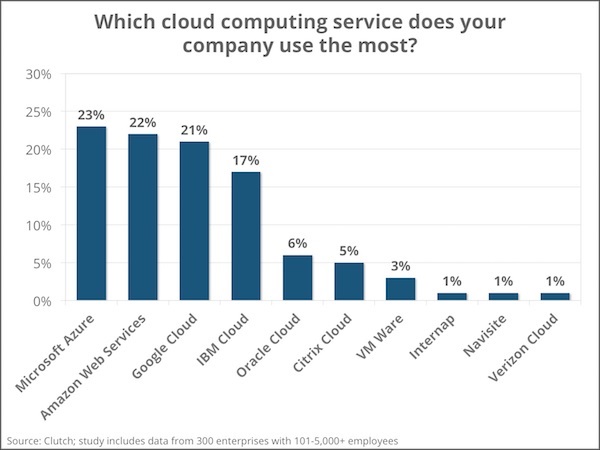 As cloud service providers focus increasingly on their own IP, the distinctions between providers and software vendors disappear. According to the Forrester findings, clients want to be free of having to manage the increasing complexity of software and expect providers to bring their own IP assets to do much of the managing for them.

The Forrester report concludes that software vendors have been slow to offer the features their hybrid-cloud customers need, yet brokering services haven't shown they can deliver the performance and functionality required to keep hybrid cloud setups running smoothly and efficiently.