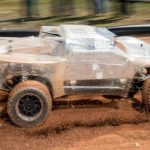 driverless technology has undoubtedly made huge strides in recent years, but the impression remains that they are still only capable of functioning on very well mapped roads in good light and weather conditions.

taking the cars off-road, therefore, presents a significant challenge. it’s a challenge that a team from georgia institute of technology have taken on, though, as they attempt to devise means by which driverless cars can maintain control under conditions that would test even the best handlers.

the team set out to push the limits of what the cars can do by racing and sliding smaller (1/5th) cars at around 90mph.  their approach for retaining control includes the use of algorithms and onboard computing that allow stability to be maintained whilst keeping high performance levels.

“an autonomous vehicle should be able to handle any condition, not just drive on the highway under normal conditions,” the team say. “one of our principal goals is to infuse some of the expert techniques of human drivers into the brains of these autonomous vehicles.”

the project is interesting because driverless cars today make no real distinction between normal terrain and unsteady terrain.  as such, the team believes that their predictive path integral control can offer a more dynamic approach to keeping cars safe.

“aggressive driving in a robotic vehicle — maneuvering at the edge — is a unique control problem involving a highly complex system,” the team continue. “however, by merging statistical physics with control theory, and utilizing leading-edge computation, we can create a new perspective, a new framework, for control of autonomous systems.”

the method was based on a path-integral approach to create the algorithm with statistical models then used to chart the most stable path in a range of different environments.

each car comes with a high powered gpu, and the algorithm computes in real time the data coming in from gps and the various sensors kitted to the car, before then relaying the correct handling decision to the vehicle.

as you can imagine, it’s a hugely complex task, and the team believes they’re the first to successfully undertake it in real-time. the onboard gpu lets the algorithm sample more than 2,500, 2.5-second-long trajectories in under 1/60 of a second.

the key to the system is its ability to understand the concept of cost. the algorithm attempts to match up several cost components to ensure the car achieves optimal performance. these costs tend to come into three main areas:

this approach is invaluable because it allows speed to maintained despite control being optimized.  it’s a balancing act that can be difficult to maintain, but the team believes they have made good progress.

“what we’re talking about here is using the mppi algorithm to achieve relative entropy minimization — and adjusting costs in the most effective way is a big part of that,” they conclude. “to achieve the optimal combination of control and performance in an autonomous vehicle is definitely a non-trivial problem.”

with manufacturers predicting driverless cars may be on the roads within five years, this kind of progress will be crucial to achieving that ambitious target.  you can check out the car in action via the video below.