Just as in human conversations, users assume your bot will remember what they recently have been talking about. Here, you’ll learn how to make your bot remember information from one flow to another. Consider the following conversation:

This conversation combines two flows: ‘User wants bot to suggest a coffee’ and ‘User wants to order a coffee’. In the first flow, the bot recommends a ‘flat white’. This coffee type is remembered, so when the second flow is triggered, and the user asks for “one of those”, the bot understands that a ‘flat white’ should be ordered. In other words, ‘flat white’ is mentioned in one flow, and then used in another.

We will take the following steps to make this possibe:

Once we are done, the ‘User wants to order a coffee’ flow will look like this: 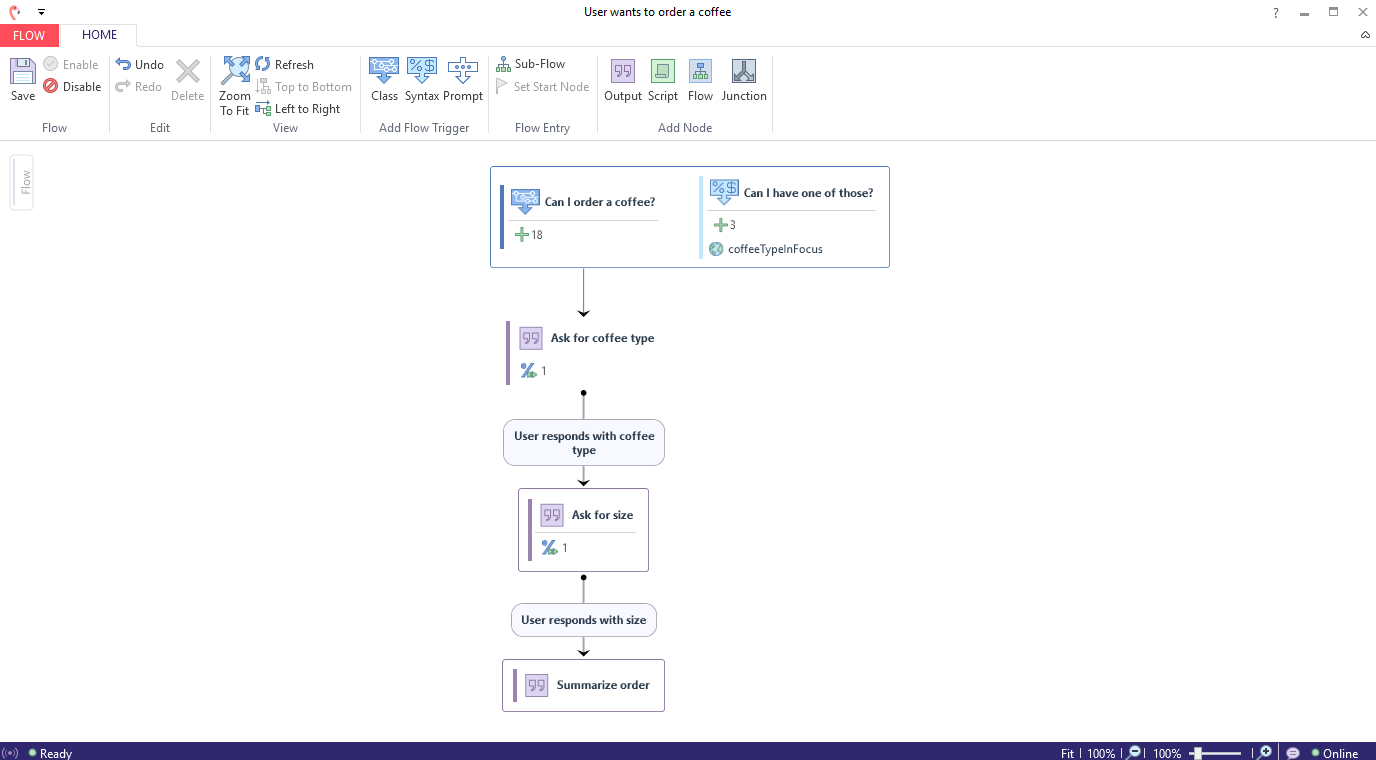 We now have global variable that we can use to store a coffee type, which can in turn be used by other flows when needed.

Update the ‘User wants bot to suggest a coffee’ Flow

Now we’ll make sure that the coffee that is recommended in the flow ‘User wants bot to suggest a coffee’ is stored in the global variable so that it can be retrieved from other flows too. The flow uses a flow variable coffeeSuggestion that needs to be copied to the global variable coffeeTypeInFocus. To do so we’ll add a script to the flow’s ‘On Drop’ script event. Scripts in ‘On Drop’ are executed when the flow has finished and is about to be dropped from the flow stack.

In the script, we’ll first set the global variable coffeeTypeInFocus to the value of the flow variable coffeeSuggestion. However, we don’t want the coffee type to be remembered forever. Just as humans don’t keep things in focus forever, so shouldn’t your bot. Once the variable is set, we’ll use a special method to specify that the value should be forgotten after a couple of turns (input-output turns). In Teneo that is called setting the lifespan of a variable. You set the lifespan of a variable with a script like the following:

We’ve come quite far already. We’ve set up a global variable that makes it possible to share information between flows, and made sure it’s populated whenever your bot suggests a coffee type. Now we’ll move on to retrieve and use the variable from within the flow ‘User wants to order a coffee’.

But first we need to make sure that the flow triggers on inputs like “I’ll go for one of those then”. This should only happen when there is a coffeeTypeInFocus. The new trigger will thus include a context restriction stating that the global variable must carry a value for the trigger to be applied. Now let’s create the trigger:

These are the steps to set it up:

An attached script is executed whenever the condition it is attached to has matched the input. The flow variable orderedCoffeeType will thus be set to the value of coffeeTypeInFocus whenever the condition evaluates to true, and our new trigger kicks in. And of course, we will then skip the question “what coffee type do you want” as we already know, and go straight to ask the size.

That’s it! Now go ahead and give it a try in try out!