When you start in the world of mobility and the development of mobile technologies, everyone thinks of Android and iOS. The first thing, almost always, is to go to native development, and therefore we all start doing Android apps in Java with Android Studio, or if we have a Mac, we start with Swift/Objective C with XCode. Then we begin to get into it and we learn that it is not only reduced to making native apps, which begins our incursion into the hybrid world.

So, how is the scenario today? Let's talk a little bit about the subject.

Some years ago, after the beginning of the era of smartphones and smart devices, to put it generally, there were leading technologies of development: Objective C, Java, and in the world of hybrids, PhoneGap, a competitor who later lost ground for performance problems in some scenarios.

As development trends moved more and more towards mobility, the technologies evolved. For development in iOS, the evolution was Swift. In Android, Kotlin was born recently, empowering the JVM even more.

To this author's consideration, the greatest evolution has not been in the field of mobility previously mentioned, but in the entry into the game of new actors such as Xamarin, React Native, and NativeScript.

Beyond the technologies themselves to develop mobile apps, we can identify four models:

In The NativeScript Book, we find this graphic that clearly illustrates how each of these development models is executed: 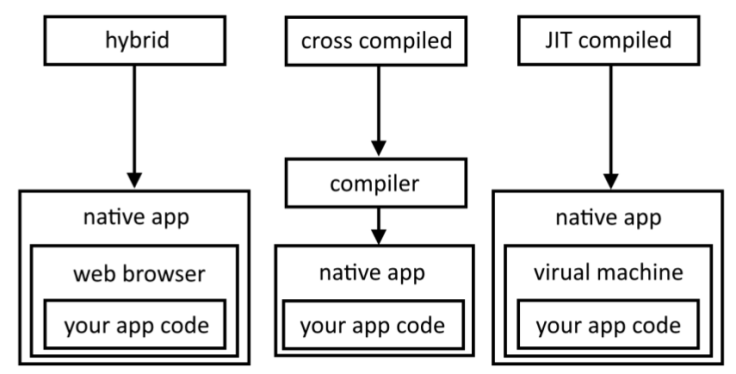 What Model Should We Use, Then?

I think there is no model that is better than another, however, there are some suggestions that I would like to share:

I do not believe that there is one technology that is better than another, but the accelerated growth that the JavaScript world is having points to it becoming one of those technologies to which the mobile world will move. I have tried many of these technologies and it is my personal evaluation- and it does not have to coincide with the rest- that React Native is currently the technology that has a better balance between speed of development (with finished components such as NativeBase, Shoutem, or NachosUI), performance far superior to the applications that run with Cordova/PhoneGap, an active community, and access to hardware functions compared to the characteristics of native development.