a year ago we wrote a number of articles devoted to the psd-to-html/css conversion market. it's a good time now to analyze changes in the design-to-html field: what's new, what tendencies have a positive or negative impact on customers. 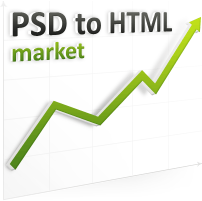 definitely the psd-to-html/css conversion market has become more mature during the past year.

along with a group of relatively large providers there is a number of small companies, start-ups and freelancers who offer psd-to-xhtml/css conversion in different price segments and with various options. companies which specialize in narrow niches such as psd-to-wordpress, psd-to-drupal, psd-to-joomla, etc. have also grown. on the whole, the past year indicated more intense rivalry in the market.

a market-specific production model has crystallized. the main promises given by the market are a) fast, b) w3c-validated and c) cost-effective psd-to-html conversion. this means that the provider should have a seasoned client service department which works in a very close marriage with production. html/css coders involved should be good trained, know the latest web-industry standards and be able to work quickly and flawlessly. strong project management and reliable testing and qa complete the image of an effective psd-to-html company.

psd-to-html conversion services proved to be a trustworthy assistant for designers. the most flexible cooperation model is when the designer is familiar with at least the basics of xhtml/css and can make minor "last minute" changes and tuning in a markup (such as "move this 2px left", "make that word written in bold", etc.). several market-dedicated web resources have emerged. among them there is above mentioned psdtohtmlcompanies.com, as well as bestpsdtohtml.com which successfully aspire to be a "one-stop-shop for any information related to psd to xhtml conversion and css services." last but not least: in google the number of search results for requests with core market keywords has increased in several times that also indicates a growing popularity and maturity.

the problem of choice

the reverse side of a strong supply is the problem of choice. to some extent it can be considered as one of the negative aspects of the modern psd-to-html/css market because sometimes to select a provider takes much more time than to convert a design into xhtml/css code. our recommendations given in the article "how to convert psd to html - the best option" a year ago can be still helpful.

summarizing the results of the last year, it is worth pointing out the following.

the psd-to-html companies have supported proliferation of the latest web standards and website cross-browserability - and consequently helped to make the internet more unified, accessible, and easy to search, i.e. more effective and useful for all of us. at the same time the psd-to-html/css conversion market is still on a relatively active phase of its development and new exciting changes may be expected in the nearest future.