It's been a decade in Quality Engineering and Test Automation, and my observation has been that visibility is generally missing when it comes to Test Automation. Yes! You heard it right. Visibility!

It is often the case that the technical aspects do not matter much, as much as the non-technical ones.

At times, I even got a feeling that Test Automation was becoming the responsibility of only the QAs when every member of the team is responsible for the Quality aspect. And the reason for that was also missing visibility of Test Automation at times. Since you don’t see what's going on on a day to day basis, you don’t hold yourself responsible for it. And, at times, don’t see much of value in it as well.

Out of Sight, Out of Mind.

Visibility of automation is not only important for Quality Analysts or Test automation engineers but for every member of the Scrum team, i.e. BAs, Devs, UX Designers, Product Owners, Product Managers, and Business Stakeholders. Test automation metrics are direct indicators of the health of the product and hence hold a very high significance. Metrics help in making effective decisions.

The first Test Automation dashboard I had created was exactly a decade ago using JSPs and MySQL. After that, I used Spring Boot, MySQL, and a UI framework from time to time. But, with the rise of Node.js and the mammoth rate at which JS frameworks are coming up, this time I thought of exploring something beyond the traditional stack.

As I was exploring various options, something that grabbed my attention was Cube.js. I looked at some of the examples on the Cube.js website. Looking at the live demos, I realized that this is what I was looking for. I had a quick glance at the documentation and found it to be neatly organized, detailed, and well done. I joined the Slack channel to see how the support is and it was pretty good. Almost all questions were answered with a decent turn around time. In myy personal experience , I asked two questions on the Slack channel and both were resolved within minutes.

So, to be precise, what Cube.js needs from its user is a solid understanding of your database. And it does the heavy lifting in terms of wiring or chaining the components. A bit of plumbing gets the show up and running in a few hours or less. In less than two days I created this Test Automation Dashboard. The database that I have used is MySQL. The database schema is as in the snapshot below. 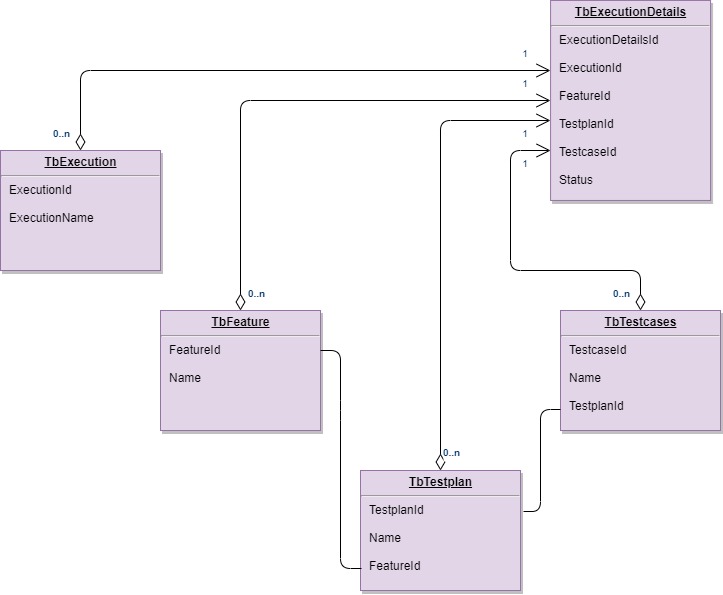 Let us have a look at each of these tables:

One of the basic things about this entire set up of MySQL and Cube.js is that it is test automation framework agnostic. Meaning, irrespective of you using TestNG-Selenium or TestNG-RestAssured or Jasmine-Protractor or Mocha-SuperTest or any other framework of your choice, all you have to focus on is updating the MySQL database after the test automation has run. As long as the underlying language used for test automation is able to connect to the MySQL database and update the results post-execution, the desired charts/metric will be displayed by Cube.js. 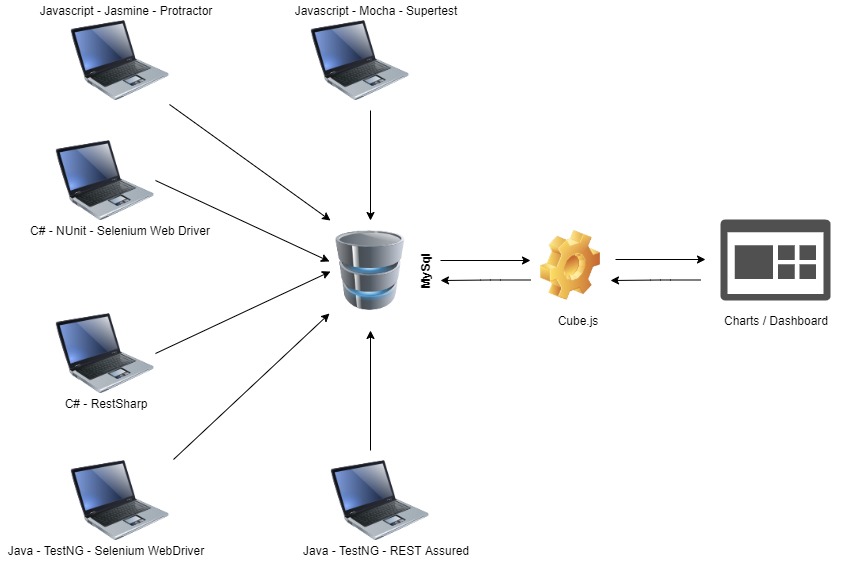 The goal behind creating this test automation dashboard is to answer some of the questions regarding the overall test coverage. Questions like:

In the cloned git repository you'll see an additional folder — mysql-schema — which holds the MySQL database schema. That is the sample test data along with the database schema that we will be using to generate the charts as in the snapshot above.

a. Node.js and npm 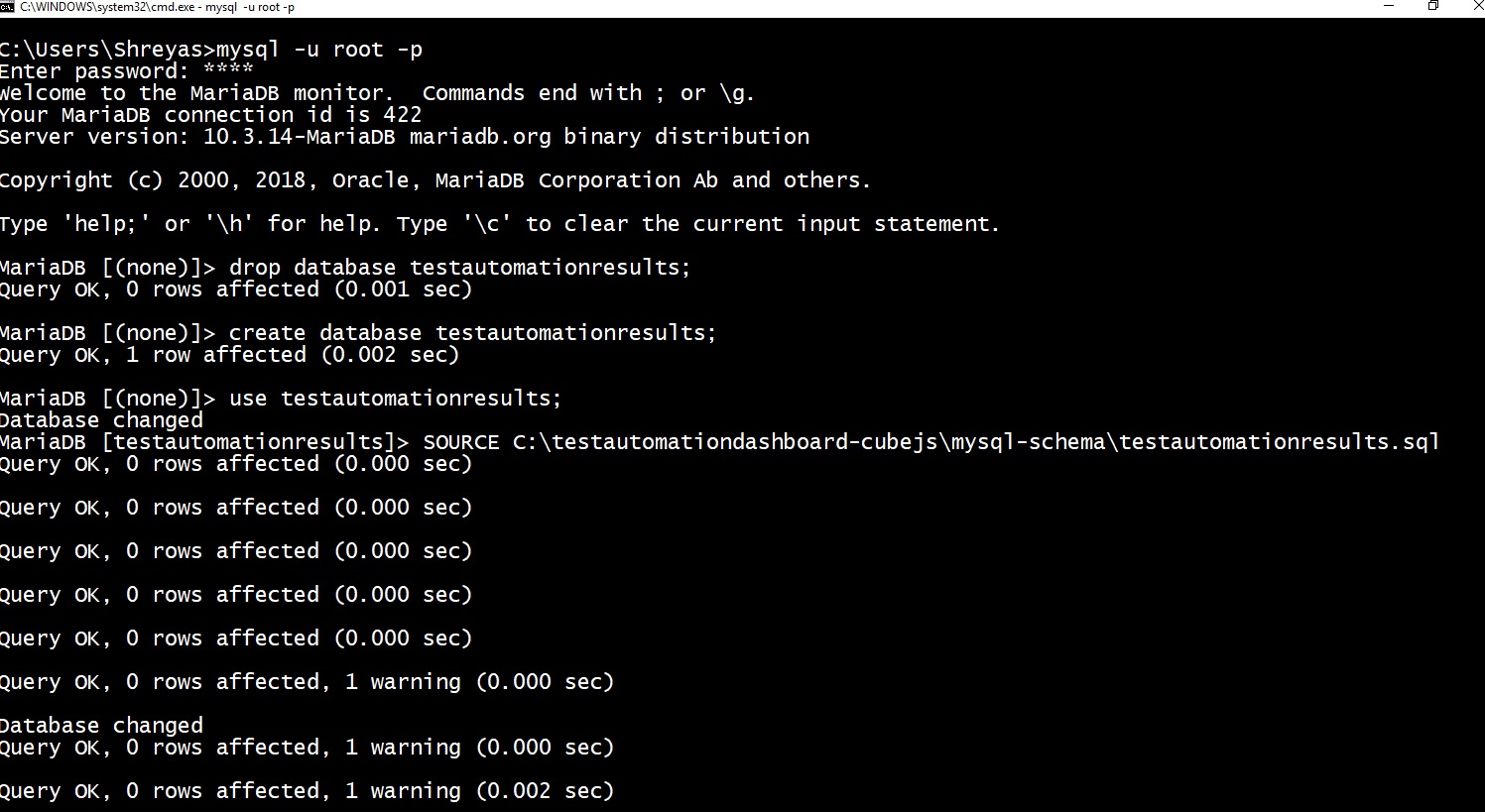 Step 3: Git clone the repository using the command below:

Edit the “.env” with the appropriate MySQL details :

As in the cmd above, open the URL: “http://localhost:4000”. The evelopment environment, as shown below, will be displayed.

For further exploring this development environment, refer to the document on the Cube.js website.

Running the commands below will generate a “build” folder in “dashboard-app”. 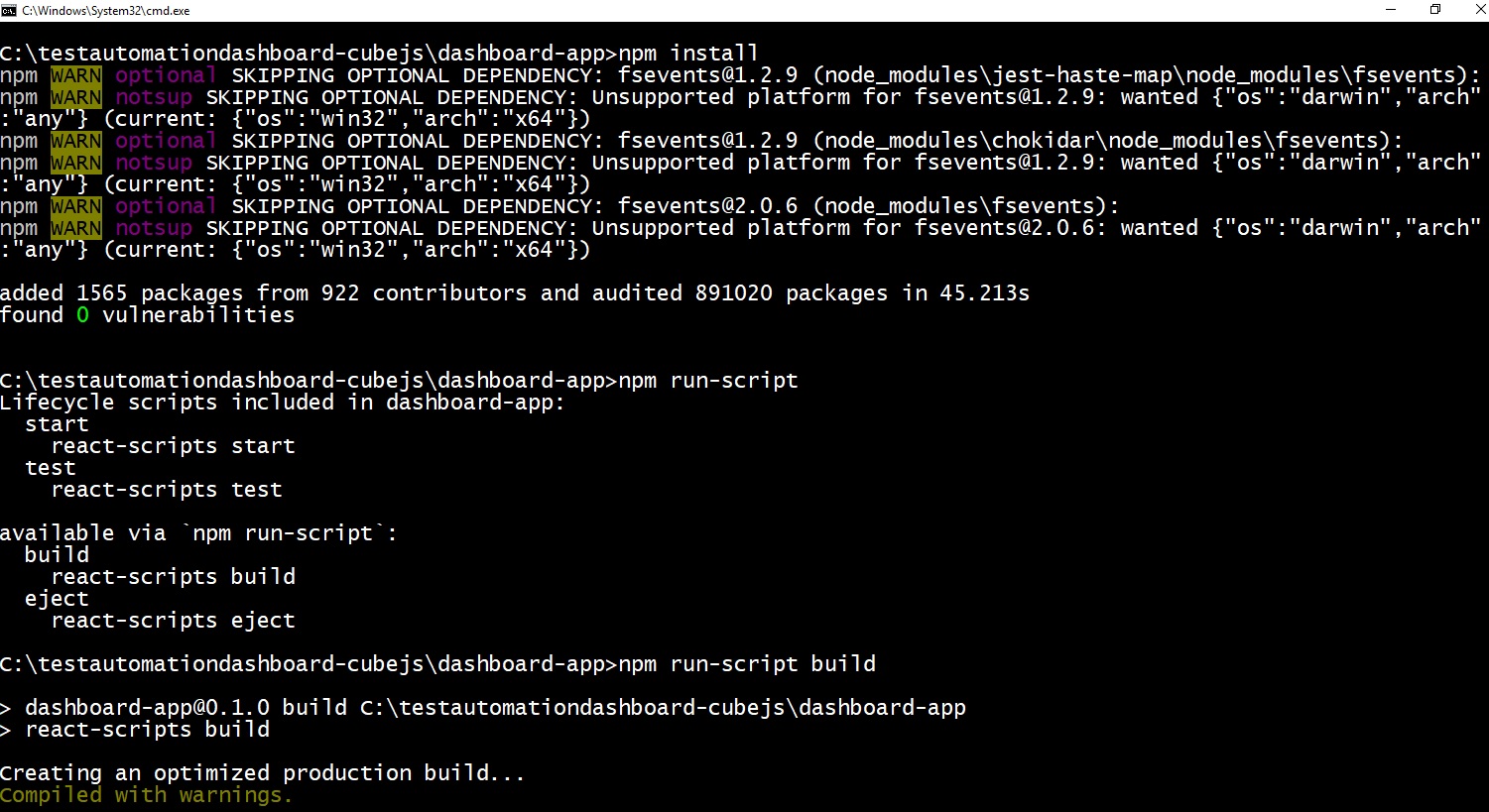 Step 7: Copy the generated “build” folder to any other directory.

Step 8: Click on any of the URLs listed. the Test Automation Dashboard should be up and running. 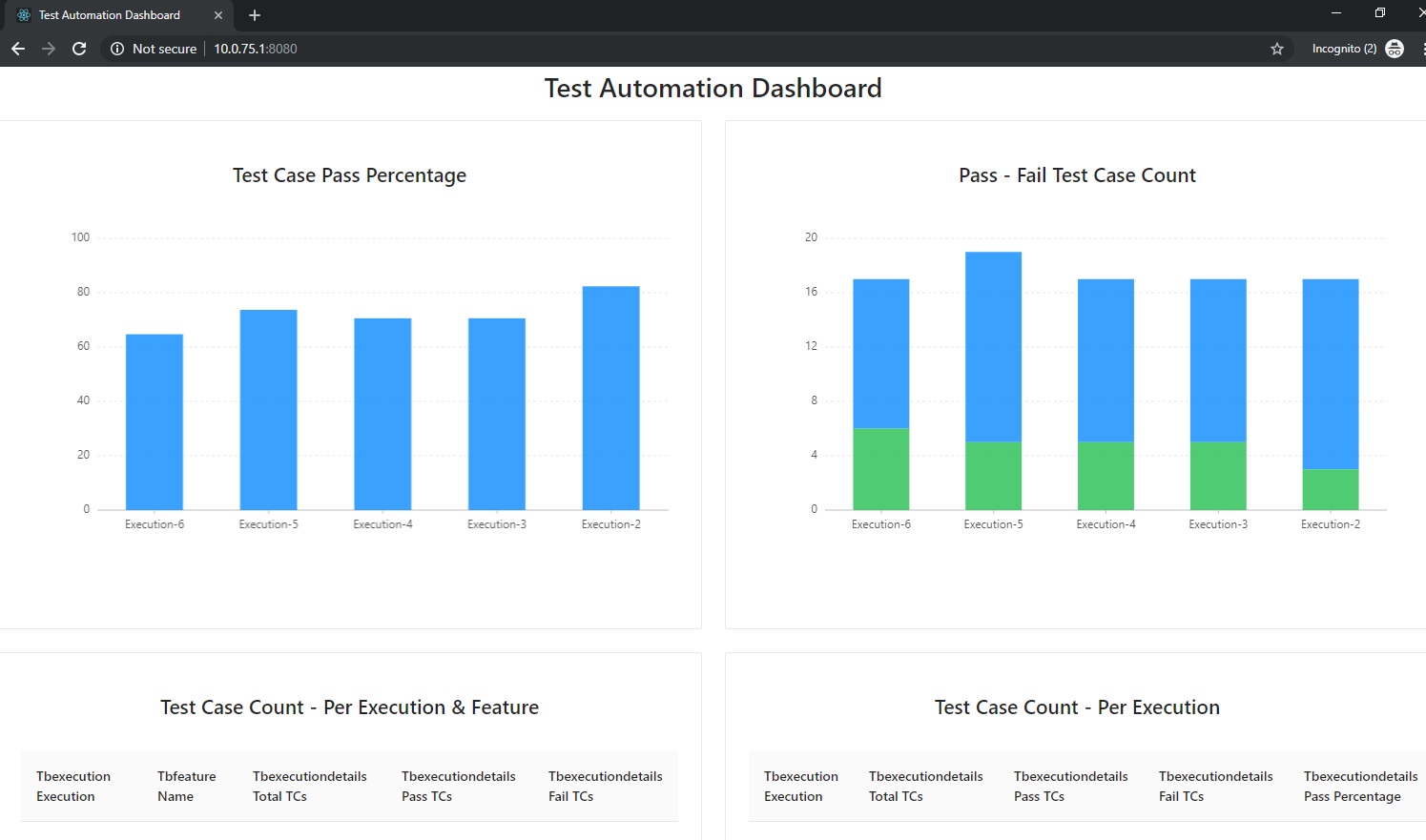 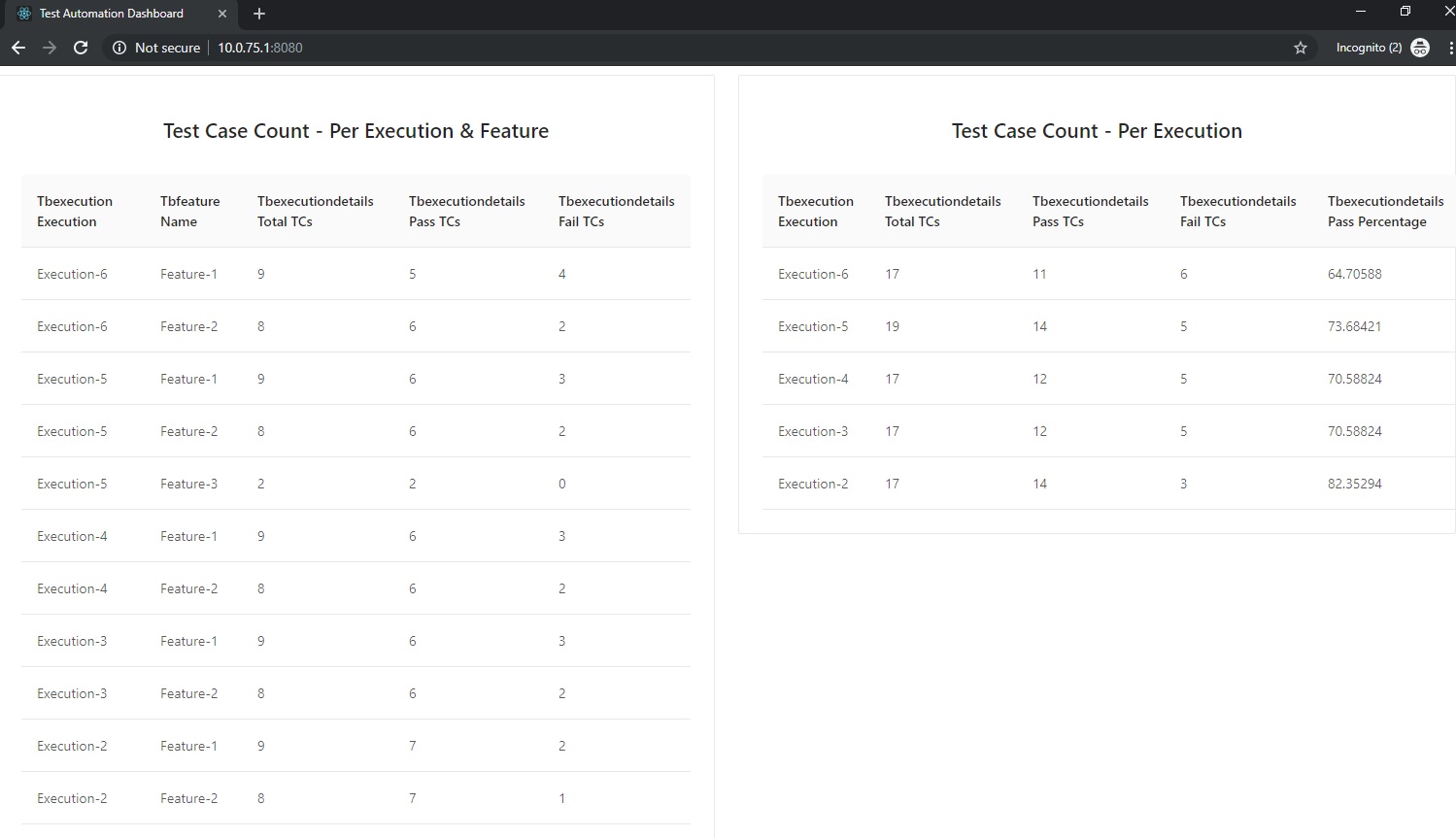 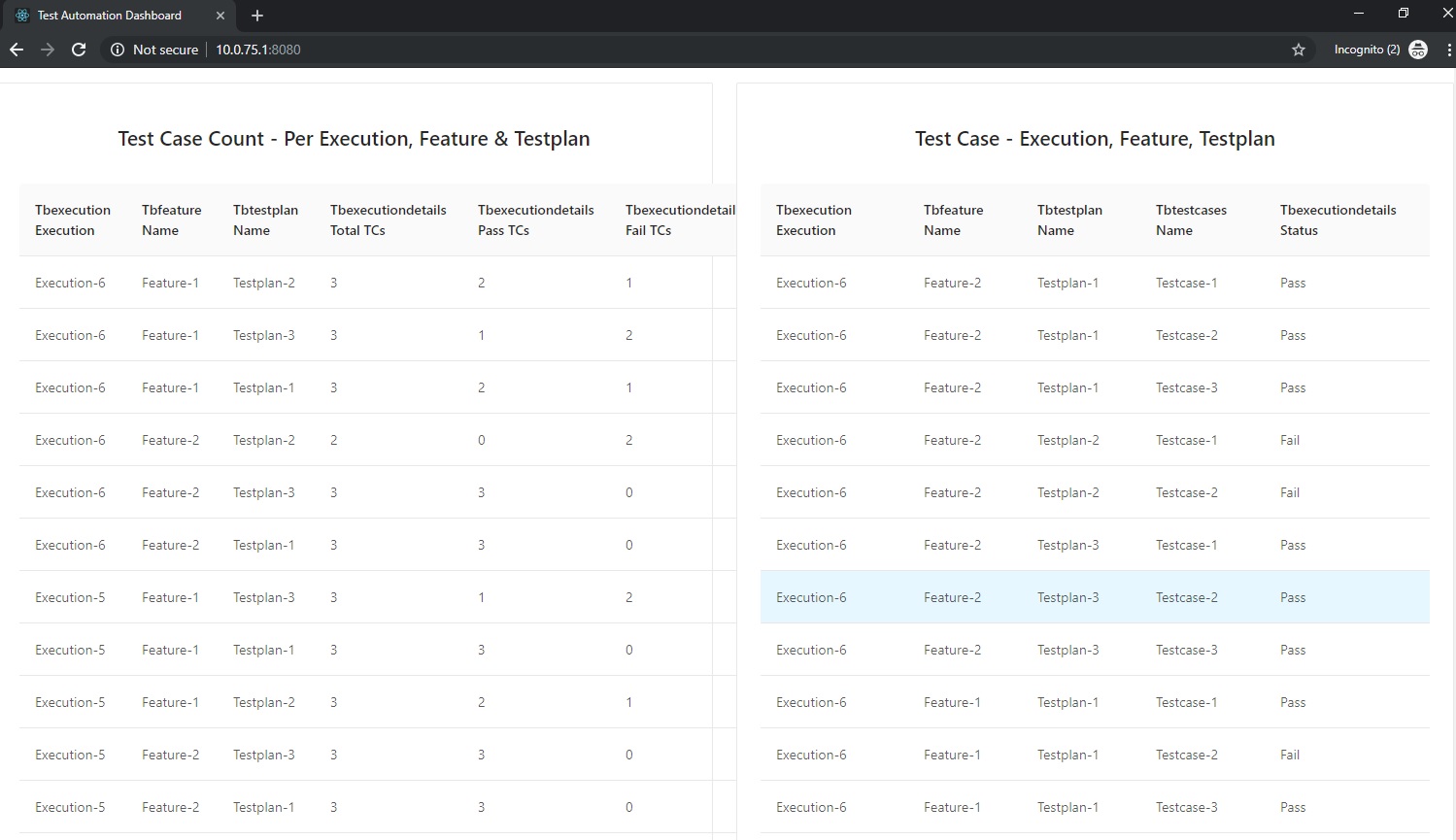 The git repository here can be cloned to use (as is), updated, or enhanced with the Test Automation Analytics Dashboard using Cube.js.