in the previous sections we learned how to create a simple java program and tested it. we mainly did procedural programming , while now we will learn how to better encapsulate functionality and data with the help of object oriented programming ( oop ). the aim of oop is mainly to provide better code re-use than it would be the case with procedural programming. with oop it is easier to write large software and personally i think, it leads to better readable code.

a nice introduction to oop with java could be given via:

an object is a self-contained entity which has its own collection of properties (ie. data) and methods (ie. operations) that encapsulate functionality into a reusable and dynamically loaded structure. after a class definition has been created as a prototype, it can be used as a template for creating new subclasses (via extends keyword) that a dd functionality. … applications can request new objects of a particular class on demand via the new keyword.

what you will learn in this section:

so check out the previous example at the following url with subversion:

open it in your favourite ide and we will now apply some necessary refactorings (code changes) to transform a procedural program into a more object oriented one.

what is refactoring ? code refactoring means code changes, which have the aim to make the code better readable or introduce a cleaner design. but refactoring does not change how the applications works.

first: let us get rid of the static keyword :

we should have added a test case before some code. so here it is:

(a good but not ideal comparison of class/object in the real world: a class could be compared to a rubber stamp and an object to the resulting images on the paper.)

additionally we should change the public access of the x and y variable. what does access mean? we learned in the previous post that we can use variables like x only in its block and sub-blocks, where it was defined. now we used public before the variable declaration so that we can access (or ’see’) the variable from all external code, which is called world in the following table. a short overview of this can be given:

this table was taken from sun , where you can get more information about this topic.

and even initialize y:

so, just make all variables private and provide public methods to manage initialization and retrieval of such a variable via setter and getter. instead ‘public int x;’ you should do:

now you can simply remove the setx method and ‘external code’ is not able to change x without the appropriate move method.

now we are near the finish of refactoring so check out the code of this third section to compare your refactored code with my code:

more details on subversion was given in the second section .

to compare the files go to the projects window and select both files (hold ctrl). then right-click->tools->diff 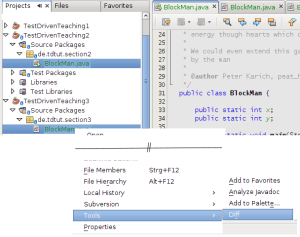 you will notice that i introduced two methods too: movex and movey to make our class easier to use. also the border values could be now accessed from outside via getborderx and getbordery

in the unit tests of the third example

the following things will be further explained: