Welcome back to Testing N1QL! If you're just getting in, check out part one, part two, part three, and part four. Now that you're familiar with MySQL's RQG, let's take a look at the execution environment.

Our test case assumes that we have MySQL and the Python connector for MySQL installed on the machine where we want to run our test framework: testrunner. Links to our GitHub repository of testrunner are provided below. The test case can run for single or multiple tables in MySQL. Since it is hard to store expected results for millions of queries, we want to compute it on the fly. This requires the installation of MySQL.

The test creates the database in MySQL as specified by the database schema. MySQL tables get created and data is populated. Various data types considered here are Datetime, String, Numeric, Boolean.

We vary the number of queries  to be generated for our testing purposes as below:

Though there is no limitation, we validate up to 550K queries. 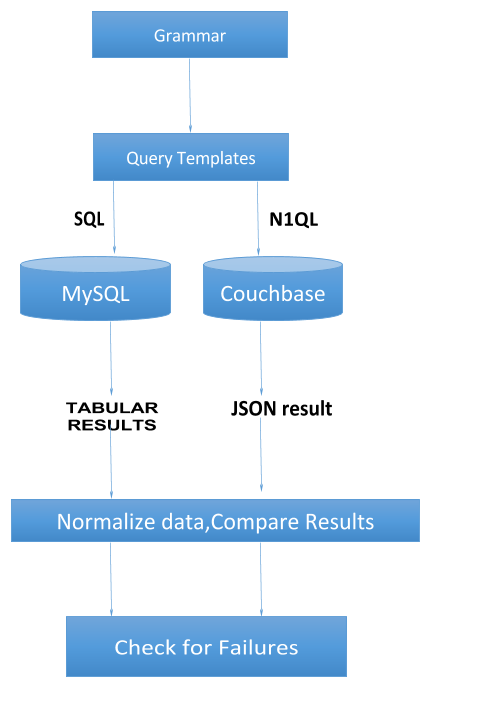 The figure above gives us an idea of how we compare actual JSON results generated by N1QL queries with expected results from SQL queries after inserting the exact same data in both a MySQL database and Couchbase buckets — then running the same queries respectively.

What Is the Meaning of Normalization Here?

We add an order by clause in the respective SQL and N1QL query so that results are ordered based on the key, and then we compare them.

First, we compare the lengths of actual and expected results. Then we convert SQL results to JSON and compare them with N1QL JSON results.

For tests with multiple indexes, we specify N1QL queries without index hints and see if the correct index is being used in explain clause.

The difference in results is displayed very clearly for debugging purposes as shown below.

There is an AssertionError giving an analysis of pass percentage, total queries run, and distribution of failure.

Example of results from a failed run:

In this example, 0% mentioned with keywords in [ KEYWORD FAILURE DISTRIBUTION ] indicates that N1QL queries with these keywords gave correct results while those with the NOT keyword gave in 1% of results different results from SQL queries. This is how we identify the pattern where failures occurred.

The test also displays the exact SQL and N1QL query, which gave different results in the end.

Example of Results From a Successful Run

This helps the QE and developers to analyze the differences and figure out the reason for incorrect results in an efficient way.

We caught a lot of bugs related to incorrect results in N1QL last year using our rqg testrunner framework.

The following table shows some of the bugs caught by this RQG framework:

This bug shows how QE daily RQG run caught the regression which was introduced as part of our N1QL optimizations.

The following queries gave different results, and the mismatch in results shows the expected results from a particular SQL query and actual results from the same n1ql query.

Dev could identify the patterns in the queries where we saw the mismatch and fix the issue quickly.

Advantages of This Framework

The main advantage of this framework is to catch regressions in N1QL, since the random field combinations are not picked by functional or unit tests. When developers change N1QL code, they can be at ease as most of the issues will be immediately caught by RQG.

If you want to install RQG on your system,here are the instructions:

If you have any feedback or questions on this article, please email me at prerna.manaktala@couchbase.com