Testing in the right environment is always a challenge. When building an application, a developer can't be sure that the test environment (for example, Jenkins machine) is using the same version of node with the same configurations as in production.

Docker introduced the option to package the application so the environment is part of the deployed application. In this article, I will show how to take advantage of the Docker image layering model in order to run unit tests or component tests within a Docker container without polluting the production software with test code, data, or configuration.

We will use a node.js and express application and build a Docker image for production. Then, we will build another Docker image from the production image as a base image, add the test code, and run a container from this test image.

The article assumes basic knowledge in Docker and node.js.

The source code for this article can be found here, and it can be cloned using this command:

For this article, we will build a simple HTTP calculator  server. The server responses to the following APIs:

Each one of these API requires two query parameters: first and second. For example,

will return a JSON object of:

The Git repository includes the test.js file under the tests folder. The tests use the supertest library and run using mocha.

There are two Dockerfiles in the Git repository. The first one is the Dockerfile for the production image, named "Dockerfle.production":

We'll use the following command (including the . at the end) in order to build this image, and name the new image "calculator":

Now, we have a non-tested image for production. It can be run, but first, let's test it.

To do that, we will build an additional image, using the new "calculator" image we just built. We'll use Dockerfile.test file for this purpose:

Here is the build command for the test image, named calculator-test:

Note: We're using the --rm flag to automatically remove the test container after the test finished because we don't need the test container anymore, and with a build machine, when many teams are building many images and testing containers, we want to reduce the disk space our build task is creating.

Here is the output from this run. Notice that the status is valid (0). 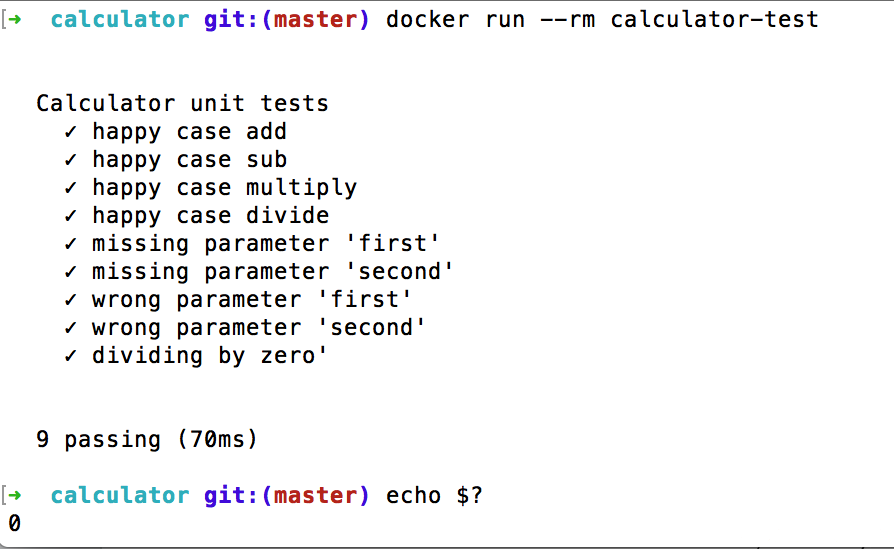 If some tests will fail, the status of this command will be not valid.

So, what has happened here? We have a container with the production code, as well as the required environment (node and NPM). We added some tests and development libraries and we ran these tests in the same environment production environment with the same code and the same version of libraries and frameworks. This is a great advantage of this method, because testing in a build machine like Jenkins (and only then build the Docker image) may lead to unexpected surprises in production, caused by changes in the environment.

As we saw above, the Docker run command of the test container, returns a status code of 0 (tests passed) or 1 (something went wrong). The meaning of this is that we can use this technique in a CI building system. Here is an example for a script in a Jenkins job that builds the image, tests it, and pushes it if the test passed. The script also updates the version of the software and update Git with the new version.

If the test will fail, the script exits with an error and both the Git push and the image push will not happen, and will not pollute the Git tags nor the docker repository with a broken version.