I have a hard time saying "no" to people at work. They're super passionate about their projects and the passion is contagious. Plus, I want to be helpful. As a result, my calendar eventually gets so packed with meetings that the mere act of looking at it makes me feel overwhelmed AF.

The worst are the "zombie meetings" – the ones that no longer do anything other than destroy your productivity but continue to live because nobody has figured out how to kill them. (There's a good chance any "weekly syncs" on your calendar are zombie meetings.)

Not long ago, I went through my tried and true re-focusing ritual where I identify what I love, loathe, long for, and learn from my work. No surprise that the "loathe" category was all about the sheer number of meetings I was in. I was drowning in forums, committees, catch-ups, councils, groups, squads, and drives. Everyone was carving out a little piece of me. My poor discipline was coming home to roost.

That Time I Deleted All My Meetings

Before I had a chance to talk myself out of it, I deleted all the recurring meetings on my calendar. Each meeting I threw out was accompanied by a note to the organizer, containing three options.

First, is this meeting a boomerang? If so, send it back to me but when you do, clarify the purpose of the meeting and what my role is. Am I there to be a provocateur? Do I own this? What will I add that nobody else can?

The second option was like a wobbly boomerang – it comes back, but not to me. The meeting should still exist, but someone else could add as much value as me, so I'm going to tap out and delegate it.

The third option was to consider the meeting a stick. (Because sticks don't come back when you throw them. Unless you have a dog...but I digress.) These are meetings that shouldn't exist anymore but still do just because we're really bad at killing meetings. We're only good at adding them. So there was just massive duplication.

Over the third of the meetings never came back. People were messaging me saying some version of "Hey, thanks for challenging us on this meeting. We're happy to let it die."

Of the meetings that did come back to me, just clarifying my role massively reduced my cognitive load. In most of them, I was turning up and performing a very different role than what was intended (mostly because I was on auto-pilot). Now I don't have to guess anymore, and my contributions to those meetings are far more valuable.

Best of all, I liberated several hours each week that can be spent on coaching and mentoring, which is what I love most and will unapologetically do more of. We spend too much time at work not to love what we're doing.

Calling a meeting is our knee-jerk reaction when we need other people to help us solve a problem or get work done. It’s amazing how rarely we stop to think through whether a meeting is really the best option – and, how rarely we think carefully about whether to accept a meeting invite! That's why so many meetings morph into mindless rituals that we sleepwalk through, but whose continued existence we accept as a fait accompli.

Some types of meetings are legit, others aren’t. Meetings should never be held for the sole purpose of sharing information. That’s what email, chat, and company intranets are for. In the best case scenario, a meeting’s purpose is to make a decision or create something collaboratively (a project plan, goals, customer journey maps, etc.).

At the very least, a meeting should center on a discussion that will be more effective in real-time than asynchronously via emails or comment threads – team or project retrospectives, brainstorming, and 1-on-1 meetings between managers and their direct reports, etc. 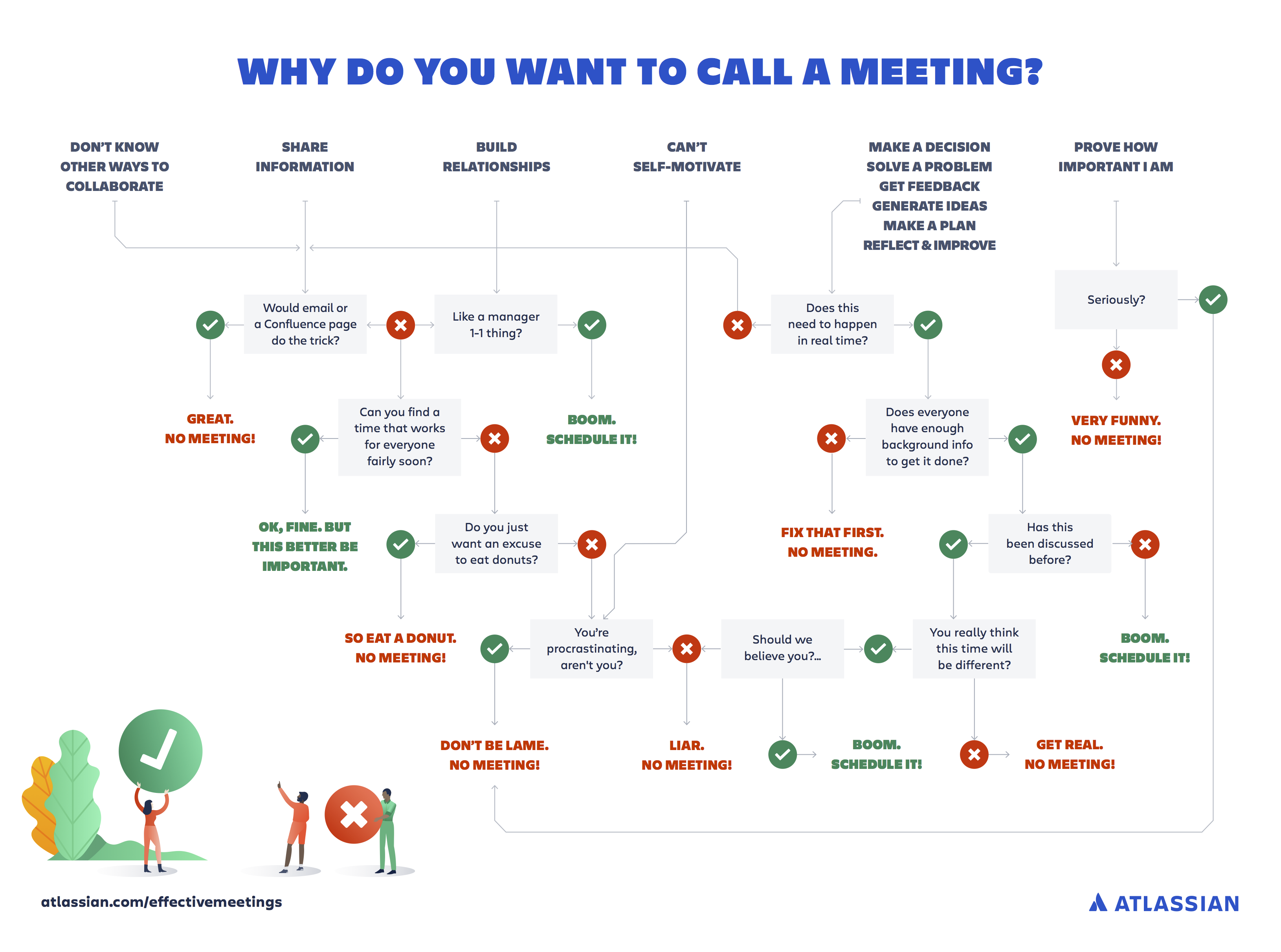 Before calling or accepting a meeting, get curious and ask some questions:

Make a habit of challenging the recurring meetings on your calendar. Questioning whether you need to attend isn’t rude. It’s smart. And questioning whether a meeting is needed in the first place is even better.