About two years ago, we’ve published this post about the 10 most popular DB engines, where we analyzed the data published by Solid IT on their DB Ranking website. In the meantime, the Solid IT measurement system has found to be a credible source, such that the website has also been cited at Gartner, InfoWorld, and many other sources.

Comparing the Top 10 list, we can see that the players have shifted, heavily:

Reproduced with permission of DB-Engines.com

The top three elephants are still Oracle, MySQL and Microsoft SQL Server, but the runner-ups have changed. While PostgreSQL is still gaining traction, it has lost grounds compared to MongoDB.

Also, Cassandra and Redis have pushed out Sybase and Teradata from the Top 10!

When two years ago, there had been only a single non RDBMS in this Top 10 list, there are now three, all “schema-less”, and they’re gaining additional momentum.

Clearly, vendors of RDBMS will need to move quickly to accommodate the needs of document storage and key-value storage the way their new competitors do.

For us on the jOOQ blog, a much more interesting perspective is to see where our supported databases currently are in this ranking: 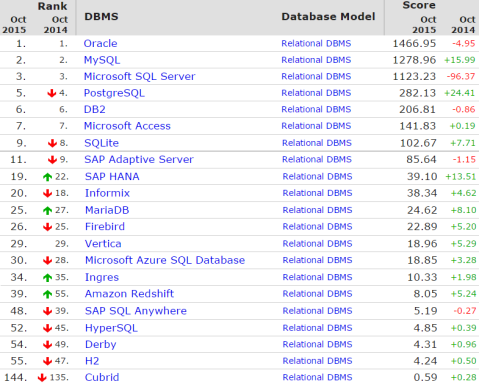 Reproduced with permission of DB-Engines.com

With the recent release of jOOQ 3.7, we’ve added another three databases to our list of now 21 supported RDBMS. Compared to last year’s ranking, almost all of these RDBMS are gaining traction as well, apart from SQL Server.

One thing is certain: we still have very exciting times ahead. Stay tuned for more updates, and check out the current ranking here.

Why Is Oracle and Microsoft SQL Adoption Low for Developers on AWS?

Everyone's Capable of a Performance Mindset