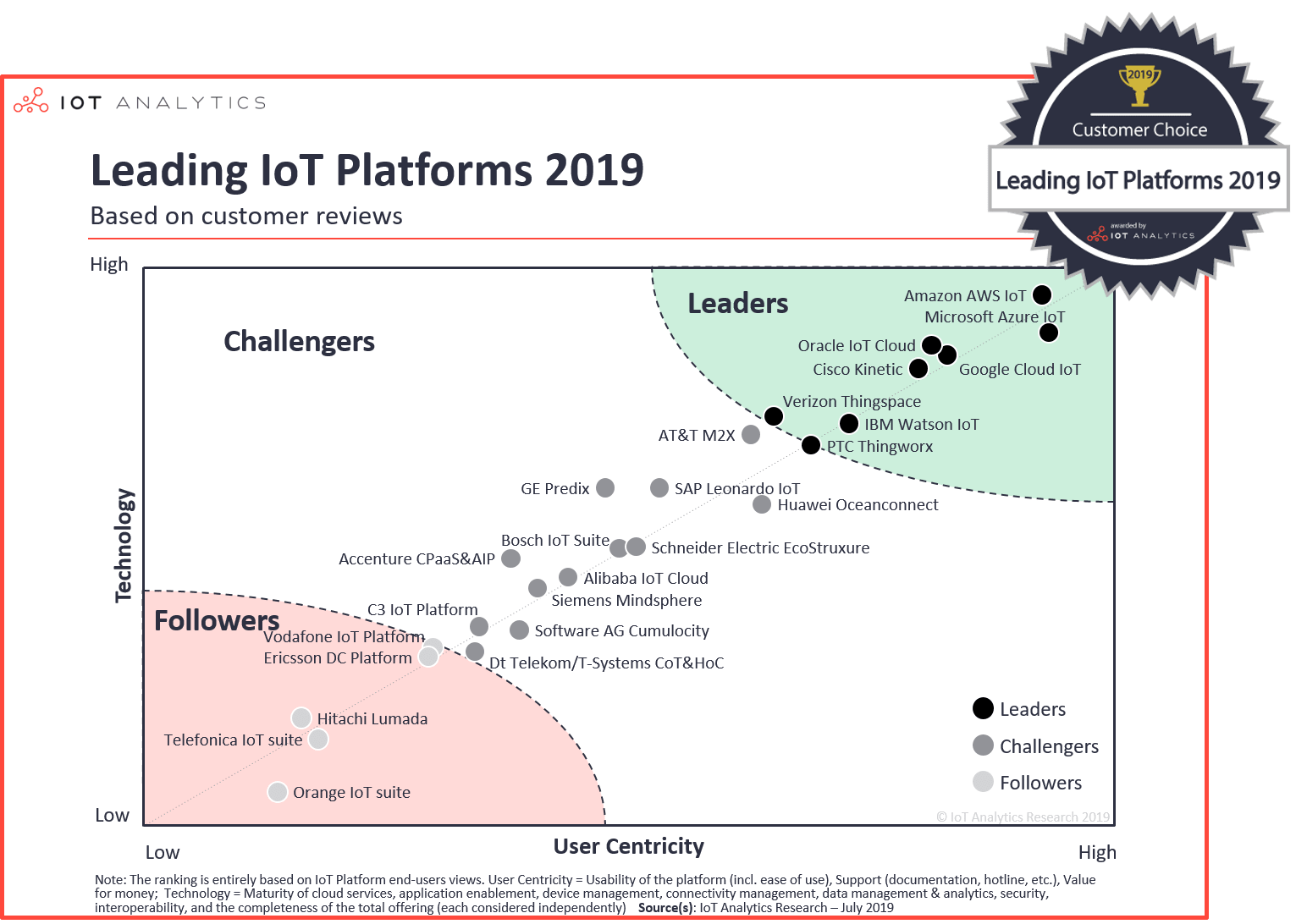 AWS and Azure take top spots. Amazon AWS IoT and Microsoft Azure IoT top the 2019 ranking of best IoT platforms as reported by users of those platforms. Out of the hundreds of IoT platforms on the market today, IoT Analytics shortlisted 50 and asked decision makers in organizations that have these platforms in use (or have tested them) how they made their platform selection decisions and what they did and did not like about individual vendors (on various different selection criteria). The top 25 platforms (in terms of popularity among those surveyed) made it into the final ranking.

Cloud firms dominate the ranking. Other providers of cloud technology also scored rather well, particularly Google, Oracle, and IBM. The common recurring themes for these vendors revolve around “ease of use”, “integration with other systems”, “scalability”, and great “support”. As a CTO of a municipality in Asia commented:

“The cloud platforms enable quick learning and setup along with practically immediate scalability. This ease of entry, usability, and integration with related platform services has led to a comprehensive offering particularly for collection, store and analysis of IoT data.”

Upcoming IoT Platforms. In order to understand how some of the smaller startups and SMEs are stacking up, the report has a dedicated section on “Upcoming Platforms”. Those providers are scoring particularly well with customers but are too small to be considered in the main ranking. The two providers that stand out are MyDevices Cayenne and Adamos. MyDevices scored particularly well for its user-centricity, Adamos stands out for its platform technology targeted at machine builders.

Co-opetition among providers. It is important to note that not all IoT platforms are completely comparable because features, capabilities, and sector strengths vary. In fact, some vendors may claim that another vendor is rather a “partner” than a competitor. This statement is particularly often made for cloud providers. The customer-view shows why: Many customers choose more than one IoT platform provider, often with a set of unique and a set of overlapping features. The recent announcement of Volkswagen to connect their factories (Industrial Cloud) through a combination of AWS/AWS IoT features and Siemens Mindsphere features is a good example of that.

IoT platform investments pay off. An overwhelming 80 percent of users reported positive ROI of their IoT platform investments. This shows how viable and important IoT platforms have become in 2019. The best IoT Platforms are often amortizing themselves in less than a year. This finding from the study is in strong contrast to other studies that have reported large numbers of failed IoT projects.

Variety of IoT platform use cases. Dashboards and general process improvement initiatives are the top cited use cases for IoT platforms. Condition Monitoring and Predictive Maintenance type of use cases represent the other top family of use cases cited.

“This study was purposely designed to take a very broad perspective of IoT platforms. We looked at a wide variety of providers and surveyed a rather senior audience. I am particularly stunned by the positive ROI that people are reporting. A couple of years ago, many people were claiming that the IoT is failing. The data coming from this study shows quite the opposite and indicates that the millions of dollars spent in recent years by IoT platform providers to build out the technology is finally starting to pay off.”

This report provides answers to the following questions:

A sample of the report can be downloaded HERE.

This survey has been designed to be as objective as possible. All respondents were randomly chosen from locations across the world and no responses were routed through any particular IoT Platform Vendors. All results are solely based on the survey findings and not the opinion of IoT Analytics analysts.