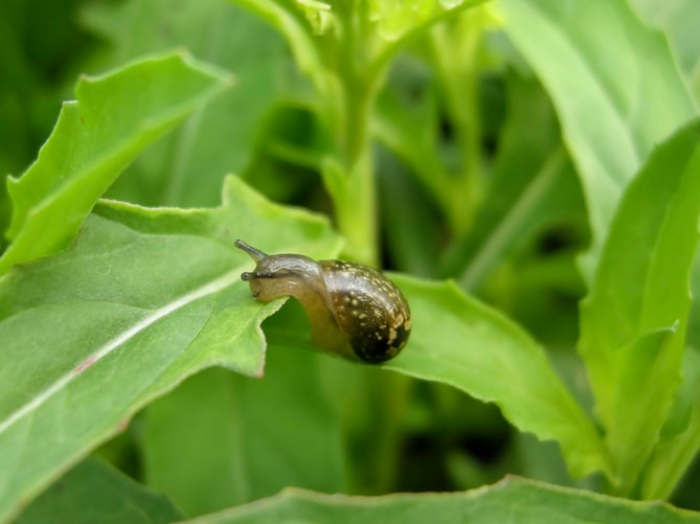 We all have to face challenged, especially with IoT!

As far as technical challenges go, the Internet of Things is as tough as it gets:

Today we take a detailed look at these three fundamental problems that every IoT platform must face. As an example of how to solve them in a real-world setting, we look at how we solve them in the Thingsquare IoT platform.

Scale: When Everything Is Large, All Bets Are Off

Many IoT deployments involve hundreds or thousands of individual devices. With large numbers of devices, even problems that normally would be unlikely to occur, are likely to occur.

Large networks are difficult to monitor in the field. But are even more challenging to work with during development.

At Thingsquare, we use these categories when we talk about the development of IoT networks:

The strategies that we use at Thingsquare to deal with these challenges are:

When dealing with large scale systems, you have very little visibility into what is going on.

When dealing with IoT devices, which are wireless and don’t have much ability to store and transport logs, you have even less visibility.

Simulation is an essential tool to circumvent this. We use simulation at several layers:

A simulation is a powerful tool, but it cannot replace development on real hardware.

Sometimes you need to develop for a physical sensor or actuator. Then you need real hardware to interact with.

But more importantly, a simulator will not behave in the exact same way as the real world. And if you develop your solution entirely in simulation, it will likely break when faced with reality.

At the Thingsquare offices, we have a set of testbeds of increasing size:

We use our testbeds both to develop new mechanisms and to continuously test our system. We can use them to replicate the behavior we have seen in customer installations. We can also use them in test patters to run larger networks than we could physically fit into our offices. 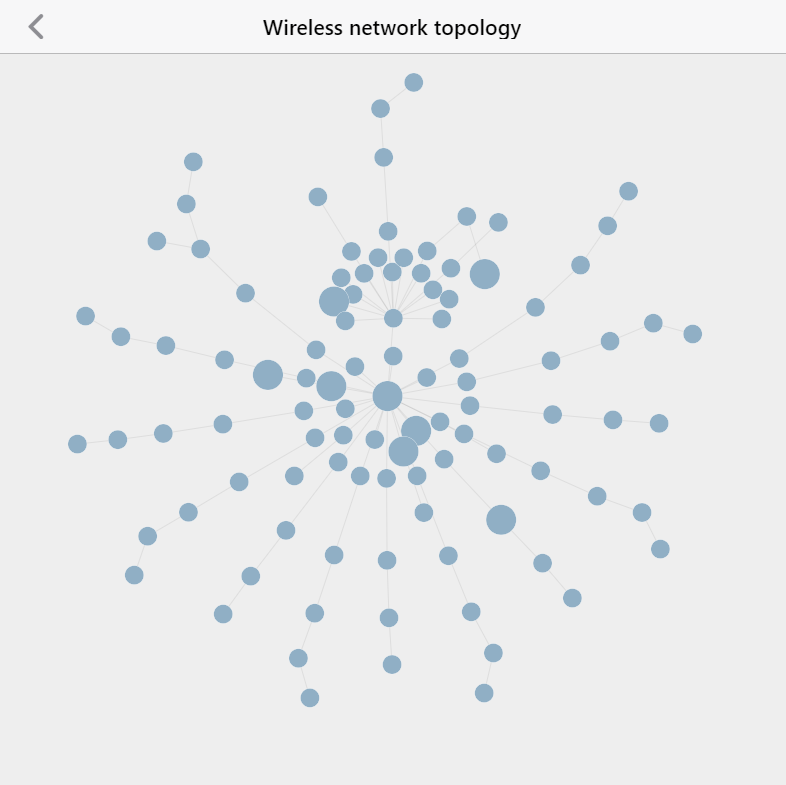 For low-power IoT devices, there is not much room to store and transmit full crash dumps.

At Thingsquare, we use a lightweight technique to collect crash reports from devices:

This makes it possible to build a database of the memory addresses that caused crashes and the specific code revision that caused it. This allows the developers to investigate and identify what caused the crash — and fix the issue.

Regression testing is a standard software development technique to ensure that the software does not break as it is developed.

An IoT platform consists of many types of components, from backend software to the wireless devices. To perform regression testing, every component needs to be tested both by themselves and as a whole. 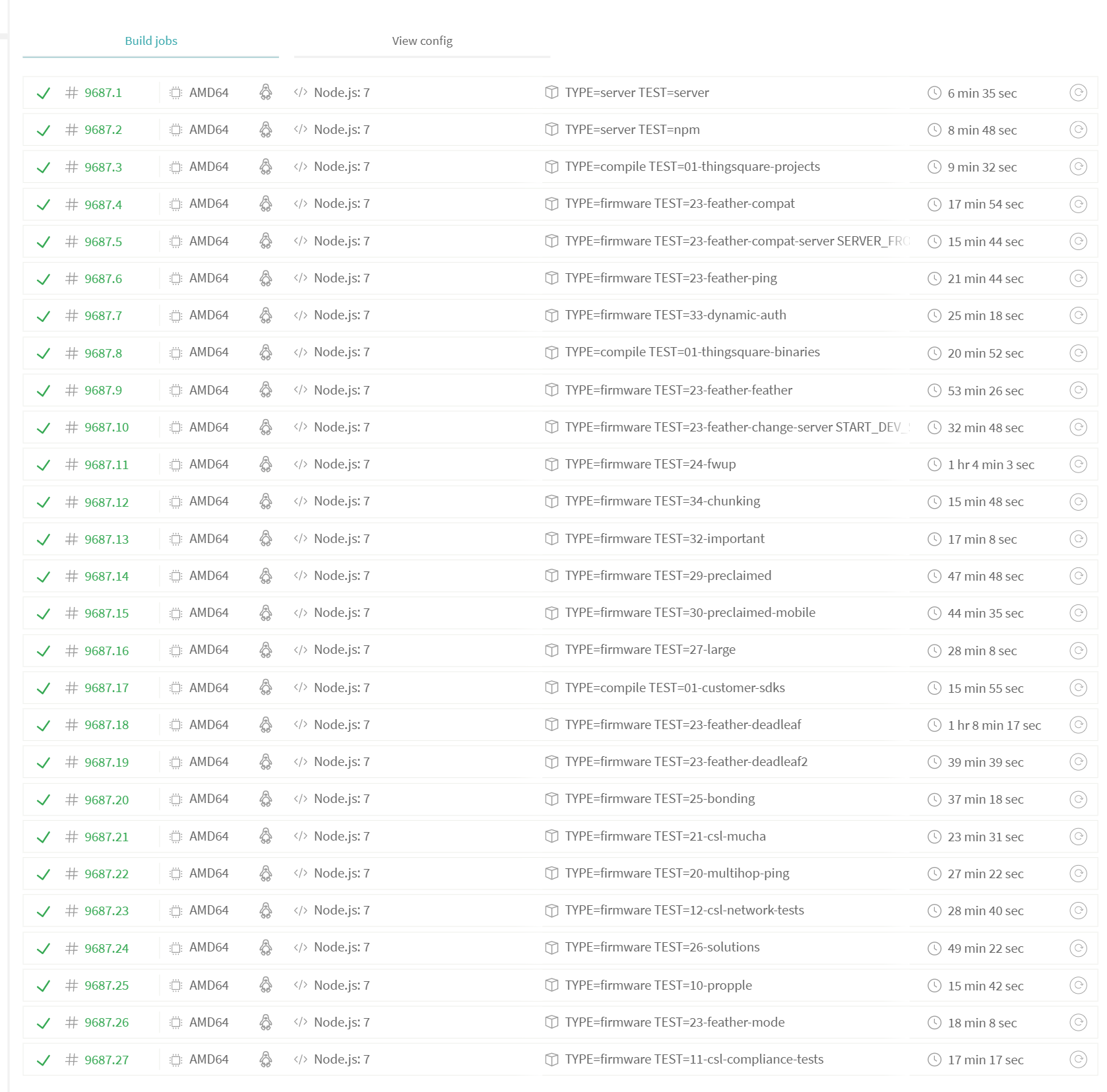 The IoT may be powerful, but few things are as powerless as an IoT device.

Power: There Isn’t Much of It

The IoT may be powerful, but few things are as powerless as an IoT device.

They are wireless, IoT devices need to run on batteries or solar cells. These power sources are weak. Really weak.

The power consumption must often be as low as the spontaneous discharge of the battery.

Power consumption is both a hardware and software issue. The hardware needs to be tuned the right way and support turning components off as much as possible. The software needs to know what to turn off and when – and when it is safe to do so.

In IoT, the trickiest part to get right is usually wireless communication. The radio draws a significant amount of power, but it is crucial so it can’t be blindly turned off. The radio draws as much power when it is listening as it is when it is sending. As network sizes grow, this becomes increasingly critical.

In the Thingsquare platform, we use a range of techniques to deal with the power problem:

Software-based power measurement allows us to continuously track the power consumption of each device.

Because the software completely controls the hardware, we only need to measure the time that each component is turned on to get a good estimate of the total power consumption. This data gets reported periodically by each device. 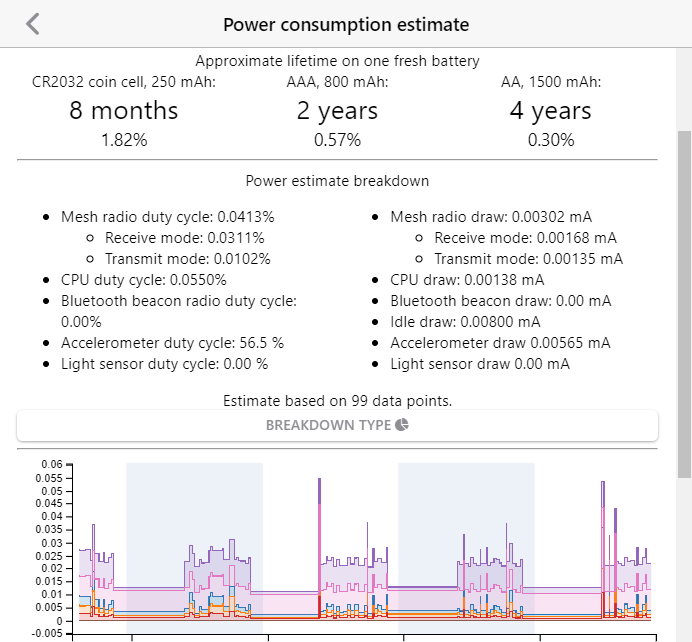 When the number of devices grows, it becomes increasingly difficult to monitor individual device’s power consumption. We then need to introduce automated tools.

We collect power data from every device, we can use anomaly detection to highlight devices that have an unusually high power consumption. These devices need to be looked at closer – there might be a bug that causes this problem. If we can find it during development, it won’t hit us as we deploy our solution.

Once we have identified a problematic device, we can dive into the details and look at the historical power consumption. We have found that averaging the power consumption over several timescales is useful: a 1-hour average is useful for spotting problems that repeat themselves over the course of a day, and a 24-hour average makes it easy to spot problems that occur in a weekly fashion.

Once we have identified that there is a problem, we can look deeper into why this happened. Without this ability to identify that there was a problem, this problem would have gone undetected and sneaked its way into production.

Wireless: It Is Weird

A lot of the IoT is about wireless networking. And wireless communication is weird.

One way to think about wireless communication is to think about it like light: it bounces around and gets obscured in unexpected ways. Wireless coverage may be good at one spot but bad just one step away. Just like the light from a lamp can be obscured, even close to the lamp.

Here is how we address these challenges in the Thingsquare system:

Mesh networking is a technique where devices help other devices to reach farther by repeating messages from others.

Instead of requiring that every device is in the range of the access point, this lets devices be spread out into a larger area. It also lets the network route around obstacles, automatically.

The Thingsquare platform uses IPv6 networking with the RPL mesh routing protocol. All nodes continuously measure the connection quality to their neighbors and may rearrange the routing graph if they find better quality links.

The mesh formation and maintenance processes are entirely automatic. So the network can be extended simply by dropping extenders into the network.

Frequency hopping is a way to avoid spending too much time on a specific wireless channel. This is needed because that channel may be used by other communication.

For some frequency ranges, frequency hopping is a regulatory requirement. Devices that do not properly switch channels must not be deployed.

The Thingsquare platform uses frequency hopping both to comply with regulations and to enable multiple networks at the same location. Each network has its own hop schedule, which makes the networks interfere as little as possible with each other. Separate networks also have different security keys, but keeping the frequencies separate makes the system more efficient.

The Internet of Things is a significant technical challenge because of the large scale of deployments, the power requirements, and wireless communication.

Fortunately, by using an IoT platform, you do not need to face these challenges directly. They should have already been solved by the platform.

Top 11 Cloud Platforms for the Internet of Things (IoT)

Published at DZone with permission of Adam Dunkels. See the original article here.