iOS application development companies can help you create apps for iOS system powered devices like iPhone and iPad. These are high-end smart devices available in the industry. Of course they are costlier too. But apps created for them doubtlessly remain profitable in all possible ways.

The trend of iOS apps isn’t going to fade out anytime soon and so the demand of iOS app development companies, too. A professional iOS developer utilizes latest tool and abides by the ongoing trends when it comes to building apps for iPhone and iPad devices.

So if you too are planning to launch your business or product on iOS, make sure the developer you hire is experienced in following technologies:

Almost all iOS Application development companies use it. Xcode is the only integrated development environment (IDE) provided by Apple to developers for building high performing iPhone and iPad native apps. It uses both objective-C and Swift as the programming languages. Expert programmers can do anything feasible on iOS devices using the Xcode platform by applying native development methods. The platform offers a huge set of libraries for a variety of apps. 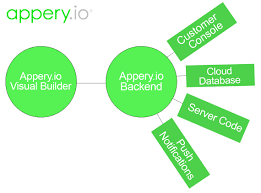 Appery.io is a cloud based mobile app building tool for iOS, Android and Windows Phone apps.  Appery.io is used by many developers for iOS app because this platform runs in cloud and there is nothing to download or install in a local system. So it’s quite easy to start with an iOS app development with Appery.io.

A lot of developers prefer GameSalad to create and launch iOS, OS X and HTML5 games. The drag and drop interface of the platform lets developers rapidly create games. It comes with features like Scene and actor editor which are used to create game apps.

Mobile Roadie lets developers build and manage both iOS and Android apps. It provides support to all media types and has an auto-refreshing fan wall allowing users to chat with each other in real time.

Appy Pie is another cloud based mobile app creation tool. It can also be used by those who do not have any previous programming experience. It can be used to create iOS, Android and Windows app as well as you can publish your app directly on stores like App store, Google Play, etc.

Microsoft owns Xamarin. This tool can be used to develop iOS apps with using C# codebase. Apart from iOS apps, it can also be used to create Android and Windows apps. In fact, Xamarin is a cross-platform application building platform.