in part 1 , i discussed order-of-magnitude estimates and targets. in part 2 , i showed how estimates can be misused. in this part, i’ll discuss when estimation is useful. here are several possibilities:

estimates can be useful when they help people understand the magnitude of the problem.

one of my previous practical product owner students said, “we use story size to know when to swarm or mob on a story.” people tackle stories up to 5. (they use fibonacci series for story size.) they might pair or swarm on stories starting at size 8. even if they have a 21 (or larger) size story, they swarm on it and finish it in a couple of days, as opposed to splitting the story.

they use estimates to understand the size and complexity of the feature. (i would call their features “feature-sets,” but they like to call that one big thing a feature.)

you might not like that approach. i think it’s a fine way of not fighting with the po to split stories. it’s also helpful to work together to solve a problem. working together spreads knowledge throughout the team, as a team.

my experience with estimation is that it’s easy for me to not understand the magnitude of the work. we manage this problem in agile/lean by estimating together, or working together, or with timeboxing in some way.

the first time we solve a particular problem it takes longer. the first time i worked on a control system (embedded software), i had to learn how things worked together. where did the software interact with the hardware? what were the general risks with this kind of a product? the first time i self-published a book, everything took longer. what were the steps i needed to finish, in what order?

i worked on many control systems as a developer. once i understood the general risks, my estimates were better. they were not sufficiently accurate until i applied the rules of deliverable-based planning . what deliverables did i need to deliver? (i delivered something at least once a week, even if it was data from what i now know is a spike.) what inch-pebbles did i need to create that deliverable?

one of the things i like about agile and lean is the insistence on small chunks of value. the smaller my chunk is, the more accurate my estimate is.

we have possible risks in many deliverables. we have the general risks: people get sick, they need to talk the duck, they multitask. but each deliverable has its own risk.

i’ve said before software is learning, innovation. you may have done something like this project before, so you have domain expertise. but you have probably not done this new thing here.

i can’t get to the problems unless i have inch-pebbles. i am a big-picture person. i see the whole problem, possibly even the whole solution, and i skip some of the steps in my head. i estimate top-down as a start. unless i create my inch-pebbles, i am likely to gloss over some of the risks because i start top-down.

you might not be like me. you might estimate bottom-up. you might see all the details. you might not miss any steps in solving the problem as you think about it. (i wonder about people like you. do you see the big picture at the beginning or does it evolve for you?)

i have met some people who estimate inside out. they tell me they see part of the big picture and part of the small steps. they iterate on both parts until they see and can estimate the whole thing.

i have taught a number of estimation workshops. most of my participants are top-down people. they see the result they want and then envision the steps to get there. i have met some small number who start bottom up. i have met two people who are inside-out. i don’t know if that’s a normal distribution or just the people who participate in my workshops.

when people think about the first thing that can provide value and they think about how to make that first thing small (either inch-pebbles or agile stories), they can more easily see what the first deliverable could be. they can discuss the deliverable progression (in agile with a product owner and in a more traditional life cycle with a project manager or a product manager).

i have found the discussion of deliverable progression very helpful. many years ago, i was the lead developer for a gauge inspection system (machine vision on an assembly line). i asked the customer what he wanted to see first. “can you see the gauge enough to give us some kind of an answer as to whether it’s a good gauge?” was his answer.

notice he said “enough,” not “a perfect inspection.” we did a proof of concept in a couple of days. in the lab, with the right lighting, we had an algorithm that worked well enough. you might think of this as a discovery project. based on that deliverable, we got the contract for the rest of the project. if i remember correctly, it took us close to six months to deliver a final system.

for that project, i acted as a cross between a project manager and what we now call a product owner. we had release criteria for the project so i knew where we were headed. i worked with the customer to define deliverables every two weeks, after showing a demo of what we had finished every two weeks. (this was staged delivery, not agile. we worked in week-long timeboxes with demos to the customer every two weeks.)

this is in the days before we had project scheduling software. i drew pert diagrams for the customer, showing date ranges and expected deliverables.

a few years ago, i coached a project manager. she was the queen of the gantt. she could make the gantt chart do anything. i was in awe of her.

however, her projects were always late—by many months. she would work with a team. they would think it was a six-month project. she would put tasks into the gantt that were two-, three-, and four weeks long. that’s when i understood the problem of the estimation unit . “if you measure in weeks, you’ll be off by weeks.” her people were top-down thinkers, as i am. they glossed over some of the steps they needed to make the product work.

i explained how to do deliverable-based planning with yellow stickies. the people could generate their tasks and see their intersections and what they had to deliver. she and the team realized they didn’t have a 6-month project. they had a project of at least a year, and that was if the requirements didn’t change.

when they started thinking about estimating the bits, as opposed to a gross estimate and applying a fudge factor, they realized they had to spend much more time on estimating and that their estimate would be useful. for them, the estimation time was the exploration time. (yes, i had suggested they do spikes instead. they didn’t like that idea. every project has its own culture.)

how do your estimates help you?

maybe your estimates help you in a specific way that i haven’t mentioned. if so, great. 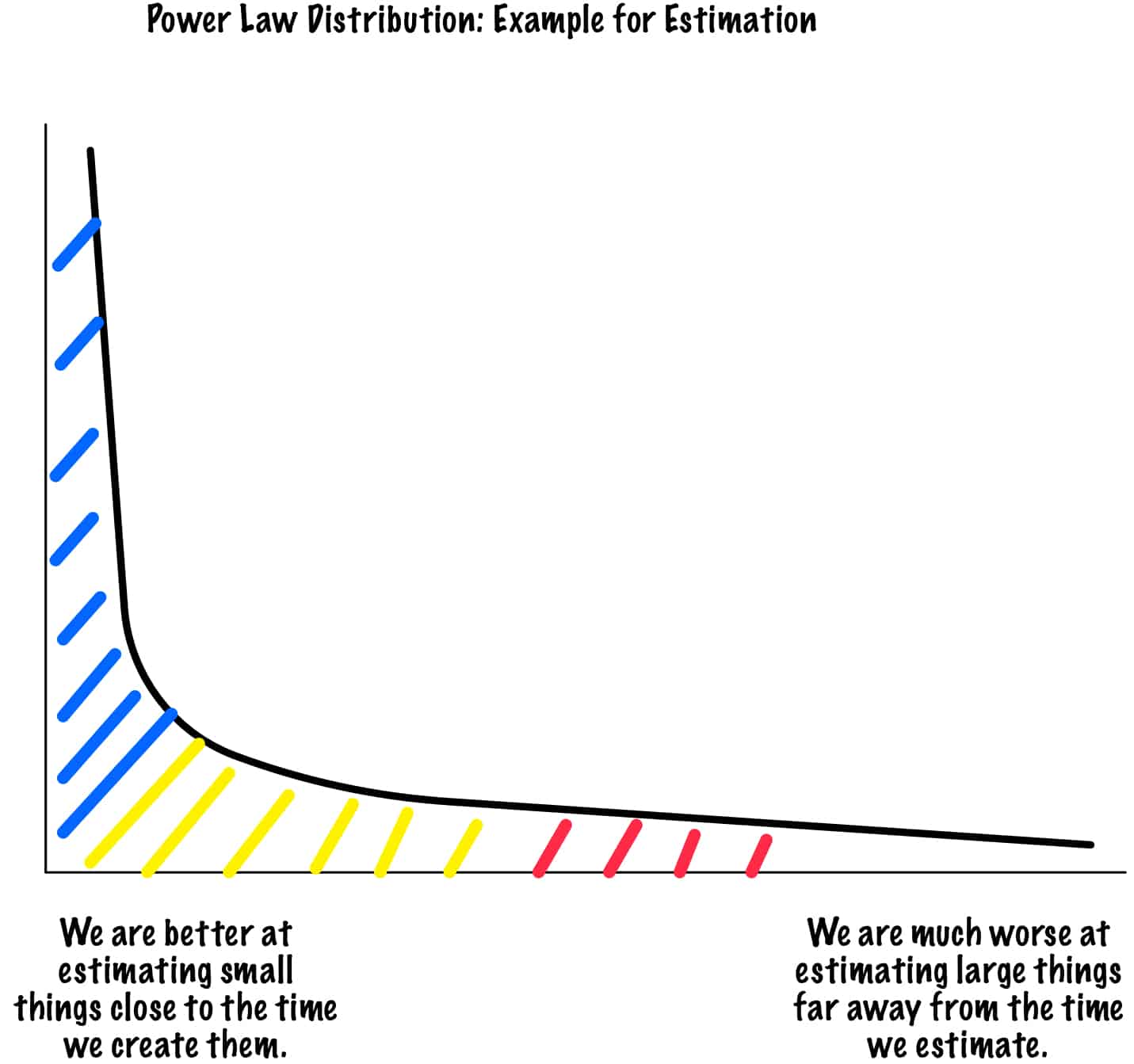 the problem i have with using estimates is that they are quite difficult to get right. see pawel brodzinski’s post, estimation? it’s complicated.

in predicting the unpredictable , i have a chart of how my estimates work. see the power law distribution: example for estimation.

in my measurements with my clients and over time, i no longer buy the cone of estimation. i can’t make it work for agile or incremental approaches. in my experience, my estimates are either off by hundreds of percent or i am very close. we discover how much i am off when the customer sees the first deliverable. (in bossavit’s leprechauns of software engineering , (or on leanpub ) he says the cone of estimation was never correct.)

for me, deliverables are key to understanding the estimate. if by estimating, you learn about more deliverables, maybe your estimation time is useful.

since i use agile and lean, estimating time for me is not necessarily useful. it’s much more important to get a ranked backlog, learn if i have constraints on the project, and deliver. when i deliver, we discover changes in requirements, that we have done enough, etc. my delivery incorporates feedback. the more feedback i get, the more i can help my customer understand what is actually required and what is not required.

i realized that i need a part 4, that specifically talks about noestimates and how you decide if you want to use noestimates. enough for this post.