Of all the collection types in Java, the list is arguably the most popular due to its ordered characteristics, allowing developers to insert and retrieve elements at a specified index and to sort elements according to specified criteria. In this article, we continue The Developer's Guide to Collections series with an examination of the list collection, focusing on the conceptual idea of a list in Java, the List interface and how its overridden methods differ from those of the Collection interface, supporting interfaces, and the concrete list types (and their respective advantages and disadvantages).

The reader should note that this article uses the common mathematical convention for indices, where i is some arbitrary index, n is the size of the indexed entity, square brackets are used to denote inclusive ranges, and parentheses are used to denote exclusive ranges. Also note that while this article uses notation and illustrations that are normally associated with linked lists (such as previous and next relationships), not all lists are implemented as linked lists; some lists may internally use arrays while others are free to use whichever internal implementation is most suited for the task at hand.

Before diving into the technical aspects of a Java list, we must first define what a list is and the problem it is intended to solve.

A list is simply a collection with ordered elements. By ordering each element, a sequence of elements is created, allowing clients to insert, update, access, or remove an element at a specific index. This concept is illustrated in the figure below:

The indices of a list are 0-indexed, ranging from 0 to n - 1, where n is the size of the list. Therefore, the element at the first location in the list, or head, has an index of 0 while the element at the last location in the list, or tail, has an index of n - 1. Due to this indexing, new semantics are introduced in lists that are not available in general collections:

In addition to new index-based functionality, the list also introduces a new iterator. Unlike the general iterator, which is unidirectional (advances only in the forward, or next, direction), this list-based iterator allows for bidirectional traversal, adding a concept of a previous element. We will look at this iterator in more detail when we cover the List interface, but it suffices to note that the inclusion of order requires that a more nuanced iterator be created.

Appart from index-based semantics, the sequentiality of lists also allows clients to sort a list, moving some elements forward (to a higher index) in a list and moving other elements backward (to a lower index). In general, sorting is performed in two ways: (1) Using an explicit comparator object that takes two elements of equal types and determines if the first is before, equal, or after the other, or (2) natural ordering, where elements are directly compared to one another to determine if they are before, equal, or after other elements in the list. The default implementation for list sorting uses a merge sort algorithm, resulting in O(n) = n log(n). While this algorithm suffices for most list implementations, some implementations perform optimizations based on the internal data structure used to represent its sequence of elements.

Lastly, the lists can also replace each element in-place using a transformation function, where the input type and the output type of the transform are the same: T(ainput) → aoutput. Combining these responsibilities together, we can devise the additional functionality that makes up the List interface. Before delving into the functionality particular to lists, we will first examine the complete List interface, including the functionality inherited from the Collection interface.

The complete List interface for Java Development Kit (JDK) 9, including the methods inherited from the Collections interface (with comments removed) is listed below:

In a similar fashion, the hash code for a list is a composition of the hash codes of each of its elements, as dictated by the following algorithm:

For more information on the use of the magic number 31 in the hash code computation above, see Effective Java, 3rd Edition (Item 11, pp. 50). The last override that is performed of Collection methods is that of the spliterator method, whose List default implementation is listed below:

This required method replaces each of the list elements in-place according to the supplied UnaryOperator. These replacements are performed by obtaining a list iterator (see the listIterator section below) and setting each value of the iterator to the return value of the supplied UnaryOperator. The default implementation for this method is defined as follows for JDK 9:

For reference, the JDK 9 effective interface for UnaryOperator is defined as follows:

Note that the apply method is not actually present in the UnaryOperator interface, but rather, is defined in the Function interface. In general, the Function interface performs a transformation of some input of type T to some output (return value) of type R. In the case of a UnaryOperator, the input type and return type are both of type T and thus, acts as a transformation that does not alter the type of the input, only its state (or replaces the input with some other object of type T).

This method is optional and is algorithmically composed of the following steps:

This algorithm is reflected in the JDK 9 default implementation for the List sort method:

The Comparator interface used to determine the ordering of each element is defined in JDK 9 as follows (note that the default method implementations associated with this interface have been removed to enhance the focus on its single abstract method):

The compare method takes two objects of type T and determines if the first parameter is less than, equal to, or greater than the second parameter according to the return value of the method, which is defined as follows:

Similar to the indexed addAll method, this optional operation inserts a single element at the supplied index. All existing elements in the list after the supplied index will have their indices incremented by one, as illustrated in the figure below. 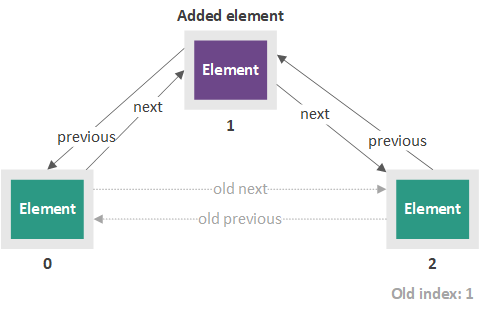 Analogous to the indexed add method, this optional operation removes the element at the supplied index. This process is illustrated in the figure below. 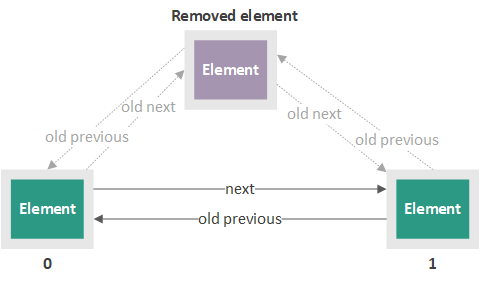 The indexOf method returns the index of the first element that equals the supplied object (in terms of its equals method) in the list. If no matching element is found, -1 is returned. Likewise, the lastIndexOf method returns the index of the last element that equals the supplied object, or -1 if no matching element could be found. Note that if only one matching element is present, or if the List implementation does not support duplicates, the same non-negative index will be returned by indexOf and lastIndexOf.

Although the general Iterator can be obtained from a List and is still usable, the ordered semantics of a List requires that a more fine-grained iterator be developed for a List. This more detailed iterator is the ListIterator and is defined as the following in JDK 9:

While the general Iterator is unidirectional and only has a concept of traversing to the next element, the ListIterator is bidirectional and has the concept of traversing to the next or previous element in a List. Additionally, a ListIterator has a concept of the current location in a List. For example, a ListIterator can be started relative to a supplied index (using the listIterator(int) method in the List interface). It is important to understand that a ListIterator does not maintain its positional information (cursor) based on the elements in a List, but rather, relative to the positions between elements. This concept (depicting the possible location of the cursor) is illustrated in the following figure.

When a ListIterator is given a starting index, the cursor is positioned such that the next element of the iterator points to the element at the given index and its previous points to the element before the given index. For example, if a ListIterator is started with an index of 1, the cursor would be positioned as illustrated in the following figure.

In general, a ListIterator started at index i will have its next equal to the element at index i and its previous equal to the element at index i - 1. In addition to traversal methods, ListIterators also have optional operations to add, set, and remove an element at the given cursor location. For example, if the cursor is positioned between elements at index a and b, calling add will result in the added element being positioned such that its next is the current next element and its previous is the current previous element, as illustrated in the figure below. 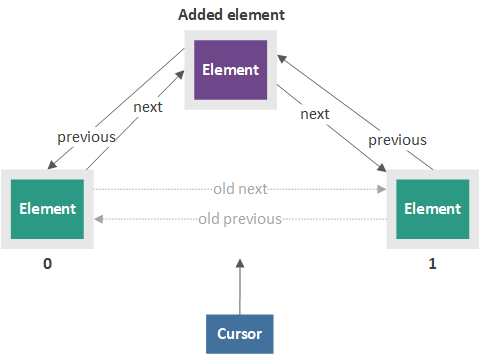 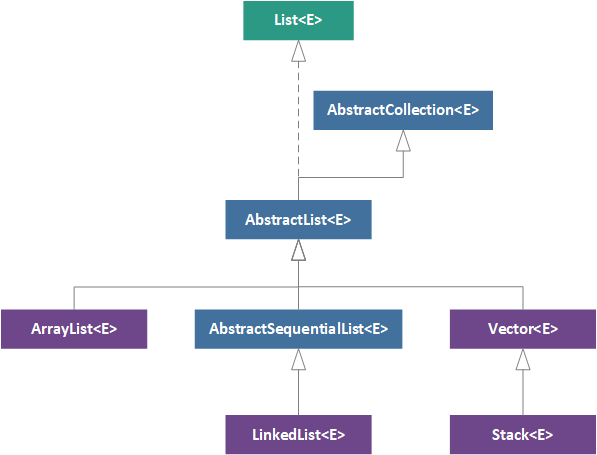 An ArrayList is a general-purpose List implementation that is backed by an internal array that expands to store the elements of the list. At any given time, the length of the internal array is called its capacity and may be greater than or equal to the size of the list (the number of elements in the list, not the size of the array used to store the elements). For example, it is possible that an ArrayList contains 10 elements, but its capacity is 12 (enough to store the 10 elements).

Additionally, the ArrayList class implements all optional operations in the List interface and allows for any element, including duplicates and null elements, to be added. An ArrayList is essentially a Vector without the overhead of synchronization. Unless there is a specific need to use a Vector, an ArrayList should be used in place of a Vector. For more information, see the official ArrayList documentation.

A ListedList is a doubly linked list that allows for bidirectional traversal of the elements in the list. This internal doubly link representation is based on the private static Node class, which includes a data field (called an item) of the type of the elements in the LinkedList (matching the type of the formal generic parameter of the LinkedList), a previous link, and a next link, as illustrated in the listing below.

The LinkedList class also implements the Queue interface (which will be discussed in a later article in this series) and includes the following methods not included in List interface:

For more information on the LinkedList implementation, see the official LinkedList documentation.

The following table captures some of the trade-offs and benefits of each of the standard List implementations covered in this section:

Lists are one of the most frequently used collection types, and for good reason. By definition, lists are ordered and its elements can be randomly accessed by index, as well as traversed through a special-purpose ListIterator. In addition, due to the ordered nature of a list, the elements in a List are sortable by either an explicit Comparator or through natural ordering. While some of the mutation methods (such as add) are optional operations, the two most common List implementations, ArrayList and LinkedList, provide implementations for all of these optional operations. Although we have not covered every aspect of the List interface and its various implementations, we have covered a wide breadth of knowledge that will allow us to start in the correct direction, digging into the official documentation where needed. In the next entry in this series, we will cover one of the more mathematical collection representations: The set.