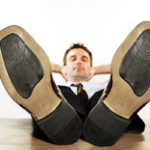 It's often said that we leave jobs in large part because of the bosses we worked under. There are many things about a bad manager that can prompt our wrath, but perhaps the foremost sin is to be workshy. New research from the University of Exeter highlights just how pernicious working under a lazy manager can be to our well-being and productivity.

The researchers wanted to examine the impact of having a lazy boss on the team working under them, both in terms of their mentality and productivity. The analysis revealed that leaders who regularly procrastinate both in doing tasks and making decisions result in lower commitment levels among employees. More worryingly, it also saw an increase in mendacious behaviors among staff.

For instance, unnecessary sick days rose, as did acts of theft and general slacking off themselves.

"We have found procrastination from managers can be really detrimental to their staff and companies need to take action to ensure there are better relationships between bosses and employees," the authors say. "When bosses fail to do their work, knowing this will cause problems for others, it causes their staff to become frustrated and leaves them less committed to their employer."

The findings emerged after an analysis of nearly 300 employees, with a specific focus on how the behavior of their leader impacted their own workplace behaviors. Each employee was asked to rate the efficiency of their manager, using questions such as, "My manager delays making decisions until it's too late."

The data suggests that procrastination from bosses leads to deviance in staff. The researchers believe that a degree of "managing up" should be deployed, with staff seeking to learn why their managers procrastinate, and to take a more active role in decision making.

"We found employees are less likely to be frustrated by their leader's procrastination if they had a good relationship with that leader," the researchers conclude. "Encouraging feedback sessions, such as 360-degree feedback, may help leaders to become more aware of their own behavior, and sharing leadership could reduce the effect of a procrastinating leader."