the future of ethernet – 2016 roadmap released by ethernet alliance

the ethernet alliance has announced their 2016 roadmap of enhancements for ethernet. 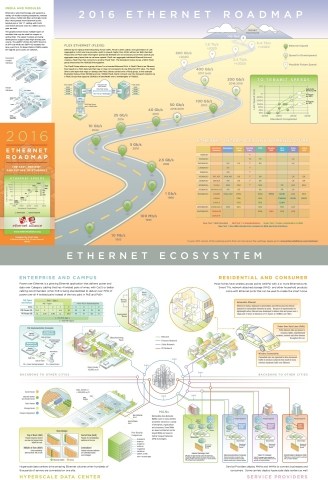 who is the ethernet alliance

the ethernet alliance ( @ethernetallianc ) is an industry trade and marketing consortium focused on the advancement and success of ethernet-related technologies.

where to learn more

the ethernet alliance has also made available via their website two presentations part one here and part two here (or click on the following images).

what this all means

ethernet technologies continue to be enhanced from consumer focused, internet of things ( iot ) and internet of devices ( iod ) to enterprise, data centers, it and non-it usage as well as cloud and managed service providers. at the lower end where there is broad adoption, the continued evolution of easier to use, lower cost, interoperable technologies and interfaces expands ethernet adoption footprint while at the higher-end, all of those iot, iod, consumer and other devices aggregated (consolidate) into cloud and other services that have the need for speeds from 10gbe, 40gbe, 100gbe and 400gbe.

with the 2016 roadmap the ethernet alliance has provided good direction as to where ethernet fits today and tomorrow.