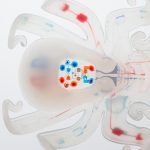 bringing robotics into the surgical process has been a considerable motivation for researchers in recent years. for instance, at the back end of last year, i wrote about a new robotic surgeon that had been developed by a team from the john a. paulson school of engineering and applied science and the wyss institute for biologically inspired engineering.

the team was trying to develop tactile robots that could adequately perform the kind of fiddly work so often required in surgery.

“current conventional fabrication techniques limit the complexity and the sophistication of these millimeter-sized sensors while significantly driving up the cost of assembly and implementation,” the team said. “this poses a barrier to widespread adoption of force-sensing soft robotic surgical tools that can perform minimally invasive and complex surgeries in an inherently safe way.”

or you’ve got startups like virtual incision, who are attempting to take surgery inside the body .

they have trialed what is believed to be the first miniature robotic device for surgery to help remove cancerous growths in a patient in paraguay.

the device is incredible because rather than operating on the patient from the outside, the robots are actually doing their work from inside the patient. they are fed into the body via a small cut in the abdomen and then tackles its work using many of the tools doctors are already familiar with.

“to the best of our knowledge, this is the first time an active miniaturized robot has performed complex surgical tasks with the robot inside a living human, which is a significant milestone in robotics and in surgery,” the company says.

or you’ve got the smart tissue autonomous robot (star) that’s been developed by a team in washington d.c.

just as with the wyss team, they have been working on increasing the capability of the robot to perform nimble and delicate procedures, with the eventual aim being to supersede that of even the best human surgeons.

the team uses 3d imaging and impressive force sensing capabilities to stitch wounds to a submillimeter level of precision. it was created using experienced surgeons as teachers, with the eventual aim of surpassing the capabilities of its mentors.

the project, which has been documented in a recently published paper , offers the tantalizing prospect of an automated and hugely accomplished surgeon to perform the 45 million or so such operations undertaken in the us alone each year.

the latest in this line of so-called soft bots is from harvard and goes by the name octobot. their project highlights both the progress made in robotics and also in the manufacture of the robots.

the device is untethered, and thus completely autonomous. it requires no electrical power, nor any form of control system to operate. instead, the power comes via chemical reactions between hydrogen peroxide and platinum. this forms a gas that flows through the machine to provide it with power.

now, it should be said that the device is unlikely to be put into operation for a while yet, not least because the movement of its arms are limited to simple up/down movements. it is, however, a nice progression in the field, and a sign of the progress being made.

the design of the robot is unashamedly borrowed from that of an octopus, with the researchers hoping to borrow from the strength and range of movements of the creature, all achieved without a skeleton.

this new wave of more flexible, dexterous robots opens up a range of new possibilities in surgical environments as they offer a much richer range of movement and flexibility. we’ve already seen robotic surgery take place, but this was typically tethered to a power source and operated by human surgeons, so the octobot is a nice progression on both counts.

whilst it’s still at a very early stage therefore, it’s an important step forward nonetheless. check out the video below to see octobot in action.