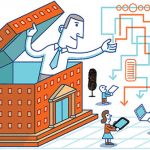 i wrote recently about a fascinating new report by the european data portal that examined the state of open data throughout europe. the paper reveals that the 31 countries collectively made significant progress between 2015-2016, with an average progression of 28.6% over the year. whilst this means that most countries have a basic level of open data by now, the report still highlights significant discrepancies between countries.

a similar project is run on a global scale by the global open data index (godi) . the annual benchmarking project is run by the open knowledge network and utilizes a crowdsourced survey to measure the openness of government data around the world.

the findings from the latest version of the index revealed a number of key trends.

open data is typically the final stage of the information production chain, where governments measure and collect data, process and share data internally, and publish this data openly. as such, the index revealed that gaps exist, whether in the collection of data, the information infrastructure, or even information systems in the first place.

despite various data portals and registries existing, it’s still common for different departments to publish in wholly different ways and to different locations. what’s more, they also often operate under different protocols, licenses, and formats, which presents a significant challenge for finding the data you need.

open data licenses are supposed to ease access to data, but the authors suggest that they often muddy the waters instead. on the one hand, more governments implement their unique open data license versions. some of them are compliant with the open definition, but most are not officially acknowledged. on the other hand, some governments do not provide open licenses, but terms of use, that may leave users in the dark about the actual possibilities to reuse data.

a final issue to overcome revolves around presentation. in many instances, data might be available online, but it is not presented in an accessible manner. the crucial thing with open data is that it’s reusable, and so governments need to ensure they produce and provide data that is in good quality for reuse in its raw form.

suffice to say, the index is only really useful if it sparks debate about open government data, and the numerous issues surrounding it. which regulations and laws prevent data from being published? which government procedures block open data release? why does individual data matter for different publics? and how do we align the priorities of the public with those of government?

whilst i suspect there are those for whom such questions are incredibly important, it seems equally clear that the desire for open data hasn’t crossed the chasm into the mainstream yet. given the relative immaturity of the movement, however, that is perhaps to be expected, and the index provides some clear areas for governments to improve upon in the future.